Some of the Arab-Israeli politicians who are in the opposition might opt against serving as a political security net for the very destabilized government of Naftali Bennett. 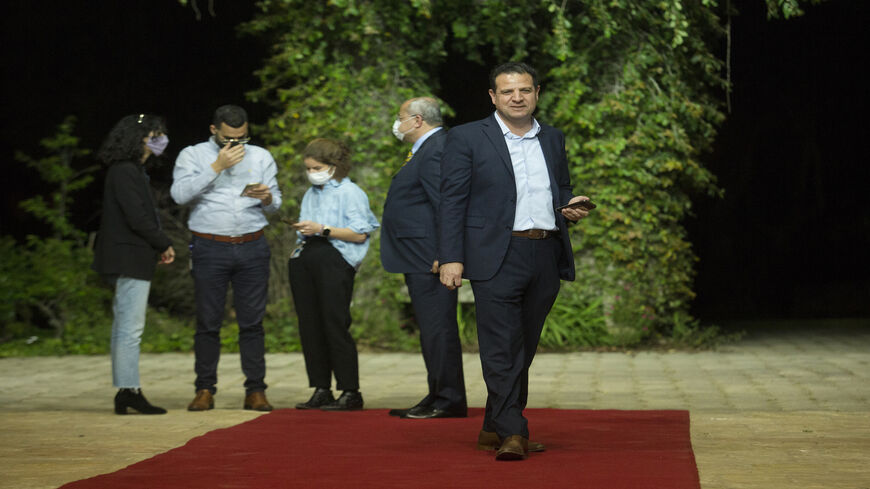 Interior Minister Ayelet Shaked attacked this morning head of the Arab Joint List opposition party Ayman Odeh. “Ayman Odeh incites against the State of Israel and its institutions. We won’t make agreements with him. His place is outside Israel’s Knesset,” tweeted Shaked. The minister was reacting to a video posted on Facebook yesterday by Odeh from the Damascus Gate in Jerusalem’s Old City, for the month of Ramadan. Odeh argued that Arab-Israelis  serving in the security forces were humiliating their own people and called on them to throw down their weapons and to quit their positions.

This incident may have great implications for the stability of the coalition, which is already very much at stake. On April 6, Knesset member Idit Silman of the Yamina party, which is headed by Prime Minister Naftali Bennett, announced she was quitting the coalition and joining the opposition. Her move left Bennett without the narrow majority he had so far in the parliament, of 61 legislators out of 120. Yesterday, Silman closed the door to all attempts to convince her to retract her decision and stay in the coalition. An announcement she issued said, “The decision to end my path in the current coalition is one of principle and thus it is final. I call on my colleagues in the coalition and the party to express the majority of the Israelis’ position and form a Zionist and nationalist government in the current Knesset.”

Bennett is now faced with a draw in the Knesset, instead of a majority. Still, the opposition is composed not only of right-wingers supporting opposition head Benjamin Netanyahu and eager to topple Bennett. There are also the six Knesset members of the Arab Joint List. Party leaders wish for the current government to fall in order to see their rivals from the Muslim Ra’am party, headed by Mansour Abbas, fail in their mission to integrate into the coalition. That being said, they also know that the voters they represent do not wish for Netanyahu to return to power.

This is in fact the headache experience by some of the members of the Joint List: On the one hand, they would not shed tears over the dissolution of the Knesset and the collapse of the government headed by Bennett, while also hurting Ra’am’s campaign to benefit the Arab community.  On the other hand, they would not wish to be known as having indirectly helped return Netanyahu to power.

Signs of this dilemma could be seen already on the day of the swearing in of the Bennett-Lapid government in June 2021. Joint List seniors Ayman Odeh, Ahmad Tibi and Osama Saadi were absent from the first round of votes at the Knesset plenum, so they did not vote against toppling Netanyahu or against the new government. Instead, they waited to see that the government does have majority. Only then they entered the plenum, for the second voting round, where they voted no. De facto, the Joint List served as a kind of “security net” for the current government, although none of them would say it out loud.

However, we should recall that three parties make up the Joint List — Balad, Ta’al and Hadash — and there is no single voice that represents all six members. Interviewed about the current coalition crisis, Knesset member Sami Abu Shehadeh from Balad said April 10, “I don’t think an election is the worst thing that could happen because there is a good chance that the Joint List would strengthen.” Knesset member Aida Touma-Suleiman of Hadash announced after Silman’s departure from the coalition, “I would have dissolved the current government from the moment it continued to expand the settlements, deepen the occupation, steal land and oppress my people.” Odeh himself said April 9, “I am happy that after a whole year when we were in the political desert everyone is courting us and this is a nice thing.” Still, he refuses to commit to vote to dissolve the Knesset. “If someone thinks we would cooperate with Netanyahu for a constructive no confidence vote, there’s no chance,” he continued.

How has coalition party Ra’am responded? Abbas discussed the new political situation in an interview on the N12 channel and declared, “What worries me today is whether we can maintain the influence we have and the achievements we have made for the Arab community, and this is what concerns me. I won’t enter a government with Netanyahu, the current partnership hasn’t run its course. If the Joint List thinks that dissolving the Knesset and returning Netanyahu to power is for the benefit of the Arab community — bless their hearts.”

It seems the pressure put on the Joint List not to dissolve the government has also come from within the Arab community, from many activists and heads of Arab local authorities who call to build a strategy with Ra’am that would sustain the current government. A head of an Arab local authority in the north of Israel, who spoke with N12 on condition of anonymity, warned that without such a strategy, “we’ll get the racist chief inciter Netanyahu along with the two racists [Knesset member Bezalel] Smotrich and [Knesset member Itamar] Ben-Gvir.”

While many activists are pushing in that direction, there are also others less optimistic about the possibility of sustaining the current government. Social and political activist Saeb Mawasi said in conversation with Al-Monitor, “The government might survive for a few months and will manage to pass concrete decisions that aren’t extreme to one side or another, but a blow-up will ultimately occur because it will be hard for it to survive. As of now, the Joint List must provide a kind of security net and not rush to dissolve the Knesset until they see the way the wind blows.”

In contrast, Minister for Regional Cooperation Issawi Freij sounded optimistic in conversation with Al-Monitor, “In my estimation, they won’t have 61 votes to dissolve the government and the ball will pass to budget talks in the summer. That is where the government’s future will be decided. In the budget talks, members of the Joint List will have demands as a condition to pass the budget or provide a security net, which could help the government stay intact.”