The visit of Prime Minister Benjamin Netanyahu to Nazareth, with very little objection from local residents, reflected growing rejection within Israeli-Arabs of the Joint List party. 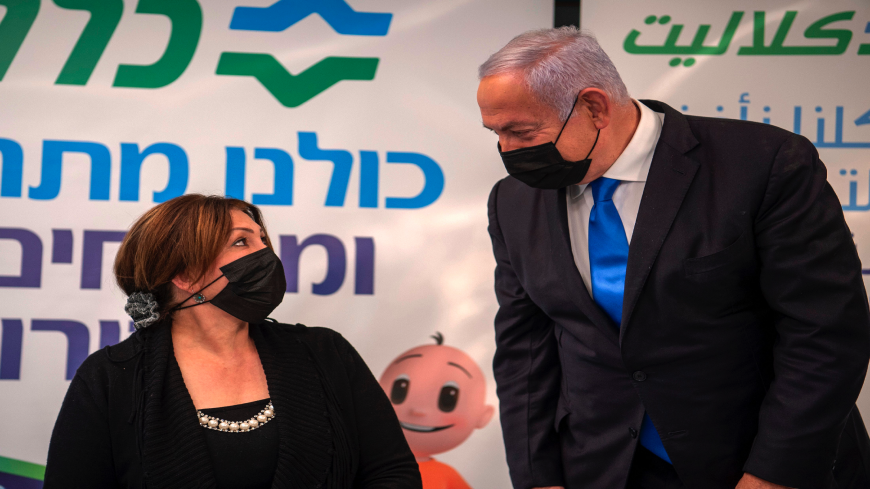 Israel's Prime Minister Benjamin Netanyahu speaks to an unidentified woman during his visit to the anti-coronavirus vaccination facility in the northern Israeli Arab city of Nazareth on January 13, 2021. - A group of Arab Israelis demonstrated against Netanyahu's visit to the fascililty in their city. Since July, thousands of Israelis have rallied each week to protest against the prime minister and the economic fallout from the pandemic. - GIL ELIYAHU/POOL/AFP via Getty Images

For years, Prime Minister Benjamin Netanyahu has done everything in his power to imprint in the public’s mind that Arab citizens of Israel must not be allowed to participate in the political game or determine the shape of Israel’s government. Things have certainly changed. Over the last few weeks, he has been touring Arab towns and villages, the very places that were not on his agenda as prime minister until as recently as a few weeks ago. And if those towns were on his agenda, it was usually to advance legislation detrimental to their residents (i.e., the Nationality Law, the Kamenitz Law or the Camera Law) or simply to incite against their residents. This offered him an opportunity to tell his own electorate that the future of his government was in danger because, Heaven help us, Arab voters might fulfill their democratic right to vote.

After starting his tour with a visit to the vaccination centers in the towns of Tira and Umm al-Fahm, Netanyahu paid a visit to the vaccination center in the country’s largest Arab city, Nazareth, Jan. 14. From there, he continued to City Hall for a meeting with Mayor Ali Salem. His visit was a celebratory occasion, with the mayor showering the prime minister with praise. On Jan. 17, the prime minister met with a delegation of Arab mayors and announced that “in the next few days" he would release a "huge program to fight violence and crime in the Arab sector, with significant funding backing it up.”

All of this raises the question: What prevented Netanyahu from releasing this plan earlier? After all, he has been prime minister since 2009, or, in other words, for over a decade. Why did he wait until now to fight crime and violence in Arab society, which has run rampant this entire time, claiming more and more victims? Why not put a stop to it earlier?

If we pause for a moment on his visit to Nazareth, we will find that while Netanyahu was delivering a speech to Arab society, promising “a new era’’ for Jews and Arabs, a protest against his visit to the city was taking place. Most of the protesters were political activists from the various Arab parties, including a few Knesset members from the predominantly Arab Joint List. The protest resulted in clashes between the police and demonstrators and, in the end, 12 arrests were made. Also, Knesset Member Sondos Saleh was taken to the hospital for what was thought to be a fractured hand.

At the same time, no one who followed the protest could ignore the basic fact that a city like Nazareth, home to almost 80,000 people, was unable to get more than a few dozen people or at most a few hundred to protest against the prime minister. Many of the protesters were also activists involved in the demonstrations on Balfour Street (Netanyahu’s official residence). What this seems to indicate is that the general population of Nazareth had no real interest in protesting against the prime minister’s visit, or at least not this time. And it could mean that Arabs are weary of the same old scenario in which the members of the Joint List call them out to demonstrate against just about any prominent politician representing Israel’s Jewish sector.

Mohamed Attieh — who once owned a business in Nazareth — is a high-tech entrepreneur from the Arab village of Yafia. He told Al-Monitor, “First and foremost, it is important for me to stress that I am not an enthusiastic supporter of Netanyahu’s visit. At the same time, the Arab population is fed up with all the protests and demonstrations by the Arab parties against visits by just about every Jewish politician to some Arab village or another. We are well aware of their reasoning too. The parties that make up the Joint List are afraid that they will lose Arab votes. They have no interest in their being an alternative address for the Arab community instead of their particular party. It doesn’t matter if we’re talking about Netanyahu, [Defense Minister Benny] Gantz, [former Prime Minister Ehud] Barak or [former Prime Minister Ehud] Olmert. They just want to keep the Arab community sealed off hermetically, at least when it comes to politics. I think this might explain why there was such poor attendance at the demonstration too. People are fed up with all the sloganeering and the repetitive cycle of demonstrations.”

Does poor attendance at the demonstration indicate that Netanyahu is gaining favorability in the Arab society? That would be hard to believe. On the other hand, there can be no doubt that a new wind is blowing among the Arab population, as seen in polls predicting that the Joint List will win 10-11 seats in total, compared with the current 15. Meanwhile, a source in the Joint List revealed that according to internal polling, the Likud will win 12% of the vote in the Arab society. This certainly boosts Netanyahu’s statement that he hopes to win two seats from the Arab voters.

Mohamed Kadan, a social activist from the Arab town of Baqa al-Gharbiyye, discussed Netanyahu’s strategy with Al-Monitor. “As an Arab citizen of Israel, the question of Netanyahu’s visit to Nazareth is complicated. On one hand, his attempt to appeal to Arab society offer Arabs an opportunity for representation and legitimacy, while shifting the discourse of hatred that he used against them in previous election campaigns. Back then, he incited incessantly against us. On the other hand, Netanyahu is a top rate politician, so it is difficult to tell whether he is exploiting Arab society or if he really wants to help it and weaken the Joint List along the way,” he said.

This may be the precise dilemma faced by Arab society. They are fed up with the same old discourse, but also with the private club that is the Joint List, set up to block anyone else in the Arab population from running for the Knesset. This created a vacuum in Arab society. Netanyahu is now trying to squeeze in and get as many votes as he can from it.

Another group trying to fill this vacuum is a new party named “Together Toward a New Era,” which is joining the race for the Arab vote and has already announced that it will join the coalition. Candidate Iman Gera Elmalek told Al-Monitor, “I call on the heads of the Arab local authorities not to fall into Netanyahu’s honeytrap, not to take part in his election campaign, and not to lend a hand to his cynical use of Arab society to win votes by making all sorts of promises that he has no plans to keep. Netanyahu promised to rein in crime in the Arab sector as far back as in 2012. But these are just promises intended to chip off votes and ensure that he remains in the Prime Minister’s Office.”