Prime Minister Benjamin Netanyahu is campaigning for Arab-Israeli votes — and some analysts say he may well find the support he needs for reelection. 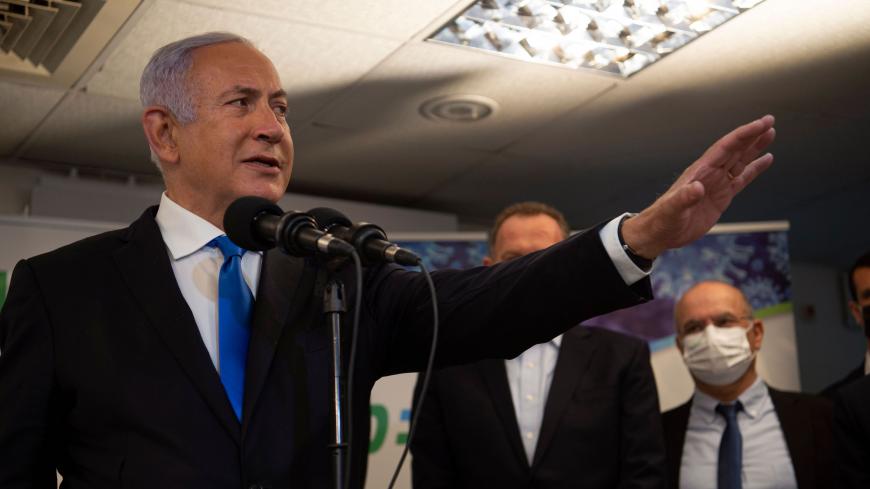 The photos from Nazareth of Prime Minister Benjamin Netanyahu standing alongside Mayor Ali Salem as he courted Arab voters Jan. 13 document a key moment in the 2021 elections.

As usual, Netanyahu hogged the agenda. He arrived with the full trappings of his high office in Israel’s largest Arab city, accompanied by a long convoy of cars and dozens of Shin Bet security agents. The highly unusual visit was carefully scripted in the best marketing tradition. Netanyahu’s “Nazareth speech,” as he dubbed it himself, was designed to signal a new era in his relationship with Israel's 21% Arab minority and create momentum for his fourth reelection bid in less than two years. His lines were at once cynical and historic. The man who repeatedly incited against the Arab population, questioned their loyalty to the state and warned about their electoral power was now standing before them asking for their support.

His speech was replete with promises of budgets and plans to eradicate the rampant crime plaguing Arab towns and villages, but it also included rhetoric about hope and co-existence. Simply put, Netanyahu had come courting with a barrage of hugs and kisses for Arab-Israeli society. “When I fight for the security of the state, standing alone to confront Iran, I am defending all the citizens of Israel without exception, Jews and Arabs, Muslims and Christians, Druze, Bedouin and Circassians. When I bring millions of vaccines, I save the lives of all the citizens of Israel, without exception.”

Salem was clearly awed. “No one has done what the prime minister has done,” he said. “We have never had it as good as we have now. If you had not dealt with the corona,” he said, turning to his guest, “I don’t know what we would have done. You look out for all the residents. And in the middle of this mess, you make peace, and peace is a good thing. I promise you we will support you so that you can continue giving.”

Knesset member Ahmad Tibi, head of the Joint List Knesset faction, wryly remarked, “Had Netanyahu been hooked up to a polygraph machine while making his Nazareth speech, it would have sizzled and burned.” He and his fellow Arab lawmakers were unsparing in their criticism and vowed to fight Netanyahu’s efforts to co-opt their voters.

Netanyahu’s Nazareth performance as he launched his campaign among the Arab public placed the Joint List on the defensive. Its legislators are being challenged to explain why they voted against the peace agreements Netanyahu has engineered with the Emirates and other Muslim and Arab states and show what they have done for their constituents.

The alliance of four Arab parties garnered 90% of the Arab vote in the September 2020 elections, an equivalent of 15 Knesset seats. Within a few short months, however, the chair of one of its parties, Knesset member Mansour Abbas of the Islamist Ra’am, stunned and dismayed his colleagues by urging cooperation with Netanyahu, sowing confusion and division within the alliance. Abbas, too, appears to have realized what Netanyahu did: Arab voters are disappointed with their elected representatives.

Just weeks ago, the sight of Netanyahu holding what was essentially an election rally at Nazareth's city hall would have been unimaginable. However, the prime minister never ceases to come up with creative ways to maintain power in Israel’s chaotic political arena, even as new parties keep popping up and vowing to boycott him.

It is too early to say whether Netanyahu can pick up two or three Knesset seats from Arab voters on March 23, but he has clearly presented the Joint List with the greatest challenge since its inception in late 2014. He correctly identified the disappointment of its constituents who realized that the unprecedented power they handed their lawmakers has been meaningless in terms of political influence and impact on their lives. Violent crime is ravaging entire Arab communities, as is the coronavirus, and to top it all, Netanyahu has pulled off historic peace and normalization agreements with Arab and Muslim states, refuting the paradigm of peace with the Arab world only following peace with the Palestinians.Arab-Israeli business people and tourists rushed to visit the Emirates, eager to pick the economic fruits of normalized relations even as their representatives in the Knesset, loyal to the Palestinian cause, voted against the agreements.

The moment marked the start of the decline in the Joint List’s polling numbers. Yousef Makladeh, director of the Satnet Institute and a leading pollster, assessed in a Jan. 14 interview on Israel Army Radio that the Joint List has dropped to fewer than 10 Knesset seats. He said that when he asked people why they were abandoning the Joint List, they said the alliance has produced no achievements.

The man with the uncanny ability to discern political trends and utilize them for his personal benefit clearly assessed the climate and sought to deepen Arab voters’ mistrust of their elected officials. Although his actions are undoubtedly cynical and driven by survival, the Arab Knesset members have no one to blame but themselves. They fell asleep at the watch and failed to appreciate the significance of the peace agreements for their voters, holding on to outdated precepts rather than understanding that the region is changing. In the midst of the global health crisis, Israel’s Arab citizens are proud of being among the first in the world to be vaccinated and Netanyahu played up their gratitude, visiting inoculation centers in the Arab towns of Tira and Umm al-Fahm.

Netanyahu, adept at reading polls, has realized that his reservoir of Jewish voters had dried up and decided to forage for Arab votes. Makladeh believes Netanyahu can pick up the two to three Knesset seats from Arab voters, enough to change the political map and hand him victory in March.