In the unlikely event that the Joint List splits up, many disappointed Arab voters would turn to Jewish parties rather than the coalition's Arab components. 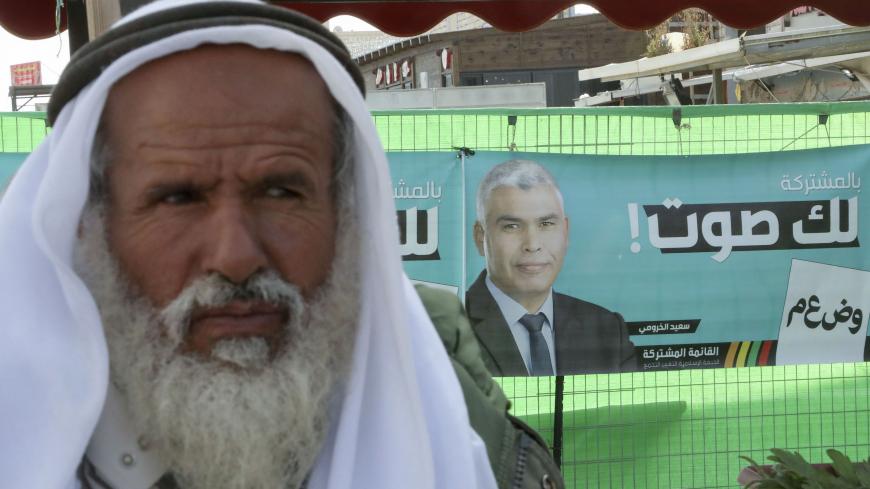 An elderly man from the Negev looks on after registering to vote at the village of Shaqib al-Salam, near the southern Israeli city of Beersheva, on March 1, 2020, in front of a campaign banner for Said Al-Khroumi, a Bedouin candidate for the Joint List. - HAZEM BADER/AFP via Getty Images

A recent poll by Statnet, a research and polling institute specializing in the Arab sector, asked what party Arabs would vote for if the Joint List split into its four constituent parties: Hadash, Ra’am, Balad and Ta’al. The results, which were released last week, had one particularly curious finding. They showed that 25.% of respondents would vote for a Jewish party rather than one of the Arab parties that make up the Joint List.

While the finding is, undoubtedly intriguing, it should come as no surprise to anyone who follows Arab society in Israel, especially the developments of the last few months, since the rotation government of Prime Minister Benjamin Netanyahu and Defense Minister Benny Gantz was formed — one that turned out to be all Netanyahu in everything but name.

The poll’s question was completely theoretical. It is fairly safe to assume that the Joint List will not break up into its constituent parties, if only because of the high electoral threshold of 3.25%. Talks are now taking place in the home of Mohammad Barakeh, chairman of the steering committee, to ensure that the parties run together again.

The unprecedented 15 seats that the Joint List won in March 2020 was mainly the result of high voter turnout (64.7%) in the Arab sector. It was the highest turnout since 1999, when it reached 75%. The sector voted almost unanimously in the Arab towns and villages. All told, almost 88% of Arabs voted for the Joint List. In other words, one of the great achievements of the Joint List was that only 12% of Arab voters supported Jewish parties.

For years, Arab parties found limited success in their efforts to dominate the Arab street. Then, Prime Minister Benjamin Netanyahu and the center-left parties came along. Netanyahu waged a longstanding campaign of incitement against the Arab population in the last three campaigns. His goal was to delegitimize the Arab vote and reduce Arab turnout. Meanwhile, the center-left parties played right into Netanyahu’s hands, distancing themselves from Arab society by refusing to include Christian or Muslim candidates in realistic positions on their party lists.

What changed this time? Yesh Atid Knesset member Gadeer Kamal-Mreeh, who announced that she would not run in the next election, told Al-Monitor, “It is important to see that a quarter of Israel’s Arab citizens are considering voting for Zionist parties. This is evidence of a genuine desire to participate in political and diplomatic activity as players wielding influence. More important, however, is the fact that this obligates the Zionist parties and their leader to engage in a real revision of their attitudes, agenda and vision. They must work toward the full and equal integration of Arab citizens of Israel and take real measures on their behalf.”

The truth is that there is more than one reason for this figure, including a desire among Arabs to integrate into the political game and wield influence, having realized that they cannot do so through the Joint List, no matter how many seats it wins. The situation is compounded by internecine fighting between the parties making up the Joint List, which is a private club of sorts whose doors are shut to certain sectors of the Arab community.

Furthermore, the Jewish parties have been courting Arab votes. Take Netanyahu’s visits to Tira, Umm al-Fahm and Nazareth, and the inclusion of Arab candidates in the various party lists. Examples include Ghaida Rinawie Zoabi and Esawi Frej in Meretz, Alean El-Krenawi in the new Economy Party headed by Yaron Zalika, and the Likud and Yesh Atid may well also include Arab candidates. As someone who lives and breathes polls, there is no way Netanyahu would miss an opportunity to scrape away votes when he sees signs that Arab society is ready. He even initiated meetings with the heads of local Arab councils to discussing reining in violence and crime in the Arab sector.

How do Arab analysts explain the surprising poll? Jamal Majadli, a former deputy mayor of Baqa al-Gharbiyye, explained to Al-Monitor, “Arab voters are very disappointed. They do not feel comfortable about the way the parties that make up the Joint List are squabbling. They haven’t done anything and they are fighting among themselves. It’s such a pity!”

Mohammad Khalaily, who lectures in civics and sociology at Oranim College, told Al-Monitor, “I am not surprised. When there was no Joint List, the percentage of Arabs voting for Jewish parties grew so that in the April 2019 election, it reached as high as 28%. All the recent studies show that there is a faction in Arab society that offers vocal support to voting for Jewish parties. It is important to remember that Arabs feel quite disappointed with the performance of the Joint List, especially when considering the promises made by its representatives to bring about change. They said that they would take part in forming a government to depose Netanyahu, and in the end, that did not happen.”