With so many parties splitting ahead of the March elections, even right-wing politicians are visiting Arab towns and villages in the hope of getting some votes there. 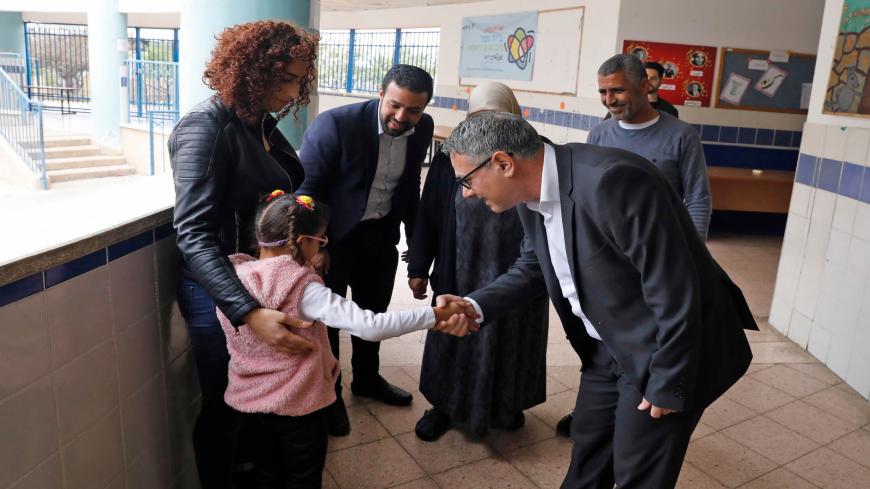 Mtanes Shehadeh (R), an Arab-Israeli politician from the Joint List political alliance, greets a family at a polling station in the Arab city of Tamra, Israel, March 2, 2020. - Ahmad Gharabli/AFP via Getty Images

In just a few weeks, on March 23, Israelis will be headed to the polls for their fourth election in two years. In the past, they looked condescendingly at countries like the United Kingdom, Spain and Italy that had a reputation for frequent elections, thinking to themselves that could never happen in Israel. But it did. Israel’s big political morass keeps on growing with no end in sight, and Israelis will pay yet another visit to the polling booth to see democracy in inaction.

One of the main features of the previous elections was a series of consolidations among political parties, particularly on the center-left. An example of this is the Blue and White list, which brought together three separate parties: Yesh Atid, Israel Resilience and Telem. The Arab Joint List brought together four separate Arab parties, and Labor teamed up with Gesher and Meretz to avoid wasting votes. What stands out in this election is the number of parties that split up into their constituent parts, with many deciding to go their separate ways. So, if it would have taken just three ballots to vote for all the aforementioned parties in the last election, it would take six ballots this time. It is the exact opposite of what happened in the previous elections.

The breakup of the Arab Joint List resulted in two separate parties. The first consists of Hadash, Balad and Ta’al, which decided to stick to the Joint List’s old format and platform. What makes this election different is the Ra’am party, headed by Knesset member Mansour Abbas, which decided to run independently with a promise of a new approach to issues of concern to its Arab electorate. It uses every available platform to announce its message — “We are neither left nor right. We work with everyone to advance issues pertaining to the Arab society.” As of now, most polls show that the new party has not garnered enough support among the Arab electorate to gamble on Abbas. Only one poll, conducted by Channel 13, has Ra’am passing the electoral threshold with four seats, the barest minimum needed to enter the Knesset.

A common explanation is the methodology used by pollsters. Telephone polling is thought to offer a more accurate reflection of the Arab vote than online polls, because it is difficult to sample the elderly population and the Bedouins of the Negev through the internet.

As of now, most polls give the current iteration of the Joint List eight seats, a disappointing outcome considering that it is an amalgamation of three parties. On the other hand, over the last few weeks, there seems to have been a rise in the anticipated number of Arab voters — it already stands at 57% to 58% according to the most recent Channel 13 poll. This trend, if it continues, should have an impact on the number of seats it eventually wins. This is also compounded by the clashes with the police in Umm al-Fahm last weekend. The incident could be a turning point for the Arab public, increasing voter turnout.

Nevertheless, it seems as if the fourth election in two years — held in the shadow of the coronavirus and economic crises, with so many voters losing their jobs — could find an electorate caught in sheer desperation. As a result, more than a few politicians have sought out new voters, often in places they avoided in the past.

The classic example of this is the way that Jewish parties, especially on the right, have started courting Arab voters. In past elections, Jewish parties conspicuously avoided including Arab candidates on their lists, leaving the Joint List to address Arab concerns. This time, Jewish parties are adopting a new strategy of competing with the Arab parties for votes in the Arab sector. The results border on the absurd. Knesset member Ayelet Shaked of the right-wing Yamina party decided to pay a visit to the Arab towns of Kafr Bara and Taibeh, while Minister Miri Regev proclaimed, “The Likud is the home of the Arab public.” Prime Minister Benjamin Netanyahu is constantly touring Arab towns and villages, claiming that he expects them to give him 2-3 seats, while Knesset member Eli Avidar of Yisrael Beitenu has been appealing to the Arab population in Arabic in a series of election videos.

Avidar, who was born in Alexandria, Egypt, and is fluent in Arabic, told Al-Monitor, “What I am doing with Arab society stems from the fact that ever since I entered the Knesset, it has been important to me to engage the Arab society in dialogue. I did this in the past as well, while serving as chairman of the Forum for a Smart Middle East, whose entire idea was to promote dialogue between the two populations. I visit the many Arab towns and make video clips that get posted online. I was in Nazareth after Netanyahu’s visit there, and explained to the residents that they must not cooperate with him after all his incitement against them. I also visited Sakhnin to tell the people there not to vote for Ra’am, because that whole party is the result of a deal that Netanyahu made with Mansour Abbas. I did that fully aware that I won’t get a single vote there. Nevertheless, it is important for me to tell the Arab community that there are Knesset members on the right who really do want to talk to them. I do the same thing in Arabic that I do in Hebrew.’’

What does the Arab electorate think about the way these politicians are courting them? Safaa Jabareen of Umm al-Fahm told Al-Monitor, “I think it shows a kind of bankruptcy, as a result of what happened in the Arab parties, which caused Arabs to look to the Jewish parties. The idea of Netanyahu courting them is not something that should be taken for granted. It looks more like a 'what do I have to lose tactic.' If it succeeds in winning 5% of voters this time, next time it could be more.”

Fadi Maqlada, a law student from Daliat al-Carmel, told Al-Monitor, “The very fact that they are thinking about the Arab public is a positive step forward, but in the end it needs to be backed up with deeds and not just promises. When they say, 'The Likud is the home of the Arab public,' there needs to be some kind of practical implications to the statement. Nevertheless, it is encouraging to see a shift in the dialogue. If, in the past, the political and media discourse surrounding Arab citizens focused on their legitimacy, today it is about the problems facing Arab citizens.”