A group of bereaved Israeli-Arab mothers has decided to combat the worrisome phenomenon of increasing crime, violence and police inefficiency. 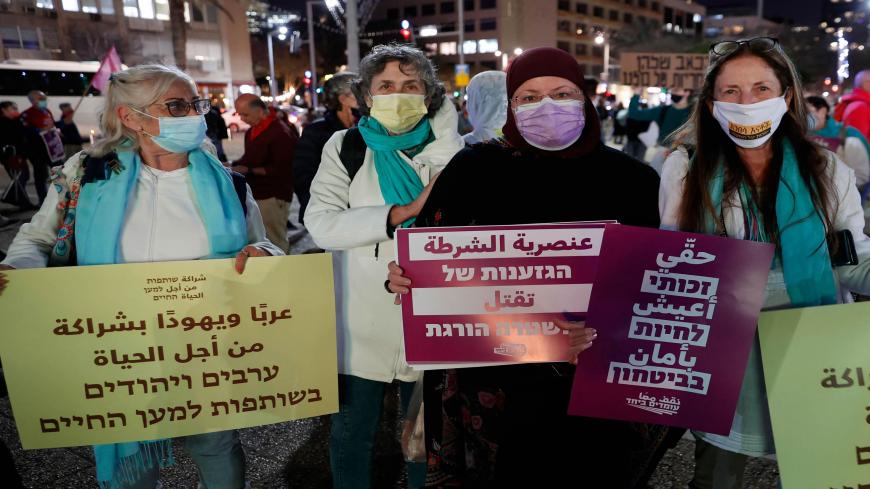 Israelis and Arab-Israelis take part in a march to honor those killed in organized crime and call on the police to curb the wave of intra-community violence, Tel Aviv, Israel, March 18, 2021. - Jack Guez/AFP via Getty Images

Israel goes to the polls tomorrow for the fourth time in two years. Meanwhile, the violence that continues to plague the Arab society could hold the key to the outcome.

In this March 23 election, the Arab Ra’am faction led by Mansour Abbas will be running independently of the Arab Joint List. Ra’am has already declared its intent to establish a new paradigm for Arab politicians in Israel: “Not only will we pass the electoral threshold. We will become a major political force.” What they are really saying is that in order to rein in violence and crime in the Arab society, it is important to become part of the executive branch of government, and not just the legislative and judicial branches.

They aren’t the only ones that believe this either. One group, Mothers for Life, has decided not to wait for the election to speak out against the wave of violent crime that has overwhelmed Arab society for years. The group, founded by a group of bereaved mothers, has decided to combat this worrisome phenomenon by calling on all families that have lost loved ones to violence to break their silence and raise their voices against it. Last August, during the hottest days of summer, and while the coronavirus was ravaging the country, these mothers and their allies decided to march from Haifa all the way to President Reuven Rivlin’s residence in Jerusalem.

Over the past few years, there have been a fair share of fiery speeches and scathing condemnation of violence in the Arab public coming from the prime minister, Cabinet, Knesset members and mayors. In fact, who hasn’t spoken up about it? On the other hand, just about everyone knows that very little has actually been done to get this pandemic of violence under control. Despite all the rhetoric, it continues to take its toll on the country’s Arab population.

Mothers for Life is part of a genuine effort to push back and rein in the violence. As such, it should not be taken for granted. These bereaved women, who lost family members to murder, are speaking out openly and fearlessly against the organized crime families that impose a reign of terror on Arab towns and villages. Until now, few people have dared even to have this conversation, if only out of fear of the consequences.

That all changed over the last few months. These women have decided to take up the struggle against violence themselves, noting that they have “nothing left to lose.” Their struggle involves a number of strategies, starting with interviews and opinion pieces in the Israeli press.

One newspaper, Yedioth Ahronoth, rose to the challenge by making them the subject of a frontpage story in Hebrew and Arabic in the weekend supplement. The headline read, "Only Together.” The group has also organized protests against violence in Arab towns and villages and a mass demonstration in Tel Aviv’s Rabin Square March 18 against the violence itself and the failure of the police to get it under control.

The purpose of all these activities is to win the support of the Jewish public for their cause by relaying the message that their struggle is an Israeli struggle that affects the entire country. Over 1,000 Jews and Arabs participated in the demonstration. Speakers included representatives of Mothers for Life, Jewish and Arab politicians from a number of different parties, and rapper Tamer Nafar, who performed a song protesting the violence plaguing the Arab community. The model for these women is the Four Mothers movement, which was able to get Israel to withdraw in 2000 from southern Lebanon. This new generation of mothers is hoping to end violence in the Arab society.

One of the speakers at the demonstration was Siham Egbariya from the Arab city of Umm al-Fahm, whose husband and two children were murdered in 2011. Prime Minister Benjamin Netanyahu met with her during a conference on crime and violence in the Arab society, hosted by the Knesset. During his most recent visit to Nazareth Jan. 13, he mentioned her along with the murder of her husband and children.

Egbariya told Al-Monitor, “I lost my husband and two children. They were shot dead right in front of us in our home, and yet there have been no arrests so far. In 2012, I participated in a Knesset hearing. I felt optimistic when the prime minister turned to me and promised that the case would be handled, and that they would find the murderers, but nothing actually came of that. When I saw that no progress was being made, I asked the district police in Haifa about where the investigation stood. One police investigator told me, ‘I can tell you who came into your house and shot your husband and children, but we need evidence.’ I refused to accept his response. I didn’t want to know who shot them, because I am sure that if I was Jewish, they would have found the murderer and arrested him in a matter of 24 hours."

Egbariya said she spoke at the demonstration because “I wanted my voice and my pain to be heard in Jewish society as well, because I feel that the Hebrew-language media has shown a certain degree of apathy toward our pain. That is why I want to tell the Jewish citizens of this country that the bare minimum that we deserve is a chance to live in safety. I don’t intend to stop either, even if I have to go all the way to the United Nations in the United States. Our voice must be heard everywhere.”

When asked whether she feels that the Arab members of Knesset are helpful in their struggle, she responded, “In my opinion, there’s not much they can do, and besides, for the most part, all they care about is taking credit. Ever since I took part in the Knesset debate organized by Ahmad Tibi in 2012, I haven’t heard a word from him. He hasn’t made contact with me.”

Ran Wahle from Ramat Gan told Al-Monitor why he felt that it was his responsibility as a Jew to attend the demonstration. “It hurts whenever someone is murdered, but somehow, when an Arab is murdered, it doesn’t get the same attention in the news, even though violence in the Arab sector could just as easily reach my house. I decided to participate in the demonstration because these are citizens, just like me, so it is my problem too,” he said.

Chairman of the Joint List Ayman Odeh, who also addressed the demonstrators, told Al-Monitor, “Hundreds of Jewish and Arab demonstrators prove that violence and crime may affect the country’s Arab citizens, but the struggle against the phenomenon is a common struggle for all of us. These brave, bereaved mothers, with whom I marched to the home of the president last August, are fighting first and foremost for equality: equality in education, in welfare and also in law enforcement. Only real and deep equality will ensure a reality in which young men and women will be able to envision a future without organized crime — a future without funerals for 15-year-olds.”