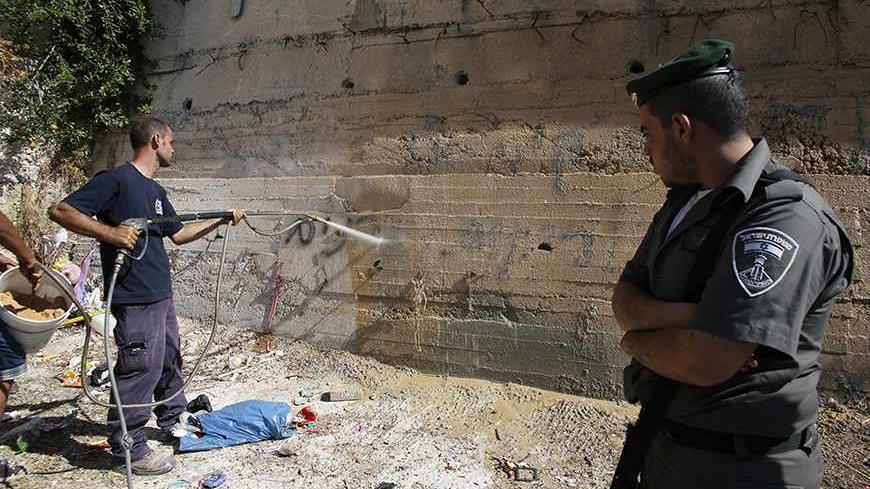 A Israeli border police officer looks as a municipality worker washes off graffiti sprayed on a wall in the Arab neighborhood of Beit Hanina in east Jerusalem, June 24, 2013. - REUTERS/Ammar Awad

Two major criminal cases were exposed in the media in Israel this week. Both of them involved popular singers: one Arab, and the other Jewish. The Jewish star, whose name has not yet been released for publication, has been linked to parties at which there was sex with minors. The media has covered every tiny detail of the police investigation as soon as it was released for publication. The latest details featured in the headlines of every newspaper, as well as on TV and radio news shows. After a special police team spent months secretly collecting evidence and testimony, news surrounding the “well-known singer affair” has become the main topic of discussion everywhere.

The second incident involves Israeli Arab singer Shafik Kabha, who has long been one of the most popular artists within the Israeli Arab sector and the territories. Kabha was shot dead three weeks ago, on Oct. 22 at the entrance to the town of Umm al-Fahm by a suspect riding a motorcycle. The murder sent shock waves throughout the Israeli Arab community, not only because Kabha was a much-admired performer for more than three decades, but also because of the intolerable ease with which a man was murdered, even though he was not involved in any criminal activity. In fact, he had just finished performing at a wedding. More than 10,000 people showed up for his funeral. Thousands also demonstrated in the victim’s village of Kafr Qara, demanding that the police take bold action to identify the murderers.

All this drama barely received any national coverage in Israel. It was as if the killing took place in some other country. The vast majority of Jewish Israelis have no idea who Shafik Kabha was, and besides, the murder of an Arab citizen in broad daylight isn’t considered newsworthy by the Israeli media. It barely merits a sentence and a half on the news, if that, and obviously no one keeps tabs on any ongoing investigations. To all too many people in Israel, the country’s Arab population has become invisible. The murder of Shafik Kabha was only mentioned in a sidebar in the press after the police arrested three suspects in the crime and revealed the motive: It was alleged that Kabha was shot dead because he refused to perform at a wedding involving the family of one of the suspects.

Murders have become a common occurrence in the Arab sector. At Haifa University, a multiyear study conducted by Arye Rattner, director of the Center for the Study of Crime, Law, and Society, and Gideon Fishman examined violence in Israeli society from 1980 to 2007. The research findings indicated that the number of criminals who committed violent and extremely violent crimes in the Arab sector was significantly higher proportionally than the number of Arabs in the general population, in some cases double or even triple their ratio in the general population.

Furthermore, data provided by the Israeli police show that 79% of shooting incidents in Israel occur in the Arab sector. The cause is obviously the amount of guns and ammunition that circulate throughout the Arab towns and villages.

The residents of Shafik Kabha’s village of Kafr Qara sent a petition and open letter to Prime Minister Benjamin Netanyahu, stating: “While the spotlights are focused on the center of the country, highlighting the rampant violence on the streets of Tel Aviv and other cities in the center, and usually conclude with praise for the Lahav Unit and ‘Mr. Center-of-the-Country,’ the murders in our sector are almost all unsolved. … Unfortunately, the situation today is that anyone who has a gun or who breaks the law is considered strong and all-powerful. He can take a person’s life without paying for it. Sadly, this could serve as an example for the younger generation.''

Another example of the feeling that the Israeli police and the authorities are hardly doing anything is the story of Siham Aghrbayia of Umm al-Fahm, whose husband and two children were shot dead two years ago. After the murder, Aghrbayia participated in a Knesset discussion titled "Civilian Terrorism in Arab Society." Netanyahu turned to her and said, “Our hearts are broken” by what happened, and he promised to help her. A year has passed since then, and Aghrbayia said the prime minister has failed to keep his promise. Nothing was done. The man who killed her husband and two children is still at large.

These murders raise the question as to why the Israeli authorities are not taking any steps to combat the arming of the Arab population. It is a question that has been asked before, but in light of recent events, it is asked with even greater urgency. Israel’s police force is charged with ensuring the safety of the country’s Arab residents, just as it is charged with ensuring the safety of Israel’s Jewish residents. Why, then, is it doing nothing, especially given the stark statistics, which it knows so well? No one has declared a war on crime in the Arab sector. There are no emergency briefings at police headquarters, and the topic isn’t debated by the Cabinet. No one in the Israeli establishment has even demanded that the phenomenon be reined in or that an effort be made to round up the guns that are so prevalent in the Arab sector.

Representatives of Israeli Arabs claim that the police have adopted a policy of ignoring the problem over the past few years, despite frequent calls by mayors and local council heads, and even by Knesset members, that they do something about it. An Arab mayor I spoke with, who requested to remain anonymous, told me that there isn’t a single home in all the Arab towns and villages which doesn’t have at least one gun.

Gang warfare and a string of murders in the Arab sector parallel the rise of organized crime in Israel and a series of mob hits that have taken place in the light of day throughout Israel’s major cities.

But while the police invest vast resources in combating organized crime and improving the sense of personal safety among the residents of the major cities in the center of the country, no such effort is being made to resolve these problems among the Arab population.

There are two main reasons why the policing of the Arab sector has suffered such neglect. The first is the sparse coverage it receives in the Israeli media, which assume that the Jewish public has no interest in the affairs of the Arab public. As far as most Israelis are concerned, crime within the Israeli Arab sector is almost synonymous with foreign affairs.

The second reason is more complex. Ever since the bloody riots of October 2000 in which the police killed 13 Arab demonstrators, there has been a severe breach of trust between the country’s Arab citizens and the Israeli establishment in general, but particularly with the Israeli police. The lack of trust between the two sides has resulted in a decline in the number of Arab youths who enlist in the police force. Furthermore, policemen who show up in Arab localities to conduct routine police work often encounter violent opposition from the local residents.

The only way to handle this problem is to restore trust between the Israeli police and the Arab public. A series of meetings must be held between the relevant parties, with the support and encouragement of Arab mayors and council heads. A reconciliation coupled with an information campaign must be launched, and the police must make it crystal clear that they consider the task of protecting the country’s Arab citizens to be of equal importance to its responsibilities toward the country’s other sectors. Only then will it be possible to speak seriously about reining in crime, collecting the stockpiles of weapons, and going after organized crime in the Arab sector.