In an interview with Al-Monitor, Knesset member Issawi Frej deplores the increase of weapons within Israeli Arab society and criticizes Israeli policy for not dealing with the phenomenon. 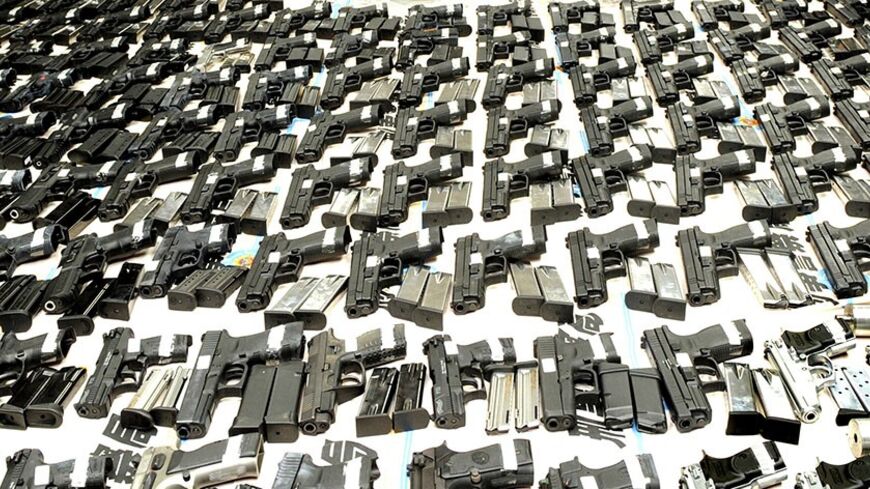 The increase in gun violence has become serious over the past few months, said Issawi Frej, a Knesset member of the Meretz Party and resident of the northern town of Kfar Qasim, an Israeli Arab city. - REUTERS

The date: Saturday evening, Jan. 25. The time: approximately 8 p.m. A phone call to the emergency center reports briefly on an 8-year-old girl with a head injury. A paramedic at the medical center in the Israeli-Arab town Umm al-Fahm is alerted and he rushes to the home in the village of Muawiya in the Wadi Ara region. When he gets there, he finds a girl sprawled on the grass with a severe head wound. A family member tells him that she was hit by a stray bullet. The medic tries to stop the bleeding and has her evacuated to Rambam Hospital in Haifa. She is in critical condition.

This was just one event out of many that is the direct result of the hoarding and illegal use of weapons among Israeli Arabs. Issawi Frej, Knesset member of the Meretz Party and resident of the northern town of Kfar Qasim, described it like this: “If you don’t have a gun, you don’t exist.” In an interview with Al-Monitor, he said that the situation has become so serious that over the past few months, educated young couples in Arab localities are considering raising one of their sons to be a “thug” so that he can protect his brothers and sisters. “If you don’t have a thug,” he said, “you could be humiliated.”

Al-Monitor asked Frej if he wasn't, perhaps, exaggerating. He replied, “I’ll give you a personal example. I have one son, and my wife is pressuring me to have another male child. I’m talking about myself, because my brother has three sons, and he really plans for one of his sons to become a thug. No giving up. Protect his siblings. That’s the situation."

Another victim of a stray bullet died this week, the casualty of a gang war in the Arab sector. Fadi Aasi, 40, had been critically wounded three months ago by shots fired by criminals in the village of Kafr Bara, near Kfar Qasim. Aasi was the father of three.

The increase in illegal weapons in the Arab sector not only results in the wounding and death of innocent passersby. It also leads to a rise in armed crimes committed by people who are trigger-happy. In Tayibe, for example, a turf war between the various gangs has been going on for the past year. One of the families intimidating the other residents of the village is the Abdel Kader family. That family has had a shootout with Israeli police in the past. Today, residents who live near the family compound are forced to leave their homes whenever tensions escalate so as not to be caught in the crossfire.

According to figures from the northern district of the Israel police, in 2013, 400 suspects were arrested for possession of weapons. Over the past two years, the Israel police seized a total of 2,000 guns and collected an additional 200 illegal weapons, which were handed over willingly by their owners. Workshops to manufacture makeshift weapons were also discovered.

Nihad Ali of Haifa University investigated and found that while there has been a drop in the crime rate in the Jewish sector — despite the escalation of fighting between the various criminal organizations — in the Arab sector there has been an increase in all types of violence. According to police statistics, the number of criminal acts in Israel decreased by 5% in 2013, while the trend is different in the Arab sector: 40% of all murders committed in Israel and 36% of all attempted murders were perpetrated by Arabs, even though they constituted just 17% of the total population. According to the same data, no less than 9,000 shooting incidents took place in the Arab sector.

Frej added that children in the Arab sector sometimes come to school with guns, which have become a status symbol that improves their standing. “There’s a phenomenon where six or seven kids take a thousand shekels each, pool their money, do a round among all the gun dealers, and buy a weapon together. It’s intolerable,” he said. “Kfar Qasim has become Israel’s backyard. Lod and Ramle are slowly getting cleaned up, and the phenomenon is shifting to Kfar Qasim and Tira.”

Makeshift weapons are being manufactured in workshops in Arab villages or the occupied territories. Other weapons were stolen from Israel Defense Force bases or smuggled into the country from the Sinai Peninsula. But the important question isn’t where the enormous amounts of weapons are coming from, but why it is so easy to obtain one and keep it at home, regardless of whether it is a makeshift pistol or a fully automatic weapon.

In February 2010, the Knesset’s Information and Research Center produced a position paper that investigated the causes and scope of the phenomenon. The study listed what it called the “in-depth factors” that result in the intensification of violence in Israeli Arab society and the desire for firepower. The first factor is the breakdown of the clan structure, with the weakening of traditional authority serving as an opportunity for violence and crime. The second factor is the sense of alienation from the larger Israeli society. The third factor is the process of formulating a distinct identity, which Arab society in Israel is undergoing.

Frej agrees with this analysis, but emphasizes that it is the absence of law enforcement that is one of the main contributors to this phenomenon: “If the rule of law was more forceful and the police acted the way they should, without trepidation, things would look different,” he said. “If the guns were aimed at Jews, we wouldn’t be seeing this. Since these are criminal weapons intended to show that ‘I exist,’ almost no one lifts a finger to combat the phenomenon.”

Over the years, there has been distrust between the Israel police and the Arab sector, but this only escalated since the events of October 2000, in which 13 Israeli Arabs were killed by shots fired by the Israel police and the border police. The Or Commission, an official commission of inquiry charged with investigating the incident, spent three years debating the issues, but still failed to repair the rift. If anything, it only exacerbated it. Since then, Israeli police in Arab towns and villages are considered to be an unwanted presence. Every police patrol in these regions is a loaded event, surrounded by considerable tension. For the Arab residents of the State of Israel, the police represent an oppressive force, which discriminates against them as compared with the Jewish residents.

The arrest of an Israeli Arab resident in an Arab village or town, even when it is a criminal arrest, can sometimes meet with resistance from the local residents. To many people, police activity is not perceived as the fulfillment of their responsibility to maintain public order, but as a means of violent retaliation. The significant reduction of a police presence in these localities removed one of the obstacles which should have blocked the spread of illegal weapons.

Nader Hamdan, a resident of Tayibe, told Al-Monitor that even residents with no ties whatsoever to criminal activity are interested in having a gun to protect themselves. “It has to start with police enforcement first of all,” Hamdan said. “More and more Israeli Arab residents realize that the presence of the Israel police is essential for their personal safety.”

But to do that, trust must first be restored between Israeli Arabs and the Israel police. For that to occur, Arab citizens must accept a uniformed presence in the Arab sector and the Israeli police must alter their ways. The police must change their attitudes and methods when dealing with Israeli Arabs, and act toward them with the same sensitivity and respect shown toward the Jewish citizens of the state.