Is Israel at fault for surging Arab crime?

Israeli security forces invest time and effort to track weapon factories in the West Bank but neglect to deal in depth with illegal weapons of Israeli Arabs. 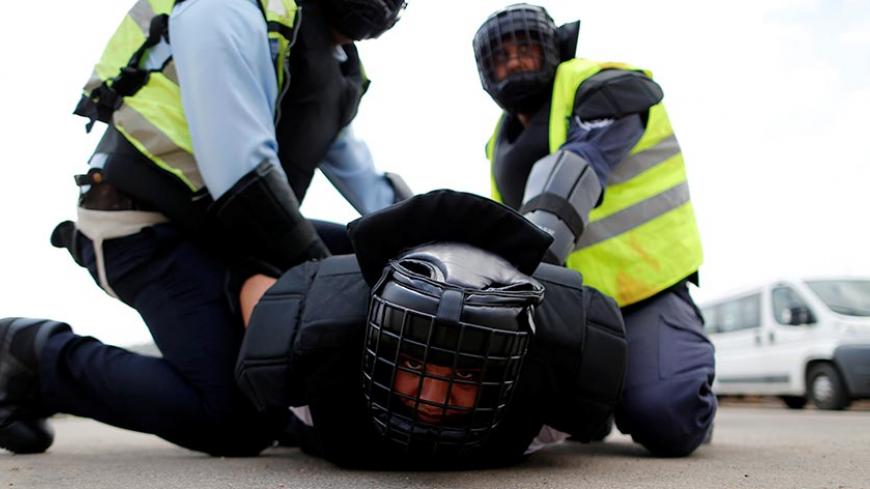 Arab Israeli police recruits detain a colleague during a simulation as part of a training exercise at an Israeli police academy center in Beit Shemesh, Israel, Aug. 24, 2016. - REUTERS/Ammar Awad

Israel’s Arab sector has undergone another week of carnage. On Aug. 23, Amna Yasin from Tamra, who was nine months pregnant, was stabbed to death. Reportedly, her husband is the prime suspect. The next day, a 24-year-old woman was shot by an unknown person in Shefar’am, and severely wounded as a result. Additional shooting incidents were recorded later on in the week in Jaffa, Jaljulia and Kafr Makar, where a security camera documented an attempted murder by automatic weapons.

Data published by the Aman Center - the Arab Center for Safe Society in Israel in May shows that 20 members of the Arab sector were slain in the first four months of the year in incidents involving firearms; three of the victims were women. There have more deaths since. According to data collected by the Aman Center, 1,182 people have been killed since 2000 and more than 3,300 have been wounded in shooting episodes within Arab localities.

Roni Alsheich, the inspector general of the Israeli police, said that 59% of murders in Israel in 2015 took place in the Arab sector, even though the sector's residents only constitute 21% of the population.

Haaretz newspaper reported that according to the members of the Higher Arab Monitoring Committee, Arab localities endure a Wild West reality, saying that the Arab-Israeli society in its entirety is on a “slippery slope to internal collapse.” They blame law enforcement authorities, headed by the police, for powerlessness vis-a-vis a shocking phenomenon: that a reported one in three households in the sector have illegal firearms.

“Arabs are killing Arabs, and this isn’t a story that sets off alarm bells or worries law-enforcement authorities like a murder in the Jewish sector,” Arab Knesset member Issawi Frej (Meretz Party), a resident of Kafr Qasim, told Al-Monitor. According to Frej, when an Arab is suspected of murdering a Jew, the murderer is apprehended within a short time period. But when Arabs murder other Arabs, far fewer cases are solved. “Arab society is a closed society and usually the residents know who the murderer is — and even talk about it among themselves. Everyone knows who the murderer is, except for the police,” he said.

This week, the Israel Defense Forces (IDF) conducted a sweeping operation to uncover workshops for weapons production and military equipment in the West Bank, and to confiscate illegal weapons. The operation was conducted in the Hebron and Bethlehem areas: five battalions were involved that confiscated 54 guns and uncovered 22 lathes. Many of the guns confiscated were "Carlo" rifles (a simplified version of the Carl Gustav rifle), which are manufactured in the territories and are very prevalent in Arab localities in Israel. The number of firearms that were confiscated in the IDF operation was an object of ridicule in the Arab sector; there were those who argued — perhaps with certain exaggeration — that such a number can be easily found in almost every Israeli-Arab household.

“The Israeli-Arab political leadership has long since warned the police that the improvised Carlo gun can be purchased for only a few thousand shekels. They said that something must be done to uncover the weapons workshops in the territories that threaten our society, but no one has expressed any interest,” Frej said.

According to Frej, Israel only woke up and began to conduct raids on weapons factories when improvised firearms started being used in terror attacks. “All these weapons factories were an open secret to everyone in the [Arab] sector, but no one went to close them down (before the terror attacks) and nothing was done to avert the next murder in our sector. Why?” he asked.

After a resident of the Israeli-Arab village of Arara committed a terror attack in Tel Aviv's Dizengoff street Jan. 1, Prime Minister Benjamin Netanyahu paid a visit to the scene of the attack and declared that he would not accept two states in Israel — a law-abiding state for most of its citizens and a separate lawless enclave. Despite the accusations directed by Netanyahu at the entire Arab sector, the members of the Higher Arab Monitoring Committee had hoped that law enforcement authorities would wake up and conduct operations to put an end to the illegal weapons phenomenon in the Israeli-Arab sector. But, they claimed, the authorities limited themselves to several local raids.

Reda Jabar, an attorney who is the director of the Aman Center, told Al-Monitor that the rising violence in Arab society should be viewed in a broader perspective. “We have internal violence that the state is connected to in a major way,” he said. Jabar said the violence erupted due to governmental neglect in maintaining public order in the Arab localities, a shortage of police, nonenforcement of the law, housing shortages, severe poverty and a deficient educational system, and unemployment, among other issues. He argued that these social phenomena increased greatly in recent years, causing internal unbridled violence.

Jabar rejects the argument that the violence should also be attributed to the violent character of Arab society, in which men who murder their wives are treated leniently. “That isn’t true,” he said. “There is great public opposition to the murder of women and a heightened [public] awareness of the issue. The result is a drop in the number of [Israeli-Arab] women who were murdered, when compared with previous years.”

Frej, too, rejects the argument that violence in Arab society stems from cultural elements. “Violence is not genetic,” he said, using the Palestinian Authority (PA) as an example. He said that although “Palestinian society in the West Bank is less affluent than us, less educated,” fewer people are murdered there than in the Israeli Arab sector. “How come?” he asked. “We’re talking about the same Arabs.”

According to Frej, the answer lies in the lack of enforcement of the Israeli establishment with regard to Arab localities.

“Netanyahu said that he will not allow the existence of a [lawless] state within a state,” Frej concluded. “But it does in fact exist and no one is doing anything to change this bleak state of affairs.”