The great majority of Israeli Arabs condemns and rejects terror acts, such as the shooting on Friday at a Tel Aviv pub, but this does not prevent Prime Minister Benjamin Netanyahu from blaming them all. 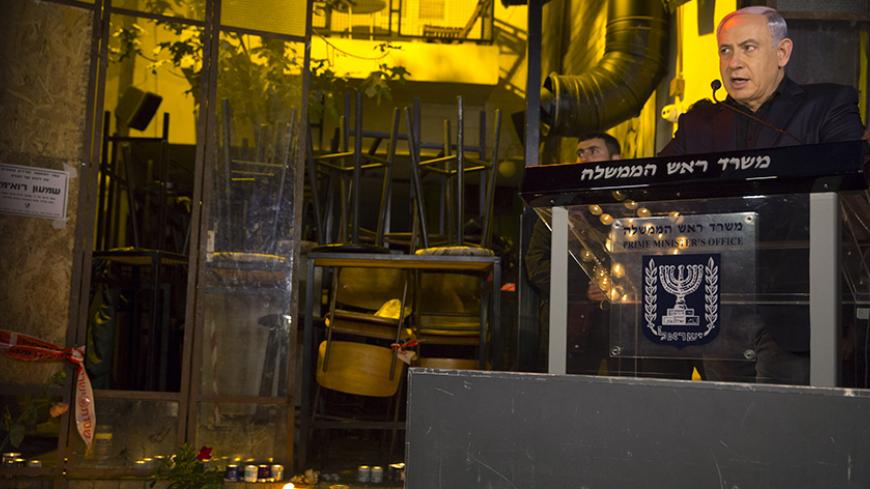 Israeli Prime Minister Benjamin Netanyahu delivers a statement to the media during a visit to the scene of a shooting incident in Tel Aviv, Israel, Jan. 2, 2016. - REUTERS/Heidi Levine

Israel’s Arab citizens had been hoping that the country’s Jewish population would not rush to blame their entire sector for the attack on Dizengoff Street in Tel Aviv Jan. 1, by saying that all Arabs supported this murder and terrorism. That was what they had hoped, at least, until Prime Minister Benjamin Netanyahu appeared on Jan. 2 at the scene of the incident, which left two dead and seven injured.

Soon after it was reported that the terrorist behind the attack was Neshat Melhem, a resident of the Arab village of Arara in Wadi Ara, northern Israel, Al-Monitor spoke with residents of his village and with people who knew him from the nearby town of Umm al-Fahm. They all tried to dispel efforts by what they called “irresponsible politicians” to use the murders to incite Israeli Jews against the Arab population. They had hoped that the very fact that it was Melhem’s father who called the police of his own accord to identify the murderer as his son, or the claim that Melhem had a history of mental illness and violence against his own family, would convince Israelis that he acted alone and on behalf of no one but himself.

Akl Khader, the principal of the school in Wadi Ara that the shooter attended, told Al-Monitor that the Melhem family is an "ordinary" Arab family and that the father is an exemplary figure in the village, who volunteers with the community police force. “Even if his son was responsible for this horrible act, there is still no reason to blame the family and certainly not the village or the entire Arab population of Israel for what happened,” Khader said.

When journalists showed up at the Melhem family’s doorstep, the father told them, “I did not teach my son to act that way, and I am sorry for what he did. When I heard about what happened, I went straight to the police and helped all of the security forces from every possible angle.” According to the suspected assailant’s father, he also appealed to acquaintances in the neighboring villages to help the security forces catch his son before he kills again.

Meanwhile, Melhem’s brother Juadat was arrested on suspicion of involvement in the attack, but no details have been released yet about how he is allegedly linked to the incident.

A resident of the village told Al-Monitor on condition of anonymity, “We don’t blame the Jews for the murder of the Dawabsha family [whose home in the village of Douma was set on fire on July 31, 2015] or other incidents worthy of condemnation, so there is no reason to blame all of us for the acts of this particular individual.” But then Netanyahu arrived at the scene, and the one thing that they feared most of all became their dreaded reality.

“I am not willing for there to be two states in Israel — a state of law for most citizens and a state within a state with Islamist incitement and illegal arms that are often used in weddings, celebrations and criminal incidents,” Netanyahu said. With that, the prime minister labeled the entire Arab sector as dangerous and inciting. What he forgot to mention was that the Arabs themselves have been warning for years that too many weapons are hoarded within their communities, and that they have been begging the state to do something about the problem. They are suffering from crime-related murders almost on a daily basis, but until the violence struck in Tel Aviv, the problem had been ignored. No one has reacted or offered a solution yet.

Knesset member Issawi Frej of the Meretz Party, who resides in Kfar Kassem, said as much in an interview with Al-Monitor in January 2014: “If you don’t have a gun, you don’t exist.” He said that many Israeli Arabs are arming themselves essentially because of the predominant sense of decline in their personal security, due to the fact that the Israeli police do not enforce the law in their towns and villages. For years, the heads of Arab municipalities pleaded with the police and the Knesset to do something to address the problem, but so far nothing has come of it. Local residents, who have suffered from crime and violence, claim that the Israeli police consider it less urgent when Arabs kill each other, so they are slower to respond.

In a discussion that took place in the Knesset on Nov. 17, 2014, the heads of the Arab local councils warned about the proliferation of weapons in the Arab sector. Mazen Ghnaim, the mayor of Sakhnin, who also serves as deputy head of the High Follow-up Committee for Arab Citizens of Israel, said at the meeting, “Violence is a cancer. … We all want to do our part to eradicate the problem of illegal weapons.” Knesset member Masud Ghnaim of the Joint List of predominantly Arab parties said, “There is a rift with the Arab public, because we are still treated as a security threat. But if the police were to show determination and adopt a serious attitude toward resolving these problems, we will stand alongside them.” Despite those warnings, nothing happened.

But there is one other detail that makes what Netanyahu said even more detached from reality. Melhem committed the attack with a weapon that he stole from his father. He used an Italian-made Spectre submachine gun that his father has a license for because he works for a security firm. Hence, no matter how serious the issue of the proliferation of guns in the Arab sector, it has nothing to do with the attack in Tel Aviv. In that sense, Netanyahu’s recent statement is reminiscent of what he said on the day of the last election on March 17, 2015: “Arab voters are coming out in droves to the polls. Left-wing organizations are busing them out." Once again, the prime minister’s incitement has nothing to do with the facts. He has made every Israeli Arab a suspect, if not for terrorism per se, then for supporting or encouraging it. And if not that, then for possessing an illegal weapon.

There have been dozens of knife attacks, vehicular attacks and shootings since early October 2015, but to date, the terrorists behind just three of those attacks were Israeli Arabs, and they supposedly went through a process of religious radicalization, leaving them with a worldview similar to that of the Islamic State (IS). The two previous Israeli Arab assailants were Alaa Ziwad from Umm al-Fahm, who was responsible for a stabbing and car-ramming attack near Kibbutz Gan Shmuel on Oct. 11, in which a female soldier was seriously injured, and Mohannad Khalil Salam al-Okbi from an unrecognized Bedouin village near the locality of Hura, who was behind the Oct. 18 attack in Beersheba, in which a soldier and an Eritrean asylum seeker were killed, the latter by Israelis who apparently either out of panic or anger shot him, mistakenly identifying him as the attacker.

The numbers show that this is a marginal phenomenon, limited to a few individuals, with few to no ties to their communities. The truth is that most Israeli Arabs are worried about the problem. They see it as a genuine threat that must be fought — the sooner the better.

In general, Israel’s Arab sector, which makes up about one-fifth of the country’s entire population, is in the midst of a process of secularization, much of which can be attributed to the influence of Israel’s secular Jewish population. More people in Israel’s Arab villages are leaving religion than returning to Islam. The war against the hoarding of guns, violence, the infiltration of messages from IS, poverty, discrimination and the sense of alienation that young people feel toward the Israeli establishment are all important issues for the Arab population.

Day after day, their leaders plead with the state to help them in their struggle. Instead of building bridges to the Israeli Arab community and offering them the sense of belonging that they yearn for, Netanyahu is staying true to form and doing the exact opposite.