What happened to the mighty Shin Bet?

Neshat Melhem, who carried out a terror attack on Jan. 1 in Tel Aviv, has managed so far to fool the Israeli security apparatus and escape the scene. 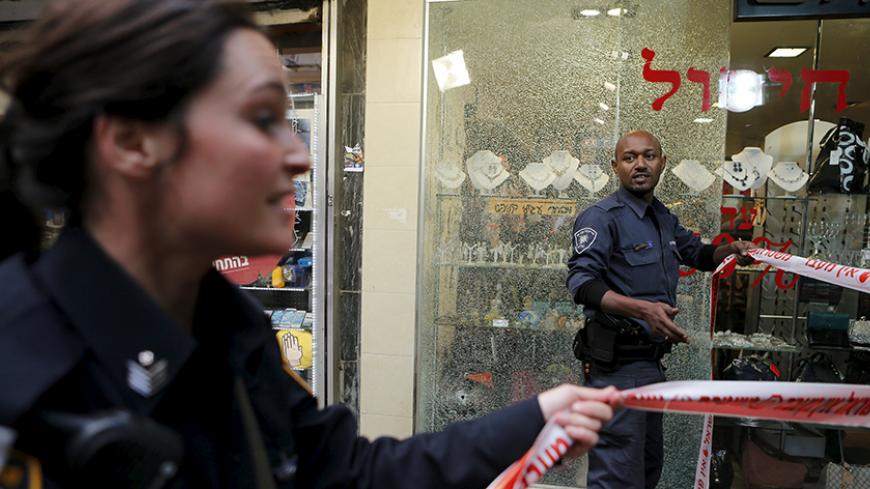 The reaction in Israel to the Nov. 13 terror attacks in Paris was one of amazement and disdain. Israeli security experts wondered why there had not been any advance warnings. How could Islamic terrorists operate so freely on the continent? Why weren’t the naive Frenchmen able to cope with events of this type on their own turf? Subsequently other rhetorical questions were asked: How could Brussels lock its gates for more than a week because of a warning? And how was it possible that a few terrorists were able to throw large European countries into such turmoil, without any proper response?

Israel, with the cumulative experience of more than 70 years of fighting Arab and Islamic terror, views itself as an upgraded, well-oiled machine in everything connected to the war against terror. We, the Israelis boasted, know how to deal with these sorts of situations.

Then, a man named Neshat Melhem arrived on the scene. On Jan. 1, which was a regular workday in Israel, Melhem, a 28-year old Arab Israeli from Arara village, showed up in Tel Aviv. Carrying a small backpack, Melhem ambled along Dizengoff Street, Tel Aviv’s equivalent to New York’s Fifth Avenue and Madison Avenue. He entered a vegan health food store, walked around and filled a bag with dried fruits; he then changed his mind and emptied the bag. He proceeded to the exit where he stopped and calmly placed his backpack on a shopping cart. He then removed an Italian-made Spectra submachine gun from the bag. Melhem walked out the door, leaving the bag in the store, and in that moment, as if bewitched, he transformed into a killing machine: He began to spray Dizengoff Street with bullets, shooting at the neighboring HaSimta pub, where he killed two youths. He continued his rampage for about 30 seconds, then ran amok and disappeared. He was seen on the security cameras replacing the weapon’s magazine while running. He then disappeared without a trace.

Five full days have now passed since the attack and the perpetrator is still at large. In the past, Israel’s Shin Bet justifiably prided itself on its rapid and efficient solving of far more complicated and deadly terror attacks than the one in Tel Aviv. Israel knows how to extract Palestinian terrorists from the depths of the casbahs in refugee camps located in the very hubs of Palestinian cities, with the help of precise intelligence information. This is true even when the attacks take place in the middle of the night in isolated locations, without eyewitnesses, security cameras or any other leads.

This time, the attack transpired in the middle of the day in central Tel Aviv, in front of dozens of eyewitnesses and quite a few security cameras. The attacker's identity is known, and all this happens a few hundred meters from a large police station. Yet somehow, Melhem succeeds in making a laughingstock of Israel’s experienced, well-oiled security machine.

It has been five days since residents of the Dan region in central Israel have been walking around gingerly. Parents are afraid to send their children to school, and police forces and special units comb neighborhoods, fields, streets and hiding places without having the slightest idea of where Melhem disappeared to.

The more time that passes, the foggier the picture becomes. It has emerged that in his flight Melhem hailed a cab and then murdered the cab driver close to the beach in north Tel Aviv. The cab driver, an Arab-Israeli father of 11 children, is now also counted among the victims of the terror attack.

The weapon used by Melhem belonged to his father, which, the father says, his son took from the safe in the family home in Arara. The father has been a volunteer with the Israeli Police for 30 years, and the family has no prior terror connection. Shortly after the attack, Melhem's father told the police that he had recognized his son on the security camera footage. Two days after the attack, the Shin Bet began to detain family members; first one brother, then another brother. On Jan. 5, Melhem's father was also detained together with five family members. It is unclear what they are suspected of, though it has become known that a telephone call took place after the attack between Melhem and his father.

The Israeli Police and the Shin Bet are unable to answer the questions of the public, and the government of Prime Minister Benjamin Netanyahu is placed in a difficult position. In his distress, Netanyahu found recourse — as he always does — in inciting against the Arab public. (Mazal Mualem detailed this in an Al-Monitor article.) On Dec. 30, Netanyahu’s government approved an unprecedented budgetary allocation of 15 billion Israeli shekels ($3.8 billion) to be invested in the Arab sector, in an effort to bridge economic gaps and alleviate inequality. Then, the Tel Aviv attack happens and the prime minister takes the opportunity to stipulate all kinds of preconditions for implementation of the funds. What concerns him is not the Arab sector, but the primaries for Likud Party chief; Netanyahu has moved the primaries forward to February. In addition, Netanyahu has found himself on the receiving end of scathing criticisms by right-wing Yisrael Beitenu Party head Avigdor Liberman, and he is dealing with the police investigation of his wife, Sara, who was interrogated for the second time this week.

Since a few weeks, a new general commissioner heads the Israeli Police. Contrary to regular procedure, Minister of Public Security Gilad Erdan did not appoint to the job one of the deputy police commissioners, but instead he employed Roni Alsheich from outside. Alsheich served as deputy director of the Shin Bet and was a leading candidate for the next head of the Shin Bet. The appointment caused a storm of protest in the police command ranks as well as in the media and with the public, but was perceived as a winning move that came to change and shake up the scandal-ridden, ossified police force. Only days after Alsheich (regarded as "Mr. Security") assumed his new office, a high-profile attack takes place in the heart of Tel Aviv. Meanwhile, neither the police nor the Shin Bet have any answers, as a young Arab makes a public laughingstock of them both.

The question being asked now in Israel is whether Melhem is sane, or whether he has a mental illness. He has a criminal past and spent five years in an Israeli prison for trying to grab a weapon from a policeman. He has committed in the past several violent crimes and has gone through psychotherapy, including an anger management workshop, and medicinal treatment. His family members also report that he is mentally unstable.

Melhem’s behavior in the course of the attack represents a quandary: If he wanted to kill as many Jews as possible, why didn’t he simply remain in the store and kill everyone inside? There were customers there who had nowhere to escape to. Why did he shoot erratically in the street? The problem is that according to the security cameras, Melhem appeared professional, premeditated and calculated. Most importantly, he succeeded in carrying out a terror attack in the heart of Tel Aviv, killing Jews and escaping unharmed. Luckily, there aren’t many more insane people like him.