Israeli media focused on the less significant details when covering the capture of the Tel Aviv gunman, instead of the main story concerning relations between Jews and Arabs in the country. 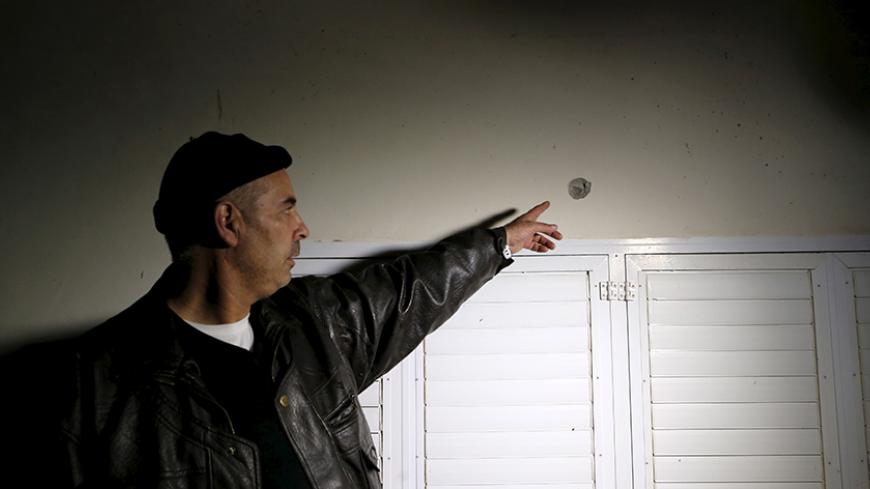 A man points to a bullet hole in a wall of a house at the scene where Arab citizen Neshat Melhem was killed in a shootout by Israeli police in the northern town of Arara, Israel, Jan. 8, 2016. - REUTERS/Ammar Awad

Close-ups of the corpse of Neshat Melhem, the Dizengoff Street terrorist, which appeared again and again on all three of Israel’s TV stations Jan. 8, were just the tip of the iceberg in what can only be described as an assassination festival, celebrating the death of a terrorist. It was the kind of festival that lasts all weekend and into the next week.

The bullet-riddled body was sprawled across the yard of the terrorist’s home in the village of Arara, in Wadi Ara. Pictures of it appeared alongside photos of Melhem’s hideout, complete with cigarette butts, bottles of cheap juice, used coffee cups and dirty dishes. There was an endless stream of reports from the scene, too, which helped frame what had happened into a laudatory picture, celebrating the triumph of good over evil.

The headlines selected by news editors helped to frame the incident. “Account Settled,” screamed one. “The Assassination,” cried another. These and other riveting combinations of words and phrases transformed the nature of the event. Instead of a failure by the security forces, letting the terrorist escape, the incident became a military operation where security forces had the upper hand. Thus, the media willfully adopted the narrative that the police and the Shin Bet tried to dictate. By accepting this, they sidelined basic facts: There was a deadly attack in the heart of Tel Aviv, in which a terrorist murdered three people, managed to escape and interfered with day-to-day life in the city for an entire week.

From the moment that Melhem was caught, the media focused almost entirely on how he was killed. It reconstructed his escape route while ignoring much more important questions raised by the incident, starting with security and ending with the longstanding fiasco that is the government’s attitude toward the country’s Arab citizens. It is an attitude shared by previous governments over the past few decades.

The police, the Shin Bet, Prime Minister Benjamin Netanyahu and Minister of Internal Security Gilad Erdan all managed to eliminate the question marks looming over them and become the heroes of a success story. The security forces granted journalists access to the scene of the assassination in Arara and allowed them to share all sorts of marginal but “colorful” details about Melhem’s hideout. Family members and neighbors of the terrorist were subjected to a barrage of questions, such as “Did you know?” or “Did you suspect?”

While no one challenges the fact that most Israeli Arabs want peace and the chance to live a normal life, the coverage of this weekend’s event automatically placed them on the side of the bad guys. They were expected to provide answers and take responsibility for Melhem’s crimes. It was a disconcerting sequel to the approach outlined by Netanyahu Jan. 2 in his speech at the scene of the attack.

Instead of engaging in a deep discussion about the social and security implications of the terror attack or focusing on its underlying causes, Israelis were forced to spend the weekend obsessing over the most minor details instead. As fascinating as Melhem’s escape route may be and as intriguing as it is that he managed to outfox the security forces an entire week, there is absolutely no excuse for spending hour after hour broadcasting and rebroadcasting the same exact images.

The truly significant questions received superficial coverage in the media at best and impassioned and populist coverage at worst. Politicians from the left and the right clashed vociferously in the studios. The right made the broad generalization that Israeli Arabs are not loyal to the state, while the left tried to argue that the government actually encourages citizens to engage in such extreme acts. As the media storm reached its peak Jan. 9, Netanyahu released a prerecorded message to the nation in which he praised the killing of Melhem and promised that the long arm of the security forces would reach whomever tries to harm Israel, both within the country and overseas. There was no attempt to offer a calming message or an inkling of hope to the country’s Jewish or Arab citizens after such a tense and difficult week.

While the killing of Melhem brought an end to the incident that began last week, it left many unanswered questions, particularly with regard to the fragile relationship between Israel’s Jewish and Arab societies. The public deserves to have the media discuss why a 29-year-old Israeli Arab, who was born here in Israel and grew up among us, would kill his Jewish peers with such alarming indifference. That seems more important than how many cups of coffee he had until he was captured. Then there is the question of why other Israeli Arabs would help Melhem after knowing what he did. It should have been at the center of the discussion.

The incident in the heart of Tel Aviv began on the afternoon of Jan. 1, when two young people were killed at a birthday party at the Simta bar. The attack should be treated as yet another manifestation of the wave of terror that began last October and has since come to be known as the “individual intifada.” The severity of the incident and the fact that the perpetrator was an Israeli Arab make it a significant milestone. While most terrorist attacks occur in Jerusalem and across the Green Line and consist mainly of stabbings and vehicular assaults, the attack at the Simta bar is different, not least because it involved the use of an automatic weapon.

As mentioned earlier, instead of engaging in a necessary and solemn discussion about the incident and its implications, we received yet another dose of a very impassioned but shallow media discourse. The Israeli press is frequently accused of aligning with the left. While this can be contested, after last weekend’s coverage one thing is certain: The product of its work, its narrative and message are aligned most clearly with the right.