Instead of reassuring the public after the recent Tel Aviv shooting, Prime Minister Benjamin Netanyahu expertly stoked the public's fears. 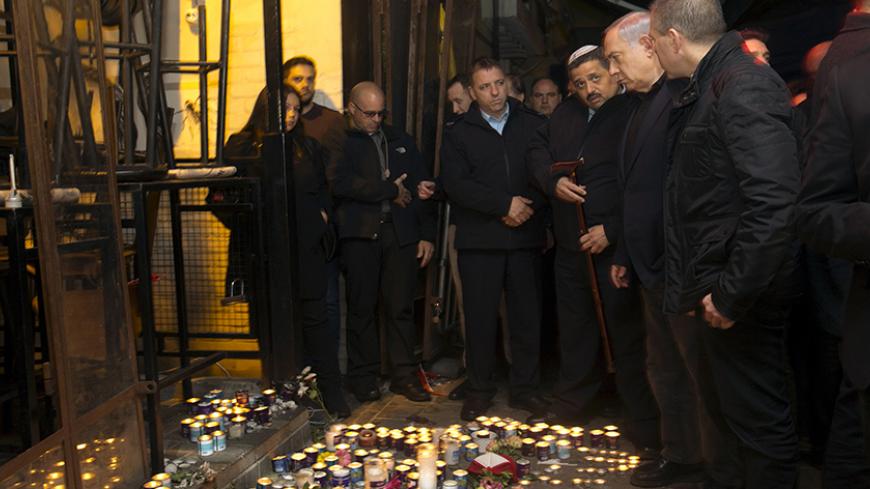 Two whole days passed between when a suicide bomber blew himself up at the entrance to Tel Aviv’s Dolphinarium club in June 2001 until then-Prime Minister Ariel Sharon issued his first statement about the incident. That attack has been etched into Israel’s collective memory as one of the most brutal events of the second intifada. The victims were young people who had gone out to party on a Friday night. The incident left 21 dead and many dozens injured. Meanwhile, people across the country felt a deep sense of vulnerability. They were starting to think that the government was helpless in the face of this terrorist threat.

Sharon was elected prime minister in February 2001, less than half a year after the second intifada erupted. Until then, he made a point of not visiting the sites of terror attacks, not responding off the cuff with aggressive language and not getting dragged into rash military operations. As the wave of attacks continued, the public grew increasingly critical of the prime minister. This was especially apparent among Sharon’s base of supporters on the right.

Nevertheless, as was the case of the Dolphinarium attack, Sharon refused to be distracted or break habit. He remained restrained, even as criticism of him and his policies soared to new heights and his popularity plummeted in the polls.

"I don’t believe in talk," he said at a press conference after visiting the wounded in Ichilov Hospital. “I don’t believe in public statements. I believe in action.” In response to the criticism he was drawing from the right, he made do with a very simple statement that has since come to exemplify his particular leadership style: “Restraint is also part of being strong.” Many months would pass. There would be more deadly suicide attacks, culminating in the March 2002 attack on families celebrating the Passover eve Seder meal at the Park Hotel in Tel Aviv, where 30 Israelis were killed, before Sharon sent the Israel Defense Forces into the territories in Operation Defensive Shield.

The current wave of terrorism sweeping over Israel is unlike the second intifada. It is much more limited in scope, and tends to be centered around Jerusalem and across the Green Line. Though there have been dozens of attacks, Arab citizens of Israel were responsible for only three of them, while the local Arab leadership is working hard to maintain calm. Over the last weekend, Prime Minister Benjamin Netanyahu was updated regularly about the security forces’ hunt for Neshat Melhem, who allegedly murdered two young people and wounded seven others on Dizengoff Street in Tel Aviv on Jan. 1. Netanyahu was also informed of the panic that had spread across a city that has come to reflect the sanity level of normal life in Israel. For several days now, people have been living in terror after the perpetrator managed to escape.

The prime minister needed to muster all his rhetorical skills and his adeptness with the media to face the swell of criticism — from both the right and the left — over the ongoing wave of violence and the citizens' overriding sense that they are no longer safe. Arriving at the scene of the incident on Jan. 2 accompanied by Internal Security Minister Gilad Erdan and Police Chief Roni Alsheikh, Netanyahu delivered a divisive speech that drew criticism not only from his political rivals, but also from some media commentators.

Netanyahu’s comments were not intended to strengthen and unite the public in these difficult times of confusion and fear. He preferred to secure his standing among the Jewish population by maligning all of the country’s Arab citizens. With his words, he portrayed an entire sector as a group infatuated with illegal weapons, as a ticking time bomb. Though the prime minister did not blame the Arab sector for the attack — even praising those leaders who condemned it — his comments focused on how the law is not enforced in the Arab sector. His rhetoric was, in fact, rather sophisticated. Concerned and confused citizens who read between the lines would come to blame the violence on the current situation in the Arab sector.

Netanyahu was not moved by this criticism. He responded the exact same way as he did to the criticism after his statement on election day that Arabs were “heading to the polling stations in droves.” All he cares about is the immediate benefit. In this case, he managed to divert the discussion away from all of the security failings, which allowed the murderer to act and then escape, from the ongoing wave of violence and from the many decades of discrimination faced by Israel’s Arab community to focus on the number of illegal weapons kept by Israel’s Arab citizens.

Netanyahu then continued with his standard rhetoric, promising to take action to change the situation. In this case, he made a commitment to expand law enforcement in the Arab sector, saying, “We will enter all their settlements and demand that everyone show loyalty to the state’s laws.” But even this promise is both meaningless and infuriating. Its main purpose was to cast aspersions on Israel’s Arab citizens, even if only indirectly. Netanyahu has been prime minister for almost seven years now, and during that time, the Arab leadership has pleaded with him again and again to increase the police presence and law enforcement in their towns and villages and reduce the number of guns.

Another typical element in all of Netanyahu’s speeches is a display of leadership through his use of firm, declarative statements. In his Jan. 2 speech, he said, “Everybody knows that radical Islam is engaged in wild incitement against the State of Israel within the Arab sector. This can be found in the mosques, the schools, the social networks. … I refuse to accept two states in Israel. A state of law for most citizens, and a state within a state with Islamist incitement and illegal arms that are often used in weddings, celebrations and criminal incidents. … That period is over.”

Finally, Netanyahu took a page from his old playbook to make sure that the public was left hopeless and worried about its safety, believing that as long as the terror continues, there is no one better suited than him to be at the forefront of Israel’s leadership. The lack of hope that is a key element in the prime minister’s intimidating rhetoric is essential to maintaining his political power. It is, effectively, a kind of brainwashing, and the prime minister makes a point of using it on the people of Israel at fairly regular intervals. What he is effectively doing is ensuring that the public remains his mental hostages.