HaBayit HaYehudi's Naftali Bennett and Ayelet Shaked are hoping to score political points by calling for a wide-scale military operation in the West Bank despite security establishment assessments that a military response is not the answer to the current wave of attacks. 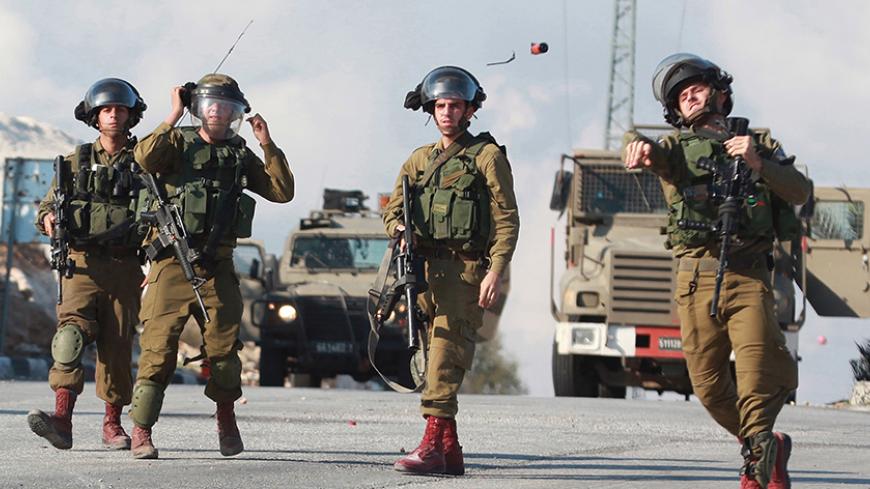 An Israeli soldier throws a sound grenade at Palestinian protesters during clashes in the West Bank city of Bethlehem, Oct. 31, 2015. - REUTERS/Abdelrahman Younis

HaBayit HaYehudi Chairman and Education Minister Naftali Bennett, together with his party’s No. 2, Justice Minister Ayelet Shaked, launched a campaign for “Operation Defensive Shield 2” on Nov. 22. In short, while invoking 2002's Operation Defensive Shield, they are calling on the government to embark on an extensive military operation in Judea and Samaria to curb the current wave of terror.

Both Bennett and Shaked, members not only of the government but also of the tight-lipped diplomatic-security Cabinet, apparently prefer to ignore the minor detail of discretion and instead express their opinions in the media about the military steps they believe Israel should take. Yet this is the least problematic aspect of their militant appeals. The Israeli public has already grown accustomed to Bennett and Shaked's antagonistic and empty statements designed to show their constituents that they are fulfilling their public mission, thus earning them political capital among their hardcore supporters.

The incessant terror attacks against Israeli citizens, primarily settlers, are the impetus for their recent statements. Residents of the Etzion settlement bloc are experiencing attacks on a daily basis and feel abandoned at a time when their lives are on the line. They therefore direct their wrath at the government, and HaBayit HaYehudi has naturally become the address at which to express their dissatisfaction with the government's response.

The situation is problematic for HaBayit HaYehudi, the party of the settlers. Bennett and Shaked understand that to avoid pitfalls in the eyes of party members, they must distance themselves from Prime Minister Benjamin Netanyahu. In other words, they have to publicly paint him as weak and ineffectual and present themselves as firm, assertive policy leaders in the Cabinet. For electoral reasons, they also cannot allow themselves to be viewed as passive compared to Yisrael Beitenu Chairman Avigdor Liberman, who is gaining in the polls. Liberman, from his position in the opposition, has been persistently calling on the government to enter Hebron and resume targeted killings in Gaza. Thus, with the goal of curbing potential criticism aimed at them and deflecting fire to Netanyahu, Bennett and Shaked have called on the government, in which they are senior members, to embark on an Operation Defensive Shield 2.

In a Nov. 23 interview with Army Radio 24 hours after the murder of Hadar Bucharis at the Etzion bloc junction, Bennett explained with his characteristic resoluteness, “We need to go into Hebron with very large forces, into the towns around it. … There is no alternative but to carry out a kind of Defensive Shield in this sector.” He continued, “The original Defensive Shield in 2002 was unpleasant, but yes, we went into the cities as well as into the villages, and we cleaned them out, and terror dropped by 80%. … I will continue to push this strategy in the Cabinet.”

Shaked, who coordinates her every move with Bennett, had made a similar statement to Army Radio a day earlier. She explained, “It will not be enough only to surround the villages, but we think that in the end [we] will also need to enter a number of areas and villages and clean them [of] weapons.”

Bennett and Shaked's emphasis on Operation Defensive Shield is not without calculation. Former Prime Minister Ariel Sharon launched the operation after the attack on the Park Hotel in Netanya that killed 30 Israelis during a Passover Seder. It was the nadir of one of the most horrific months, since called “Black March,” of the second intifada (2000-2005), with 105 civilians and 26 soldiers killed in terror attacks. It also signaled the end of Sharon’s restraint throughout the long months of the intifada that included the June 2001 Dolphinarium disco attack, in which 21 teens were killed. After the Park Hotel attack, Sharon made the decision to embark on a large-scale military campaign to destroy the terror infrastructure in Judea and Samaria.

The public backed the effort. Reserve soldiers reported to duty with a sense of mission, and within six weeks, the terror infrastructure had been crushed. The Israel Defense Forces operated in every West Bank city, killing and arresting hundreds. A siege was imposed on the Muqata, Palestinian Authority headquarters in Ramallah, where Yasser Arafat, chairman of the Palestine Liberation Organization was holed up, and on the headquarters of Jibril Rajoub, a senior Fatah member, in Bitunia. Israel held these two responsible for pulling the strings of the uprising.

Operation Defensive Shield was a turning point in the intifada, a tie-breaking campaign that helped extinguish the rebellion. Over the years, it became a “brand,” a symbol of success in the war against terror. That is why Bennett and Shaked chose to focus on the operation and are attempting to expropriate it for their own benefit. At the same time, they aren't letting facts distract them in their effort to score political points and appear to be doing something. Operation Defensive Shield was directed against the terror infrastructure in the Palestinian Authority: It had an address, clear objectives, intelligence goals and potential for success. Against whom do Bennett and Shaked think Israel should operate today? It is not clear. How do they plan to destroy terror infrastructure when everyone knows that the current violence is not organized terror?

In addition, as members of the diplomatic-security Cabinet, Bennett and Shaked are privy to assessments made by the military. Thus they must be aware that Palestinian President Mahmoud Abbas is not behind the current terror and even wants to calm the chaos. They are supposed to be familiar with the evaluations of the security establishment, which believes that the solution is not military in nature. They supposedly also know that it thinks it would be ineffective to move against the entire Palestinian population, demolish homes and impose sieges. Bennett and Shaked’s statements must therefore be viewed through a political lens. One can only hope that they actually recognize the senselessness of their own words.

A highly placed Likud official close to Netanyahu spoke to Al-Monitor about the absurdity of Bennett’s statements. “Does Naftali Bennett really intend to wipe the [thought of] terror from the minds of 12-year-old children who go out to kill with a knife?” he asked sarcastically and speaking on condition of anonymity. “The reference to Operation Defensive Shield is idiotic. Most of the acts of terror are spontaneous and cannot be predicted. There is no intelligence on the intentions of a young Palestinian girl who takes a pair of scissors to attack people at the Etzion bloc junction or somewhere else. The only thing that comes to mind is that Bennett must think that no one will confront him over this stupid idea, and meanwhile he’ll score points on the right at the prime minister’s expense.”