Unlike former Prime Minister Ariel Sharon, who called for restraint after the Dolphinarium terror attack, Prime Minister Benjamin Netanyahu has not silenced his far-right ministers who are calling to avenge the murder of the three youths. 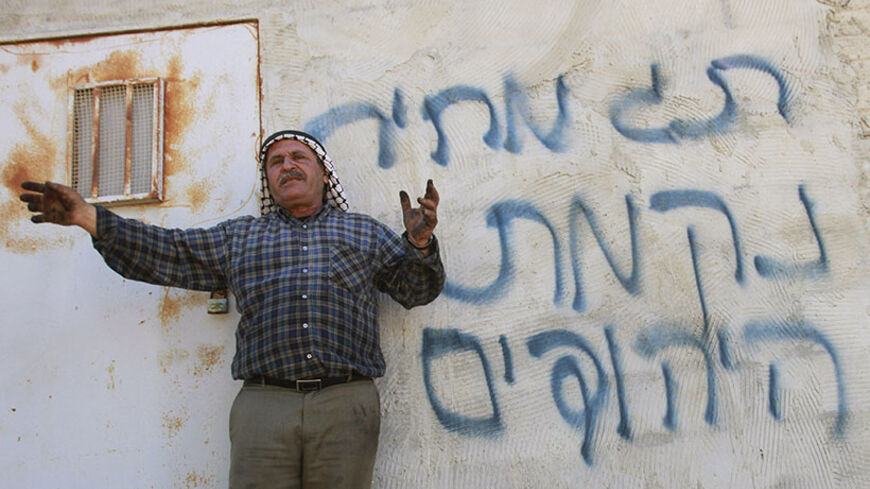 A Palestinian farmer gestures to members of the media in front of Hebrew graffiti allegedly sprayed by Jewish settlers after they burned his property in Aqraba, near Nablus, July 2, 2014. The graffiti reads "price tag" (top) and "Jewish revenge." - REUTERS/Abed Omar Qusini

It was the height of the second intifada, just three days after the suicide attack at the Tel Aviv discotheque Dolphinarium that left 21 people dead. Ariel Sharon, who was then prime minister, paid a visit to the many wounded at the Tel Aviv Ichilov Hospital, some of them still fighting for their lives. “We are confronted with a very harsh campaign,” said Sharon. “I just want to tell you that restraint is also a sign of strength.” His remarks were seen as a sign of weakness by the political right, which he headed at the time.

The Dolphinarium bombing was one of the most brutal attacks of the second intifada. It was only natural that the images of young people standing in line to get into a beachside dance club in Tel Aviv on a summery Friday night, their violent deaths and the tragic funerals that followed would evoke a harsh response from the public. The political right immediately called for a hard-hitting response. On the day after the attack, hundreds of incensed young people went to the nearby Hassan Bek Mosque and started throwing stones. Scuffles broke out between Muslims and Jews, and the police were forced to intervene.

At the time, Sharon was also the head of the Likud. The public was exhausted by the frequent terrorist attacks that resulted in hundreds of fatalities. People were calling for revenge. And yet, even after that horrific terrorist attack in Tel Aviv, the prime minister decided to continue with his policy of restraint.

For almost an entire year, the suicide attacks continued unabated. And it was only then, two days after the horrifying attack on the Park Hotel in Netanya on March 27, 2002, that left 30 people dead as they gathered around their tables to celebrate the Passover traditional Seder meal, that Sharon launched Operation Defensive Shield.

The operation focused on eliminating terrorist infrastructure in the West Bank. It was considered a military success and a milestone in the second intifada. It led to a noticeable drop in the number of suicide attacks. For the most part, the international community was supportive of Israel’s military action.

It is hard not to compare Sharon's restrained leadership, which impacted most of his ministers, and the inflammatory, sometimes delusional voices reverberating now from the Security Cabinet ever since the bodies of the three teens were found. Instead of promoting calm and moderation, these voices are inciting an already irate public.

Minister of the Economy and Trade Naftali Bennett, a member of the Security Cabinet, proposed a far-reaching operation throughout the West Bank and Gaza, annexing the West Bank and imposing the death penalty on terrorists. Meanwhile, in the background, Foreign Minister Avigdor Liberman demanded June 23 that the government “seriously consider occupying the entire Gaza Strip and launching a serious cleanup operation there.”

Bennett was outraged that “They kidnapped three children and executed them point-blank.” He would not calm down even when the chief of staff and the defense minister both explained to him that what he was suggesting could lead to war. “We’ll end up going to war in Gaza anyway," he said. "Better we should be the ones who start it.”

Given this incendiary mood, it should come as no surprise that we woke up on the morning of July 2 to violent clashes and the news that an Arab teen in East Jerusalem had been kidnapped and murdered. More moderate voices from Ministers Tzipi Livni, Yair Lapid and Yitzhak Aharonovich were overwhelmed by the disproportionate battle cries of Bennett and the right wing.

It is perfectly obvious what Bennett is trying to achieve. He identified a difficult moment for the Israeli public in general and for the right in particular, and he is riding the wave of implacable desire for vengeance as far as he can, just to earn immediate political points. It is fairly certain that the chairman of HaBayit HaYehudi knows that his proposals will not be accepted. Nevertheless, he is using his extremist demands to win the support of the right. He wants to be the “man” in the Cabinet, and certainly more manly than the prime minister and defense minister, who are courting the same constituents. Bennett acts as if there is no country to run, no international opinion, no diplomatic interests and no limitations on military strength. All that matters are his provocative, puerile and dangerous calls for widespread and unfocused retaliation, come what may after that.

It is at times like this that one question emerges: Where does the prime minister stand? Netanyahu is reluctant to launch an extensive operation in Gaza, a position that corresponds to his tendency toward military restraint. At the same time, however, he is not doing what he should do as a leader by putting Bennett in his place. There is a political reason for this, that much is obvious. Netanyahu still relies on the votes of the right, so he doesn’t want to be perceived as weak or hesitant. Though the murders, as shocking as they were, will not change a thing strategically, he was quick to gather his Cabinet for long meetings. It is difficult to avoid feeling that these emergency Cabinet sessions were only intended to emphasize that the prime minister is responding to the situation with the requisite urgency and severity, while extricating him to some degree from mounting public and political pressure. Then came the moment of truth, when Netanyahu should have put a stop to the provocative statements. Instead, he succumbed to them.

The extent to which politics pervades the Cabinet room can also be seen in the proposal by Defense Minister Moshe Ya’alon that Israeli settlements in the West Bank be strengthened in response to the attacks. On one hand, Ya’alon exhibited responsibility when he made it clear to the Cabinet that an extensive military operation in Gaza would have limited outcomes. (Haaretz reported that he told Bennett, “You insist on kicking at the wall, but you’ll eventually find out that you’re barefoot and your leg hurts.”) On the other hand, in almost the same breath, he called for a wave of new construction in the settlements, even though the move would be diplomatically devastating and result in political outrage. But Ya’alon, who was chief of staff during Defensive Shield, hopes to replace Netanyahu one day as chairman of the Likud and leader of the right. He cannot allow himself to get caught behind Bennett in the race for public approval.

On the right, Bennett has one advantage over Netanyahu and Ya’alon: He can be provocative. As far as he is concerned, he can get away with proposing the conquest of all the Arab states without bearing any responsibility for it. In this competition over who can be the more incendiary, the prime minister and the defense minister are both at a distinct disadvantage, because anything they say could have practical consequences in the real world. The Security Cabinet is one of the highest decision-making forums in the State of Israel, and this is the mood in which it operates.

Netanyahu must realize that when a senior Cabinet member calls for imposing the death penalty on terrorists, the remarks have an immediate impact on the public, especially when that public’s ever-expanding margins are demanding “death to the Arabs.” With all signs indicating that the situation is about to reach a boiling point, this is exactly the right moment to stop and prevent it from escalating. It is time for Netanyahu to be the responsible adult in the room, so that he doesn’t find himself caught up in a military adventure that could get out of control.