Does Netanyahu's political future depend on Hamas?

The Israeli prime minister is on shaky ground after acting against the will of his electorate concerning Gaza, but he has a historic opportunity to recreate himself as a leader by spearheading fresh new diplomatic moves that appeal to the Israeli center. 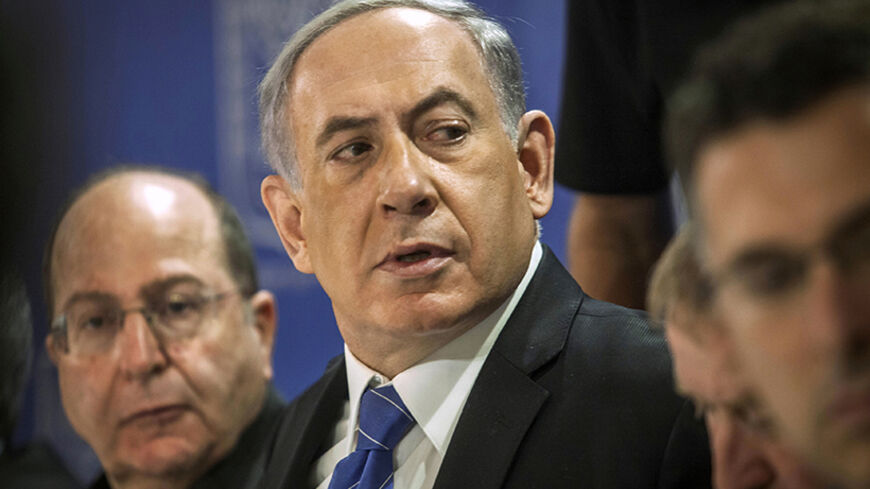 “As bad as it may sound, Benjamin Netanyahu’s political future depends on Hamas,” explained a senior Likud minister discussing the situation facing Israel’s prime minister. According to him, Netanyahu’s future depends on the near-term military capabilities and ambitions of the Hamas leadership and the way Israel responds to them. Over the course of our conversation, which took place the afternoon of Aug. 3, a siren pierced the Tel Aviv sky, reminding us of the complex challenges facing Netanyahu.

Less than a day earlier, on Saturday night, day 26 of Operation “Protective Edge,” Netanyahu once again stood behind the podium at the Ministry of Defense in Tel Aviv in an effort to etch a victory narrative in the minds of Israelis. He had slept very little in the past few weeks and signs of exhaustion were apparent on him, even when he spoke about Israel’s significant military achievement in uncovering Hamas’ network of attack tunnels or when he mentioned the heroism of Israel’s troops and the public’s resilience throughout the campaign. Yet, despite the wording of his comments, the lilt in his voice failed to relay the joy of victory or even any sense of relief as a just war drew to a close. What ended up emphasized instead was the severity of the situation, set against ongoing reports of sirens and rocket fire directed against Israel.

It was also hard to ignore Netanyahu’s isolation. Though Defense Minister Moshe Ya’alon was sitting next to him, he was also unable to announce to the Israeli public the war had come to an end.

A few hours later, the public was informed that the abducted officer Hadar Goldin, a relative of the defense minister, was declared dead. This only made the mood heavier. There was increasing criticism from experts and politicians on the right, even from the Likud, that the mission in Gaza had not been completed. The old familiar sound of political war drums will accompany Netanyahu as long as Hamas is still capable of harming Israeli soldiers and civilians.

Netanyahu has so far succeeded in containing efforts to undermine his political and public status during wartime. He ignored statements by Foreign Minister Avigdor Liberman and by Economy and Trade Minister Naftali Bennett, both members of the Security Cabinet, even though they described Netanyahu as a feeble and weak leader. It is no exaggeration to say that it wasn’t easy for Netanyahu, who had to deal with the leaders of two right-wing parties competing with him for the same electorate. It could hardly be expected that Netanyahu would be able to defuse their demands for an extensive ground campaign in Gaza, with all the political significance that entailed, or that he would act as if he was completely detached from them. His military moves were well-reasoned and circumspect, and his targets were practical. The more he proved that he was not carried away by voices from the right, including those within his own party, the faster public criticism of him lost its momentum.

Of course, this is no consolation, as far as Netanyahu is concerned. It is only a matter of time before the prime minister finds himself up to his neck in the political quagmire. As the fighting dies down, Liberman and Bennett will resume their attacks on Netanyahu with all the force that they can muster.

But they aren’t the only ones to challenge Netanyahu. All one has to do is take a quick look at the Facebook pages of Likud ministers and Knesset members. Especially blatant are the pages of Knesset members Danny Danon and Miri Regev, who continue to call for the retaking of Gaza against an incessant barrage of rocket fire, or of Zeev Elkin, chairman of the Foreign Affairs and Defense Committee, who was already quick to announce — much to Netanyahu’s chagrin — that the committee he heads would investigate the operation. In the Likud Party, by the way, the trio of Regev, Danon and Elkin has been nicknamed the “Tea Party” group.

Interior Minister Gideon Sa'ar, who is eyeing on Netanyahu's seat, didn't spare his criticism, either. At an event to mark the ninth anniversary of the disengagement from Gaza, he recommended that Netanyahu actually tighten the siege. In doing so, he was insinuating that Netanyahu isn’t being firm enough.

These voices from the political right rely, of course, on the mood of the public, as it is reflected in surveys. On the evening of Aug. 3, Israeli Channel 2 TV released the results of a poll that claimed 73% of the Israeli public believes that Israel’s capacity for deterrence was weakened by the decision not to continue with the ground offensive. Neither is the situation encouraging as far as the prime minister's status is concerned. Since the start of Operation Protective Edge, Netanyahu obtained record support of 82% when he decided to launch the ground offensive. Support for him has been declining ever since, reaching just 62% this weekend. Yet even despite this sharp decline, 62% is still very respectable. There is no doubt that Netanyahu would be glad to have that level of support in the future as well.

Hamas dragged Netanyahu into the current war in Gaza. It is an open secret that Netanyahu did everything he could to avoid getting into this conflict, that he postponed it until he had no choice left and that even then, he delayed the ground operation. During his last term in office, Netanyahu prided himself on the fact that unlike his predecessor Ehud Olmert, who embarked on two wars, he hadn’t launched a single campaign. But now Netanyahu can also add a war to his resume.

In many ways, this is the greatest challenge that Netanyahu has faced since he returned to the prime minister’s office in 2009. He is standing on shaky political ground. He acted against the will of his core electorate on the right and undoubtedly suffered from it within his own bloc, and even among his own party. Yet despite the political damage he incurred, he was also provided a historic opportunity to become an influential player in a powerful regional alliance. He could be part of a broad coalition consisting of the United States, Europe and the moderate Arab states against Hamas. This is a critical moment in which Netanyahu can reinvent himself as a leader, just like his predecessors in the Likud did after acting against the will of their electorates (late Prime Ministers Ariel Sharon for initiating the disengagement and Menachem Begin for signing the peace treaty with Egypt).

How well does Netanyahu really understand the importance of this moment and the enormous opportunity that it presents? Right now it’s hard to tell. He did mention it explicitly in a statement to the press on the night of Aug. 2 when he noted, “The unique link that has been forged with the states of the region — this, as well, is a very important asset for the State of Israel. With the cessation of the fighting and the conclusion of the campaign, this will open new possibilities for us.”

While it is true that Netanyahu did not include Palestinian Authority Chairman Mahmoud Abbas in this equation, at least he stopped sniping at him, as he has been prone to do over the past few years. It is not difficult to identify this moment as a rare diplomatic opportunity, with Egypt, Jordan, Saudi Arabia and Abbas on Israel’s side against Hamas. The mood has undoubtedly changed, and this shift could even be seen in the firm stand taken by Jordan’s prime minister, who rejected calls throughout his country to expel the Israeli ambassador, and from the support from the president of the United States.

In many ways, Netanyahu now has his back against the wall, but that is precisely why this is a defining moment for him. The right will take steps to eliminate him politically. Throughout his career, Netanyahu has proved time and again that his desire to maintain his right-wing base of support overshadows any desire he might have to embark on a diplomatic process that could lead to compromise. Hamas rockets fired against Israeli towns and villages will only weaken him. On the other hand, a fresh new diplomatic approach could reshuffle the deck and position Netanyahu in the political center. There are plenty of seats there looking for a leader.