Obama misses the mark on Netanyahu 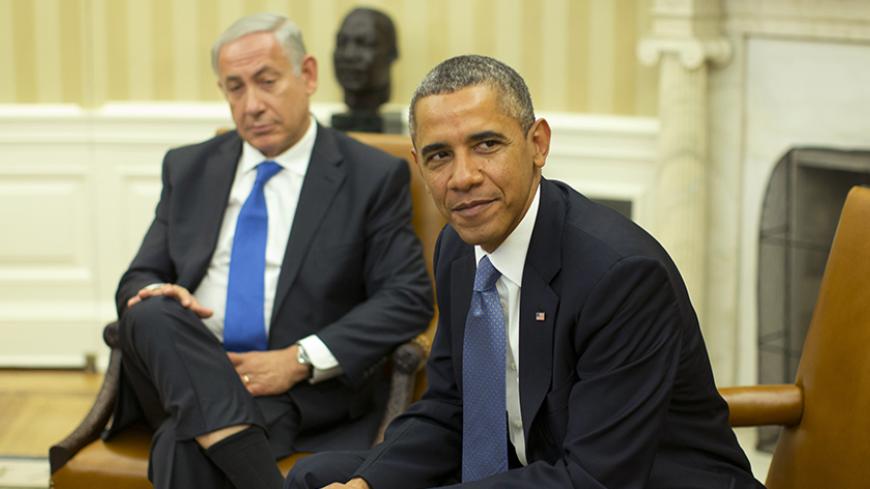 "In some ways, Bibi is too strong [and] in some ways Abu Mazen is too weak …" said US President Barack Obama concerning the stalemate in the Middle East’s diplomatic negotiations during an extensive interview he granted analyst Thomas Friedman from The New York Times Aug. 8. “… Netanyahu’s poll numbers are a lot higher than mine," and " were greatly boosted by the war in Gaza,” he said. According to Obama, only internal pressure will lead Netanyahu to compromise.

Obama is not alone. Just a little over two years ago, in May 2012, Time magazine devoted its cover story to Prime Minister Benjamin Netanyahu under the heading “King Bibi,” crowning him as the omnipotent king of the State of Israel. This, in fact, appears to have been the working premise of the Obama administration ever since the beginning of Obama’s presidency: Netanyahu is strong. There’s no point in messing with him. We should accept him and make the best of it.

Incidentally, less than a year after this fabulous Time cover story, in January 2013, Netanyahu took part in the elections, but was not pitted against any serious contender. There was no real alternative to vie for the premiership. Yair Lapid, the current finance minister, was back then a journalist who had recently left the TV studio. The socialist Shelly Yachimovich from the Labor Party was too powerless to win. Naftali Bennett, the current minister of economy and trade, had served as one of Netanyahu’s underlings not long before that. Avigdor Liberman, the current foreign minister, was unable to break through the glass ceiling of the Russian electorate.

Yet, despite running for election under ideal lab conditions and having virtually no competition, Netanyahu was barely able to garner 20 seats on his own — roughly 16% of the popular vote. Had he not teamed up at the last minute with Liberman, who garnered 11 extra seats, Netanyahu would have been unseated by Yachimovich, Lapid or someone else.

Obama’s statement about Netanyahu’s strength shows how much the Americans fail to understand the Middle East, its politics in general and Israel’s politics in particular.

The fact that the president uses Netanyahu’s “high poll numbers” to drive his point home highlights this lack of understanding. For an Israeli prime minister not to enjoy high approval ratings during war is unheard of, just like in the United States. The thing is that you need to gauge the prime minister’s approval ratings at the end of the war, not at its beginning or even in the middle. It is only when the dust settles and the outcome becomes apparent that the public starts digesting what went on and who won. Only then can the effects of the war be talked about.

Former Prime Minister Ehud Olmert started the Second Lebanon War in 2006 with an 88% approval rating in the polls, ending it, however, with merely 8%. Furthermore, sometimes it takes weeks or even months to determine whether the war was “good” or “bad.” So Netanyahu's approval rating might be boosted by the polls at this stage, but these figures have no real validity.

And there’s more: Netanyahu now gets credit mainly from centrist and left-wing circles for conducting the war pragmatically and sanely and for not having been dragged into a broad ground operation as demanded by Ministers Liberman and Bennett. Those centrist and leftist circles will never give Netanyahu their vote. It’s the war that now makes them like him, but they will never join his electoral base. So while Netanyahu’s popularity is rising, the number of his voters is nevertheless declining. On the political right — Netanyahu’s home base — the prime minister is losing credit these days. The right, having heard Netanyahu as chairman of the opposition promising to topple Hamas rule, might part ways with him come Election Day. Netanyahu knows this all too well. Obama, so it seems, does not.

The truth of the matter, Mr. Obama, is that Netanyahu is the weakest prime minister in Israel’s history. Never before have we had a weaker premier.

Olmert, who throughout most of his term enjoyed zero support in the polls and was constantly under several concurrent police investigations, was immeasurably stronger than Netanyahu. He launched two large military operations, fortifying Israel’s deterrence on the northern front and establishing deterrence in Gaza. He destroyed a Syrian nuclear reactor under the world’s radar and presented Palestinian Authority President Mahmoud Abbas with a sealed, bold and unprecedented peace proposal. To do all this, Netanyahu would need a 200-year term, in the very least.

So why is Netanyahu weak? First of all, it is his personality. “Netanyahu is not cut out for such decisions,” a senior Israeli Cabinet member told me as I was trying to summarize Operation Protective Edge last week. Even when he encounters Hamas terrorism and dozens of explosive tunnels that were dug under Israel’s southern communities as well as thousands of rockets fired all over Israel, he is still unable to do the job he was elected to do. He drags his feet in Gaza, biting his nails, waiting for things to blow over so he could return home safely. Netanyahu is practically incapable of making momentous decisions, all the people who have worked with or under him are saying. It seems to me that even the US administration has learned this, firsthand.

And even when he does make a decision, delivering his “Bar Ilan speech” (2009) or promising the president in the Oval Office to take a “historic step,” he will never follow through. This is what happened with the Wye River Memorandum, which Netanyahu breached as soon as he landed back in Israel following his discussions in the United States. That was also the case with the Bar Ilan speech or the prisoner release deal. Netanyahu is a weak, frightened man whose main objective is to remain prime minister. This is something that his coalition partners as well as his political rivals know all too well. It seems to me that even the outstanding US ambassador to Israel, Dan Shapiro, fully understands this today.

But there is also a political weakness. Unlike what Obama thinks, Netanyahu is at an almost unprecedented political low point. His partnership with Liberman, which put him in power some 18 months ago, has dissolved. Liberman cut himself off from Netanyahu, vowing to do anything to have him unseated. Bibi is well aware of that.

Yet, Liberman did not stop at that. When Likud Party Knesset member Reuven Rivlin was elected president of the State of Israel, the next in line to take his place in the Israeli parliament was Carmel Shama-Hacohen, a Likud member as well. Liberman came with a lucrative proposal to the newly-appointed Shama-Hacohen to appoint him as Israel’s ambassador to the Organization for Economic Co-operation and Development (OECD). Shama-Hacohen gladly accepted the proposal and left the Knesset. The next in line on the list to replace him was a Knesset member from Liberman’s Yisrael Beitenu Party. The Likud and Yisrael Beitenu had a joint slate in the last elections. Liberman knew very well that dispatching Shama-Hacohen on this diplomatic mission would reduce the number of Likud Knesset members from 20 to 19, while increasing the number of his Knesset members from 11 to 12.

As of today and until further notice, Netanyahu has only 19 Knesset members, the same number as Lapid’s Yesh Atid Party. The difference is that Lapid’s partisan members are disciplined and work in unison. Yet when it comes to Netanyahu’s partisan members, roughly two-thirds of them are unruly, leveling scathing criticism at the prime minister over Gaza. Some of them are even scheming to have him impeached. Minister of the Interior Gideon Saar, for example, is considered Netanyahu’s archrival. Minister of Regional Development Silvan Shalom is not considered one of Netanyahu’s proponents either.

The Israeli prime minister does not have a real party behind him. The Likud Party is controlled by radical Knesset member Danny Danon who served as deputy defense minister until July 15 when Netanyahu dismissed him during Operation Protective Edge. Minister of Transportation Yisrael Katz, who has his own independent agenda, controls the party’s other institutes. Netanyahu is currently a leader without a party, facing a bleak political horizon given that his historic alliance with the ultra-Orthodox was dissolved (because of Lapid), and that they have vowed to do anything to topple him.

It has gotten to the point where Lapid’s associates are talking, albeit quietly, about the possibility of a rotation government. “If the two parties are identical in size,” a senior official associated with Lapid told me, “and if Liberman, who once teamed up with Bibi, now sides with Lapid, then there’s no reason why Lapid cannot demand to have a rotation government with Netanyahu.”

The very fact that such a possibility is being entertained, whereby Netanyahu will have to let Lapid serve as prime minister for 1½ years at the end of the term, makes the prime minister break into a particularly cold sweat. But there are even more nightmarish and gloomy scenarios: There are constant whispers across the political establishment about the possibility of deposing Netanyahu already over the next few months.

Technically speaking, this is not impossible. All you need to do is to hook up the Labor Party, Justice Minister Tzipi Livni and her Hatnua Party and the ultra-Orthodox with the Lapid-Liberman alliance, submit a constructive no-confidence motion — which topples the sitting government and establishes a new one in its stead — and take the plunge. So what’s stopping this scenario from taking place? If Lapid were to join a coalition with the ultra-Orthodox after all that he has said and done to them, he would lose his public credibility.

Will Netanyahu be unseated in the coming months? Although this is hard to believe, it is nevertheless possible. Does he have a significant rival right now to vie for the premiership? Probably not. But as was explained earlier, this does not mean that he is strong. Netanyahu is a weak, petrified and a listless leader. That’s the truth, Mr. Obama.

Our problem is that there is no alternative to replace Netanyahu. A peace arrangement will not be brokered by the two sides on their own because they are both in the same situation, by and large. What we need here is a serious adult from the outside who will put things in order. Yet it seems to me, Mr. Obama, that you, too, are rather weak right now.