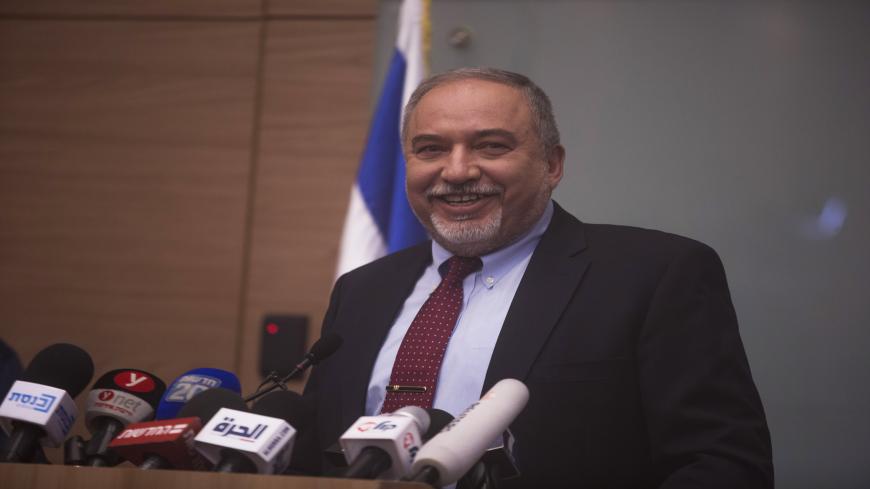 Three Israeli politicians are competing to replace Prime Minister Benjamin Netanyahu. They are Yair Lapid, head of the centrist Yesh Atid party that is polling in second place after Netanyahu’s Likud; Gideon Saar, chair of the New Hope party that he formed recently as a right-wing alternative to the Likud party he quit; and Yamina party leader Naftali Bennett, who insists Netanyahu must be replaced but refuses to promise that he will not join a Netanyahu-led government.

These three contenders know they will have to cooperate at the moment of truth, to constitute a blocking bloc against Netanyahu. Still, no one came up with a formula to untangle the growing complexities and contradicting ambitions ahead of the March 23 elections. That is, until Avigdor Liberman, head of the Yisrael Beitenu party, delivered a simple proposal. Whichever one of us gets the most votes, he told the others, will be the candidate of the anti-Netanyahu bloc to form Israel’s next government.

Long after he was relegated to the status of a political wreck, with his party labeled a total loss, Liberman is now emerging as the operations officer of the “anyone-but-Netanyahu” camp, the linchpin and responsible adult of the political center. No one believed that the veteran hawk, whose constituency was initially based solely on immigrants from the former Soviet Union, could break the glass ceiling and conquer new territory. In the 2015 elections, his party barely made it over the electoral threshold, garnering the equivalent of five Knesset seats. However, Liberman has managed to inject new blood into his waning constituency of immigrants that is aging and dying off.

Those responsible to a large extent for the regeneration of his base are the ultra-Orthodox parties. Liberman is now riding a tsunami of hatred toward the two ultra-Orthodox parties over their interference in many aspects of daily life, tight control of budgets and top government positions, and monopoly over too many issues that shape Israeli society.

This voter pool, believed to be worth about 15 Knesset seats, was originally the bandwagon of the anti-clerical, centrist Shinui party led by Yair Lapid’s father, Yosef (Tommy) Lapid in its heyday in the early years of the 21st century. Liberman is the new Tommy Lapid — the savior of nonreligious Israelis, the scourge of the ultra-Orthodox, the man instrumental in helping Netanyahu build his brand in the 1990s and now sworn to crush him.

Liberman is not featuring in the political arena as a prime ministerial candidate, and he does not mind, for now. On the contrary. He prefers his modest polling figures while he operates under the radar, planning an election day surprise. His support is growing slowly but steadily, with polls putting it at eight to nine Knesset seats. He is aiming for a two-digit outcome, which would place him in the same ballpark as Bennett and Saar, who are currently running neck and neck at 11 to 12 seats each, and below Lapid who is flirting with a 20-seat showing in the polls (even as he tries to avoid standing out so as not to provide Netanyahu with too obvious a target). If Liberman crosses the single-digit Rubicon, all his options are open. If there is no clear winner among the four, and they end up in a power-sharing deal with each serving for a short stint as prime minister, he will stand up and be counted.

Nonetheless, Liberman’s paramount mission is to unseat Netanyahu, even if it means setting aside his prime ministerial ambitions. As far as he is concerned, becoming prime minister is an option, not an obsession, he tells people who ask about his game plan.

But removing Netanyahu from power is still a very distant prospect. The prime minister is conducting an intense campaign, as only he knows how, fighting for every vote and investing boundless energy in the unprecedented and unbelievable strategy of wooing the Arab vote.

As for Liberman, he has already changed the makeup of his voter base. Secular Israelis, liberal residents of Tel Aviv and even center-left voters now view him as an almost legitimate choice, his hawkish political views notwithstanding. He is feeding off the tremendous energy of the anti-Netanyahu forces, like a shark smelling blood, and at the same time storming the bastions of anti-clerical sentiment.

While most of the other parties running for the Knesset are engaged in ruling out partnerships with the others — Bennett has already announced that he would never join a government led by Lapid or Saar, Saar has pledged not to join a Lapid-led government, and so on — Liberman is the only one who has declared a sweeping boycott of the ultra-Orthodox parties. This is his main growth engine. The behavior of the ultra-Orthodox communities throughout the coronavirus crisis has generated tremendous public anger toward this minority, estimated at 11% of the population. Footage showing many of them thumbing their nose at state-imposed restrictions and adhering solely to the dictates of their rabbis has generated great frustration that is seeking an outlet. Liberman is the willing receptacle of this sentiment.

Liberman, however, may find himself having no choice but to join a government with the ultra-Orthodox, who account for at least 15 Knesset seats and may be essential to securing an anti-Netanyahu Knesset majority. Liberman was the biggest ally of these parties in the 1990s. He and Aryeh Deri of the ultra-Orthodox Shas party, representing Jews who immigrated from Arab states, enjoyed vast power during Netanyahu’s first term as prime minister in the 1990s. Liberman subsequently formed and maintained a long-standing alliance with the ultra-Orthodox representatives of Ashkenazi (European-origin) Jews, too.

However, in recent years, this alliance has turned into vicious rivalry, the friendship into hatred. Liberman, as mentioned, has sworn never to join a government coalition with the ultra-Orthodox, insisting that there is no point in replacing Netanyahu while leaving the ultra-Orthodox in all the key positions that allow them to continue controlling the state.

But what happens if there is no other way to square the circle and form a government without Netanyahu and his Likud party? What would Liberman prefer, violating his pledge to boycott the ultra-Orthodox or reneging on a previous pledge to boycott the Arab Knesset members? Liberman has declared that he would never join a government that relies on Arab party support for a Knesset majority. Right now, no one can answer this question, but one thing is certain: Liberman will do whatever he can to yank the Netanyahu family out of the official residence on Jerusalem’s Balfour Street, whatever the cost.