In the March 23 elections, Prime Minister Benjamin Netanyahu is the clear favorite — but against whom? 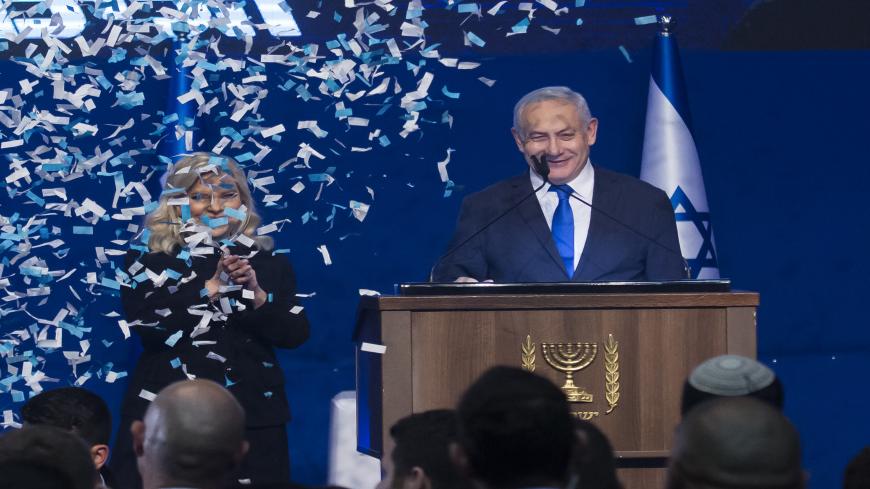 For several weeks now, the ruling Likud party led by Prime Minister Benjamin Netanyahu has been stagnating in the polls. Although the Likud is still by far the biggest party with the widest lead in the polls, and the public persistently pegs Netanyahu as the candidate best suited to be prime minister, his victory in the March 23 elections is far from assured.

Stranger still is the fact that not a single poll points to a clear winner who could replace Israel’s longest-serving premier. At least three candidates stand a chance, at least theoretically: opposition chair and head of the Yesh Atid party Yair Lapid; former Likud stalwart Gideon Saar, who recently formed the New Hope party; and former Defense Minister and Chair of the Yamina party Naftali Bennett.

One other name not usually mentioned in this regard but who could under certain circumstances hit the jackpot is Avigdor Liberman, chair of the Yisrael Beitenu party, who appointed himself two years ago to lead the charge against Netanyahu. While Liberman is polling in the single digits — an average of 7 seats in the 120-seat Knesset — many signs point to a quiet, steady rise in support for the former defense and foreign minister. The seething public anger against the ultra-Orthodox at their seeming disregard for the state-imposed anti-coronavirus restrictions could turn the anti-clerical hawk into an election surprise.

The absence of a clear-cut Netanyahu challenger for leadership of the state is the anomaly of the March 2021 elections. Netanyahu is the clear favorite — but against whom? In other words, once the election results are in — three weeks from now — Israel could find itself facing an even more chaotic situation than it did after each of its three inconclusive elections in less than two years. Even if Netanyahu fails to nail down control of the 61 Knesset seats without which he cannot form a government, the results are unlikely to determine a clear successor.

The prospects of an obvious successor emerging from the anti-Netanyahu bloc are also slim given its fragmented nature and multiple contenders. However, its four key figures — Lapid, Bennett, Saar and Liberman — could join forces and let one of them try his hand at forming Israel’s next government rather than letting Netanyahu do so and remain in office as a transition prime minister.

In such a case, Liberman, the most veteran politician among the four, could become the compromise candidate for premiership. The least-threatening candidate for the others. He is the only one amid the four who could pledge not to compete against the three others later on, in a next election.

At 62, Liberman is the oldest of the four and the most experienced, having served as a member of almost every government in the past 20 years. He could step in for a pre-determined transition period of a year or more in order to remove Netanyahu from office and politics. Such a transition would allow him to push through term-limit legislation, which would also block Netanyahu’s return. Saar, Bennett and Lapid would hold the top ministerial positions — finance, foreign affairs and defense — in a Liberman-led government, preventing turf wars within the “anyone but Netanyahu” bloc and avoiding a convoluted power-sharing government structure.

Liberman is operating under the radar. He has avoided declaring himself a candidate for the premiership even though he made no bones about such ambitions in the past. Bennett and Saar, on the other hand, have positioned themselves as Netanyahu’s successors to lead the political right, although their performance in the polls — in the very low two-digits — is incommensurate with their ambitions.

At this stage, the waters in the anti-Netanyahu bloc are relatively calm, although each of the contenders should logically be jockeying for as much voter support as possible. Their strange behavior stems from their realization that none of the parties they lead is anywhere near the Likud’s showing and any attempt to catch up with it is doomed to failure. They know that unseating Netanyahu requires thinking outside the box and they will do all they can to remove him and his family from their bastion on Jerusalem’s Balfour Street, the prime minister’s official residence that has become synonymous with Netanyahu’s long rule.

Saar, Bennet and Liberman are coordinating their strategies at some levels. Recent reports pointed to a Liberman-Lapid axis, which continues to be active. The two parties have also avoided mutual attacks even though they are vying for the same voter pool that opposes the ultra-Orthodox parties and religious coercion.

Lapid is also conducting a strange campaign, especially given the fact that polling second behind the Likud, he should be going head-to-head with Netanyahu. His centrist Yesh Atid party has been gaining steady momentum in recent weeks, nearing the 20-seat mark. In this week’s poll results, published March 1, Netanyahu’s Likud came in at 27-28 seats to Yesh Atid’s 19.

So why has Lapid not declared himself a candidate for prime minister and has campaigned instead for a “sane government” to replace the current one? Because that is exactly what Netanyahu wants, and this time, Lapid has no intention of falling into that trap.

In-depth polls commissioned by Yesh Atid indicate that a head-on clash with Netanyahu does not serve Lapid well because it highlights his relative inexperience. Lapid is therefore conducting a non-campaign. He hardly gives interviews and does not challenge Netanyahu directly.

Netanyahu, for his part, is doing his best to provoke Lapid and drag him into the arena, so far unsuccessfully so. Earlier this week, on March 2, Netanyahu posted a clip on social media, in which he wonders out loud where Lapid has gone. “Tell me, has anyone seen Yair Lapid?” he asks, his searching eyes scanning the walls and ceiling, after which he turns to the camera with a sly look and answers, “Lapid is hiding. He doesn’t want you [the audience] to know that the only question in these elections is who will be the next prime minister.” He then explains that Lapid does not want the truth to come out because voters would realize his ineptitude. “You will be determining who continues to lead Israel, to bring millions of additional vaccines,” Netanyahu tells voters. “Who will bring additional historic peace agreements? Who will continue preventing Iran from developing a nuclear bomb? And who will send our economy surging to new heights? Myself or Lapid?”

Netanyahu’s claims are, to put it mildly, misleading. Lapid, Saar and Bennett will do everything in their power to remove him from office in the coming elections; unless he somehow comes up with the 61-seat majority he needs (which he can only achieve if Bennett supports him), each of them could find himself moving into the residence on Balfour Street.