The merger between Blue and White and New Hope might offer Benny Gantz a shot at becoming prime minister after the Nov. 1 elections. 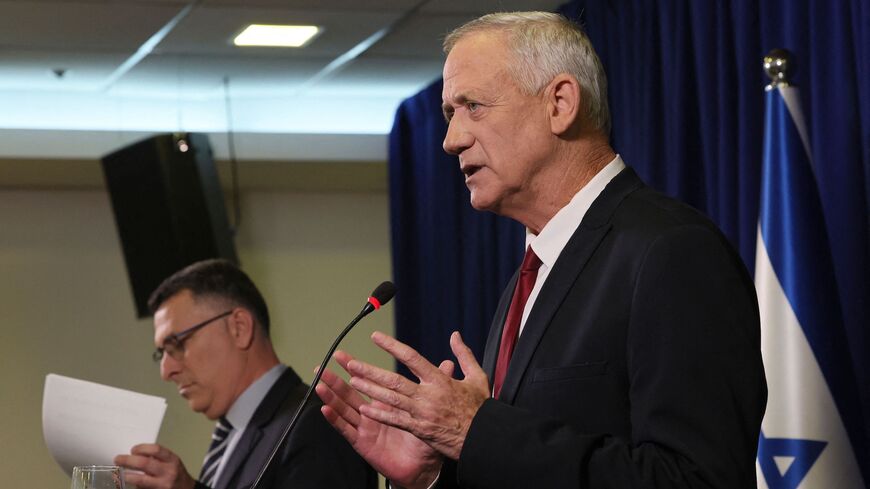 The unsurprising July 10 announcement of the merger between the Blue and White party of Defense Minister Benny Gantz and the New Hope party of Justice Minister Gideon Saar ahead of the Nov. 1 elections has not changed the balance of power between opposition leader Benjamin Netanyahu and his opponents, but it does redraw the lines of the bitter battle being waged over the identity of the Jewish State.

The merger takes Gantz from head of a party with single-digit polling figures into a strong candidate for the country’s premiership.

This new alliance will turn the election from a two-pronged race between opposition head Benjamin Netanyahu and caretaker Prime Minister Yair Lapid into a trilateral competition. Now, rather than two blocs running for the Knesset — Netanyahu’s Likud, the ultra-Orthodox parties and the radical right against left-center-Arab parties — the new constellation pits the Netanyahu bloc against a center-left-Arab bloc and a security-oriented centrist one.

This could be good news for Netanyahu’s opponents.

The alliance allays the biggest concern of the anti-Netanyahu bloc: that Saar’s party would not gain sufficient votes to get into the next Knesset and thus shrink the bloc of Netanyahu opponents.

Saar split off from the Likud to form New Hope, which won six Knesset seats in the 2021 elections, three of them from former Likud voters. He is perceived as the man who brought down Netanyahu, Israel’s longest serving prime minister. The latest polls give his party a worrying tally of four or five seats, indicating it may not make it over the electoral threshold. By joining Gantz, Saar has assured himself and at least some of his party members seats in the next Knesset. A poll immediately after the merger announcement gave their joint ticket 14 seats, the same number of seats held by the two parties in the recently dissolved Knesset.

Gantz has thus removed the immediate threat hanging over Saar’s head. What does he get out of the deal?

This move could hand him the premiership. Gantz knows that former Prime Minister Naftali Bennett would need a double-digit showing in the elections to make him a legitimate choice for prime minister. The link with Saar provides Gantz, a former army chief who entered politics in 2018, with a new voter pool on the political right. With a convincing campaign and a bit of luck, they could make a 20-seat win.

Even without such a victory and a lower figure in the teens, their merger still changes the game. Gantz could still become prime minister under certain circumstances by virtue of his electoral performance rather than as a result of the job-sharing deal he concocted with Netanyahu, which made him alternate prime minister for a brief stint.

As is often the case with Israeli politicians, Gantz’s prospects depend to a large degree on the two ultra-Orthodox parties. Both are currently allied with Netanyahu but have already made it clear that if the Nov. 1 election results do not provide the Netanyahu bloc with a 61-seat majority, they would no longer feel bound to the alliance.

The ultra-Orthodox parties remained loyal to Netanyahu through the four election rounds since 2019 that ended inconclusively, only to find themselves in the opposition when the Bennett-Lapid government was installed in June 2021, deprived of the perks of power and its budgetary cash cow. They are unlikely to agree to a longer sentence on the opposition benches for the sake of Netanyahu’s personal political survival.

The logical conclusion of all these machinations and calculations is that unless Netanyahu and his bloc achieve the 61-seat majority that has eluded them for over three years, Gantz is most likely to become Israel’s next prime minister — either for a full term or as the first in a rotation deal.

And who would be Gantz’s alternate prime minister? Netanyahu is probably the inevitable choice unless the ultra-Orthodox can be convinced to join a government with Lapid. They might agree to join the government under Gantz and walk out once Lapid takes over but continue to support the coalition in Knesset votes. One other scenario would see Netanyahu’s corruption trial ending within the two years that Gantz is prime minister. A criminal conviction would end the Netanyahu era, while a not-guilty verdict would bring him back in full force.

Would Gantz, given no other choice, agree to a rotation deal with Netanyahu after Netanyahu reneged on their previous rotation deal immediately after it was signed? Right now, both Gantz and Saar are adamant that this cannot happen, vowing never to join a government with him at the helm. But facing a dilemma between continued political chaos and a sixth election and a stable government with a restrained Netanyahu, both will come under heavy pressure to change their minds.

One additional component in these complex equations is whether former army chief Lt. Gen. (ret.) Gadi Eizenkot will take the plunge into politics. He is likely to announce his decision in August. Eizenkot was initially thought to be planning a run with Lapid as his No. 2. But those contacts appear to have cooled, and a Gantz-Saar union could also provide him with a potential platform. While a political run would not shake up the political system, an Eizenkot candidacy could help crack the 61-seat ceiling by adding a seat or two to whatever party he joins.

Ultimately, despite all the speculation, Israel’s political map remains unchanged: Half the voters cannot stand Netanyahu while the other half cannot imagine life without him. To quote French writer Jean-Baptiste Alphonse Karr, the more things change, the more they remain the same.