According to exit polls, Prime Minister Benjamin Netanyahu might be able to establish a majority coalition if he gets Yamina leader Naftali Bennett to join him. 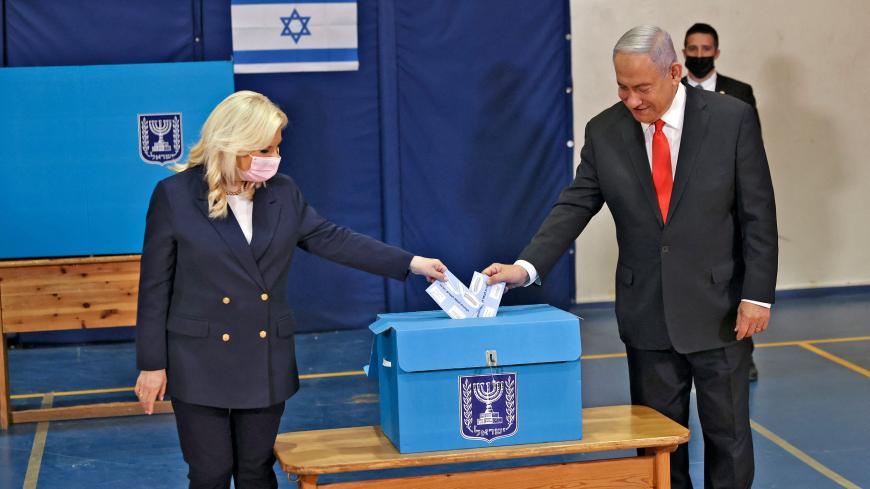 Israeli Prime Minister Benjamin Netanyahu and his wife, Sara, cast their ballots at a polling station in Jerusalem on March 23, 2021. - RONEN ZVULUN/POOL/AFP via Getty Images

An exit poll from Israel’s public broadcaster Kan published late Tuesday indicated that Prime Minister Benjamin Netanyahu’s bloc could win a slim majority of 61 Knesset seats. The exit poll accorded Netanyahu’s Likud 31 seats, while estimating that its main rival, Yair Lapid’s Yesh Atid, would get 18. Under this scenario, Netanyahu could, in theory, establish a majority coalition by partnering with the ultra-Orthodox Shas, the ultra-Orthodox Yahadut Hatorah, the national religious party of Bezalel Smotrich and the pro-settler Yamina party led by Naftali Bennett.

When it came to the "anyone-but-Netanyahu" camp, some surprises were registered as exit polls contradicted many of the public opinion polls published until March 19.

Blue and White, led by Defense Minister Benny Gantz, did so poorly in most recent preelection that analysts doubted whether the party could even pass the vote threshold to enter the Knesset. Now it is expected to win seven Knesset seats, three above the minimum of four seats under the threshold. The left-wing Meretz party also exceeded expectations and is expected to win six Knesset seats, as is the New Hope party led by Gideon Saar, a former Likud member.

On the other hand, the Arab party Raam, which split from the Arab Joint List, did not pass the Knesset-entry threshold. Here also results differ from the last public opinion polls. Mansour Abbas had run separately from the Joint List on the ticket of cooperating with the government — including a Netanyahu-led one — to garner greater budget funding for the Arab public.

Channel 13's exit poll accords the Likud 33 Knesset seats and only 16 to Yesh Atid. Still, according to this poll as well, Netanyahu must get Yamina and Naftali Bennett on his side to reach the minimum required majority of 61 Knesset seats.

During the election campaign, Bennett coordinated with some leaders within the anti-Netanyahu bloc, but refused to exclude sitting in a Netanyahu-led government. Analysts now estimate that Netanyahu would try to form a government as soon as possible. Unnamed associates of Bennett told Israeli press they were "not in Netanyahu's pocket," claiming that it was not a foregone conclusion that Yamina would join a Netanyahu government.

After polling stations closed, the counting of votes  started across the country. Results were expected to come in throughout the night, with final results either March 24 or 25. Legally, final results must be handed in by March 31. After that, President Reuven Rivlin must decide who has the best chances of forming a majority coalition, tasking this person with the mission of composing a new government.