Over the years, Prime Minister Benjamin Netanyahu managed to drive away those who threatened his position, such as Ministers Roni Milo, Moshe Kahlon and now also Likud’s favorite Gideon Saar, leaving the party empty of political stars. 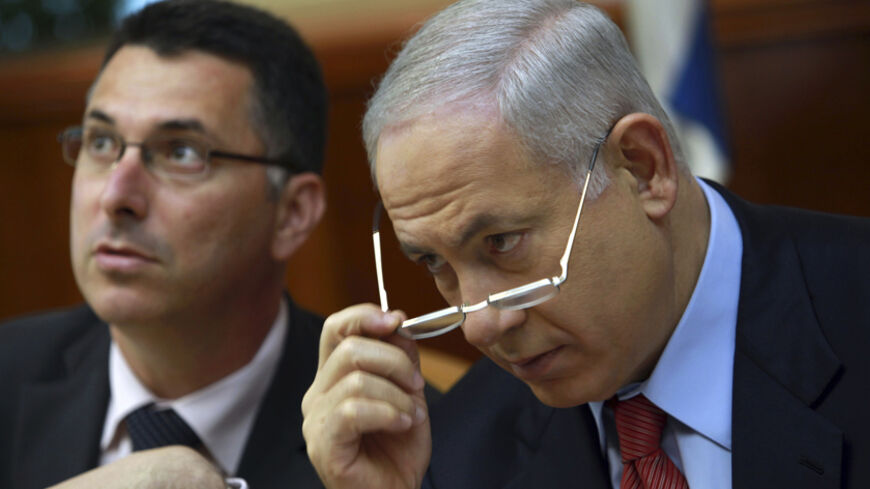 In Israeli terms, it was considered something of a political earthquake. On Sept. 17, the ruling party lost its most prominent politician, the only man who dared challenge Prime Minister Benjamin Netanyahu, the person considered by many in Israel to be the one great hope of the post-Bibi (Netanyahu) era. Interior Minister Gideon Saar was a former education minister and Cabinet secretary in both the first Netanyahu and the first Sharon governments. Now he surprised everyone by announcing that he was leaving political life.

“I have decided to take a time-out from political life,” he said. He never once mentioned Netanyahu’s name in his goodbye speech, which he delivered at the traditional New Year’s toast for his supporters. Yet, this name not mentioned could be heard loud and clear in the whispers making rounds among his supporters. Saar was resigning because of Netanyahu, and only because of Netanyahu. And he wasn’t the first to do so.

Over the years, Netanyahu has managed to chase many of the best people away from politics, the Likud Party or both. Former Minister David Levy left because of him. Former Minister Dan Meridor left during his first term, also because of him. There was former Minister Benny Begin, the popular Defense Minister Yitzhak Mordechai, former Minister Roni Milo and more recently the very popular Minister Moshe Kahlon. They all reached the same conclusion: they could no longer sit with Netanyahu. It was taking a toll on their health. So they just threw up their hands in frustration and left. Each and every one of them knows, for example, exactly what US President Barack Obama is going through, having to work with Netanyahu. None of them believe a single word that their prime minister says. They have no faith in him whatsoever. They all reached the same conclusion that they would rather die politically than live that way. Some of them resigned completely from politics, and some only left the Likud. Some (like Saar) resigned from the government but remained in the Likud Party. Regardless, they are all gone.

Israel’s ruling party has been left without any stars, except for Netanyahu himself. Now Communication Minister Gilad Erdan, the most popular Cabinet member after Saar, is also considering his next move. In conversations behind closed doors, he sounds just like Saar. Erdan has a promise from Foreign Minister Avigdor Liberman (he was Liberman’s personal aide, when he served as director-general of the prime minister’s office during Netanyahu’s first term) that he would be appointed Israel’s ambassador to the United Nations in a few weeks. Erdan also reached the decision that he has had enough of serving as a minister under Netanyahu, at least at this stage. Right now, however, it is not at all certain that this promise will be fulfilled. At this point, Liberman has no interest in doing Erdan any favors, since Saar’s resignation means that a new Knesset member from Liberman’s faction will replace him, costing Netanyahu one Knesset member. If Erdan also leaves the Knesset now, the next person on the joint Likud-Yisrael Beitenu list would come from the Likud Party, so it’s no longer that important to Liberman to have Erdan leave.

Saar’s departure brings the Likud down from 19 seats to 18. As noted, the next in line in the joint list is a member of Liberman’s Yisrael Beitenu. Since the merger of Liberman and Netanyahu’s parties was voided, they are now two separate parties. This makes Finance Minister Yair Lapid’s Yesh Atid faction the largest party in the current Knesset, with a total of 19 seats. That, in turn, provides momentum and support for all those applying pressure on Lapid to bring Netanyahu down now and form an alternative government to replace him. Lapid could do it, theoretically at least. It could be done if Liberman joins Lapid and if the ultra-Orthodox parties reconcile with him. But the chances of that actually happening are zero. Lapid has yet to accumulate the operating time demanded of a prime minister in Israel. Nor is it at all certain that Liberman, or Isaac Herzog, chairman of the opposition, for that matter, would agree to have Lapid leapfrog over them and grant him legitimacy as prime minister. For Herzog at least, that would be a political death warrant. Why does he need this?

That’s the problem with Israel’s political system. Everything is so personal here. Ego plays the lead role. The system forces politicians to think of themselves first, and only then to worry about the country. The same thing happens in other countries, too. The Republicans have been making Obama’s life miserable for a very long time, but they don’t have the option of replacing him midterm, so their passions are more subdued. In Israel, the prime minister must be in constant survival mode, 24 hours a day, 7 days a week. Over the years, Netanyahu has become a veritable grandmaster in that particular domain. The problem is that he doesn’t do anything apart from that.

What will Gideon Saar do? He’ll rest, first and foremost. Then he’ll consider his next steps. All options are open to him. He can return to the Likud and run against Netanyahu in the next primaries. Saar might even have a real chance if Netanyahu keeps crashing in public opinion polls and gets himself tangled up in even more embarrassing situations. He can team up with Kahlon and join his new party, or he can join one of the new political structures in Israel that come into being in every election cycle. Even Liberman comes into consideration. Yes, all of Saar’s options are open. Meanwhile, however, he can breathe easier now. “That disgusting episode is over,” he said, according to an Al-Monitor political source, in a private conversation on Sept. 17. “I’ve learned that there is life after politics — that it’s possible to live like a human being. What I want to do now more than anything is go to the beach. I haven’t gone to the beach in years because of all the security guards, because of the paparazzi. It’s time to take a little rest.”

When speaking with all the people who left Netanyahu, in addition to all the political forces still surrounding him, there’s a feeling that the prime minister will soon be taking leave of his seat. But that’s not the impression left by the polls. The Israeli public neither likes nor supports Netanyahu, but they don’t see any alternative to him either, at least for now. Still, with Liberman, Kahlon, Lapid, Saar, the ultra-Orthodox parties and various other factors all swearing that they will make Netanyahu pay and that they will bring an end to his rule in the next elections, it looks to me like Netanyahu has a real reason to worry.