Finance Minister Avigdor Liberman, the longstanding nemesis of opposition leader Benjamin Netanyahu, has been accused on social media of a conspiracy to kill a police officer. 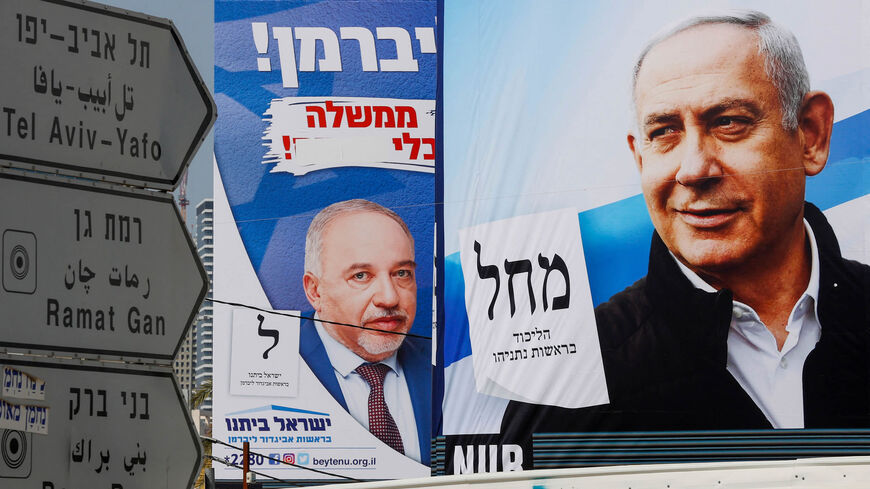 Almost everyone who has ever vowed to remove former Prime Minister Benjamin Netanyahu from power served him in one capacity or another over the years: members of his Cabinets, Knesset members of his Likud party, close aides, advisers and military officers under his command.

The list goes on and on. In the 1990s, when Netanyahu was consolidating his political power, there were Knesset members Ronnie Milo, Dan Meridor, Yitzhak Mordechai and Israel Defense Forces chief of staff, the late Amnon Lipkin Shahak. In more recent times, their names were Moshe Kahlon, Zeev Elkin, Gideon Saar, Benny Begin, Naftali Bennett, Ayelet Shaked — all ministers in his various governments and all having concluded at some point that then-Prime Minister Netanyahu was a danger to the State of Israel.

These two men go way back. Liberman was Netanyahu’s right hand even before the up-and-coming politician took control of the Likud and ultimately of the country in the 1996 elections. He was the closest confidant, most intimate partner and sole political operator in the young Netanyahu’s rise. Only people who have been so close can know each other so well, and the depth of their historical alliance is matched only by the bitterness of their contemporary enmity. Netanyahu and Liberman are locked in a heavyweight wrestling match. Only one will walk out of the arena on two.

Liberman dissolved his partnership with Netanyahu prior to the 1999 elections, which Netanyahu lost to Ehud Barak, and formed the Yisrael Beitenu party to garner the votes of hundreds of thousands of newly arrived Jewish immigrants from the former Soviet Union.

In the ensuing years, Liberman entered into various ad hoc alliances with his former patron in order to consolidate his own rise. But just after the 2019 elections, Liberman dropped his biggest bombshell, declaring that his party would not join any government led by Netanyahu. His move precipitated three election rounds over the next two years, none of which handed Netanyahu a decisive victory.

As Israel heads for its fifth election Nov. 1, the political arena is in chaos, torn between Netanyahu’s determined comeback stand and the equal determination of his enemies, chief among them Liberman, to deny him that achievement.

The higher the stakes, the more their personal animosity has grown. Netanyahu, and more so his family, have sworn to destroy Liberman. Liberman, for his part, has set aside all other plans to focus on one — sinking Netanyahu’s political career for good.

Liberman, whose rise to power was fueled by his pledge to expel Israel’s Arab citizens, did what no one — least of all himself — ever imagined he would do: He agreed to a coalition with an Arab party that enabled the June 2021 formation of a government without Netanyahu, for the first time in 12 years. At this rate, the staunchly anti-clerical Liberman may agree to a coalition with the ultra-Orthodox parties after the coming elections — anything to make Netanyahu go away.

The latest round was launched this week. A man named Yossi Kamisa, claiming he worked for Liberman 20 years ago, described in a Facebook post a detailed account alleging that Liberman had offered him $100,000 at the time to assassinate a senior police officer involved in a probe of corruption suspicions against Liberman.

The allegations, which would have done the Sopranos’ scriptwriters proud, are fueling the conspiracy theories associated over the years with Liberman. Liberman, for his part, has called Kamisa’s claims absurd, denied the man ever worked for him and claimed he is affiliated with the Likud and operating in Netanyahu’s service.

Nonetheless, the story has spread on social media, Kamisa has called on Liberman to undergo a lie detector test and Netanyahu’s fans are calling on police to launch an investigation.

Liberman tried to ignore this strange tale, but the social media age makes it impossible, especially two months prior to crucial elections. On Sept. 1, he issued a detailed denial of the claims. This evening, Kamisa is scheduled to be interviewed on a primetime news show by a journalist identified with Netanyahu. The story appears to be spinning out of control, taking on a life of its own.

Netanyahu has a clear goal. He needs two additional Knesset seats to provide him with the 61-seat majority for his return to the prime minister’s office. He believes this is the only way he can suspend the legal proceedings against him and tighten his hold on the State of Israel, which presumes to be the only democracy in the Middle East.

Netanyahu’s prospects of achieving the coveted 61 are unclear. Most polls show him and his ultra-right and ultra-Orthodox allies with 58-59 seats, indicating that the Nov. 1 balloting will not break the persistent tie of the previous four elections. One of Israel’s leading pollsters — Mano Geva — said recently that the two opposing blocs are locked in place and only the voter turnout rate could shift seats from one bloc to the other.

But Netanyahu is not leaving anything to chance. His latest game plan calls for preventing Liberman’s party from gaining sufficient votes to make it into the next Knesset.

Liberman’s fortunes rose this week with the successful completion of wage negotiations with a teacher’s union that threatened to derail the start of the school year. However, his successful performance in the Finance Ministry over the past year has not done much for his party, which has been polling persistently at five Knesset seats, dangerously close to the electoral threshold of 3.25% (equal to four Knesset seats).

If Kamisa’s allegation erode his party’s standing further, Liberman may find himself out of the Knesset and the votes of his supporters would not be counted. Such a scenario almost guarantees Netanyahu the 61-seat majority he needs. As far as he is concerned, this tactic is worth a try.

In fact, any tactic seems worth a try in Netanyahu’s desperate bid to escape conviction by the Jerusalem District Court. That includes his supporters’ persistent efforts, likely inspired by Netanyahu, to tar his rivals with the same brush of corruption, suggesting everyone is rotten, not just the former prime minister.

Such was the case with the mysterious allegation on the eve of the 2019 elections of an Iranian hack of the phone of Defense Minister Benny Gantz, Netanyahu’s chief rival at the time, where compromising photos were allegedly found. Next in the firing line was Gideon Saar, a Likud stalwart who turned on Netanyahu and became the subject of various rumors.

Will the anti-Liberman campaign succeed? Hard to say. The answer may be almost two months away.