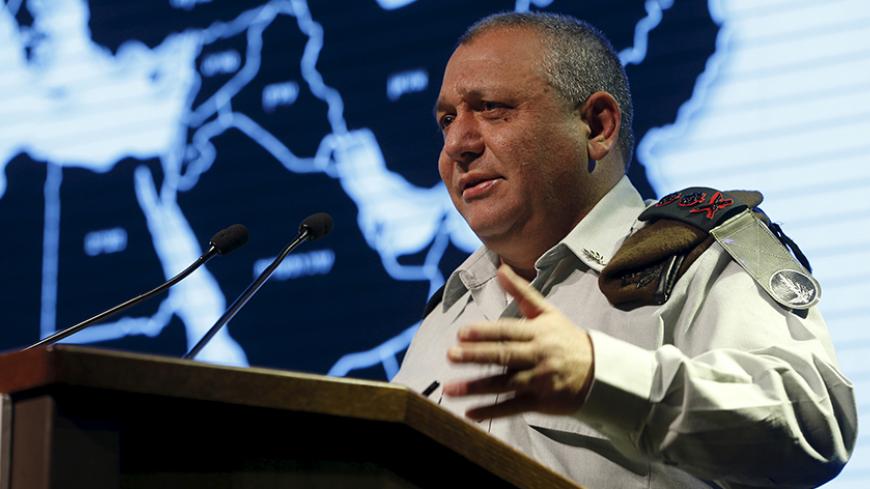 It was February 1988, about two months after the first intifada erupted. Israel Defense Forces (IDF) troops in Gaza and the West Bank were confronted by complicated and violent encounters with Palestinian civilians. Chief of Staff Dan Shomron wrote a letter to IDF commanding officers reminding them to maintain “the principles of law, ethics, and discipline.” He also wrote that he expected the troops to display “assertiveness and decisiveness, along with self-control, restraint and sensitivity.” He concluded by emphasizing, “Force must not be used as a means of punishment, nor should it be used once the objective has been achieved. … The population must not be abused, shamed or humiliated, and no intentional damage should be caused to their property.”

Two months later, Shomron stunned politicians by declaring that the intifada could not be quelled by military means alone. His comments evoked harsh criticism from politicians on the right, but he nevertheless continued to state his view of the situation. In one notable instance, Shomron rejected a demand that the chief of the Central Command, Maj. Gen. Amram Mitzna, be removed from his post for telling the Cabinet that the intifada could not be reined in by force. The person who demanded that Mitzna be fired was none other than Ariel Sharon, industry and trade minister and a senior member of Likud. Shomron stood up and said, “That’s my opinion too. Fire me if you want.” While this particular incident was unusually intense, Shomron came under regular fire from politicians back then, during a national unity government. Neither Prime Minister Yitzhak Shamir from Likud nor Defense Minister Yitzhak Rabin from the Labor Party stood out for having come to his defense.

Almost three decades later, what is being called the third intifada, or the “young people’s intifada,” is raging. Within the corridors of power, Chief of Staff Gadi Eizenkot finds himself caught in the middle of a similar political tempest, with politicians on the right trying to gain political advantage by attacking an ostensibly moderate statement he made. Like Shomron before him, Eizenkot is leading the military through a complicated conflict with a civilian population. It is, in fact, the kind of conflict that raises serious questions of ethics and values on an almost daily basis. The similarity ends there, however. While Shomron was being stubborn and bold in confronting the political class and adopted a position with clear political ramifications, Eizenkot’s allegedly offensive comment was only stating the obvious. All he did was expand on the reasoning behind orders for opening fire when soldiers confront civilians. Simply put, if there are other ways to resolve a confrontation, it is best to avoid opening fire.

Even the occasion for his remarks was completely innocuous — during a meeting Feb. 17 with high school students in the town of Bat Yam. Yuval Pollack, a junior, had asked whether the rules for opening fire were sufficiently clear and whether they might put the lives of soldiers at risk. Eizenkot responded at length, stating in part, “The IDF cannot speak in slogans, such as 'if someone comes to kill you, arise to kill them first’ [Talmud, tractate Berakhot 58a]. … There have been cases in which a 13-year-old girl with scissors or a knife got into a confrontation with soldiers. I don't want a soldier to empty a magazine on a girl with scissors.”

Several Knesset members and ministers, mainly from HaBayit HaYehudi, turned the chief of staff’s remarks into fuel for the fire. In media interviews and on Facebook pages, they treated what Eizenkot said to the students as if it were heresy. Agriculture Minister Uri Ariel and Knesset members Motti Yogev, a colonel in the reserves, and Betzalel Smotrich explained to Eizenkot why he was mistaken. Transportation and Intelligence Minister Yisrael Katz went so far as to question Eizenkot’s judgment. After an attack by Palestinians on Feb. 18, Katz wrote on his Facebook page, “Two Israelis were injured in Binyamin [on the West Bank] an hour ago, after they were stabbed by two 14-year-olds. The terrorists were captured and are still alive. While I respect and admire the chief of staff, I hope that his comments about automatically opening fire on minors were not misunderstood, causing respondents to hesitate and putting people’s lives at risk."

The attacks on Eizenkot, who was simply explaining the standard procedure for opening fire, reflect the populist approach being taken by right-wing Israeli politicians eager to win the support of their constituents. They know how frustrated their constituents are about the ongoing wave of terror and the ineffectiveness their own right-wing government has exhibited in its efforts to curb the violence. For them, Eizenkot is an easy target because his position precludes him from participating in the debate. True, the chief of staff received the backing of Defense Minister Moshe Ya’alon and Education Minister Naftali Bennett, and that's a good thing. Nevertheless, it would have been even better had his remarks not been turned into the focus of a public debate. After all, he didn’t say anything new or even controversial. Using the same criterion, it would probably be safe to assume that if Eizenkot had sent a letter to the IDF modeled after Shomron’s letter of three decades ago, politicians like Katz and Smotrich would have demanded that he be court-martialed for treason.

Quite a few chiefs of staff have been at the center of political tempests over the years. Nevertheless, Eizenkot is the first to spark such a firestorm over a statement as banal as the one he made. Ya’alon had came under serious fire when he served as chief of staff, when he was thought to oppose Prime Minister Ariel Sharon’s 2005 Gaza disengagement. During a 2004 visit to the Erez Crossing, just months before the plan's implementation, Ya’alon told journalists, “The connection between an increase in terrorist attacks and talk of a withdrawal should not be discounted.” He repeated his position on other occasions, and as a result, his term was not extended. In contrast, Ehud Barak, who served as chief of staff during the Oslo Accord, emerged unscathed after saying of the agreement, “This deal is as full of holes as Swiss cheese.”

Since being appointed chief of staff in February 2015, Eizenkot has managed to upset politicians on the right, especially those from HaBayit HaYehudi, on more than one occasion. When he decided to strip the Military Rabbinate of some of its authority, Yogev attacked him, claiming, “These attempts to damage the Military Rabbinate’s authority to connect soldiers to the Jewish people’s values are damaging to the IDF’s strength and fighting spirit, and to the security of Israel.” Later, Eizenkot reprimanded the chief military chaplain, Rabbi Rafi Peretz, after discovering that he had awarded special payment benefits to officers in the Military Rabbinate without justification. Now, after Eizenkot's talk about the rules of engagement, Knesset members from HaBayit HaYehudi have marked him as problematic.

As usual, Prime Minister Benjamin Netanyahu was late entering the fray. It was only at the Feb. 21 Cabinet meeting, more than three days after the incident flared, that he offered his support to Eizenkot, who happened to be in attendance. Yet, it was limited to only a few brief comments. There was no reprimand of Katz or other members of HaBayit HaYehudi for the nonsense they had spewed. Like them, Netanyahu’s main considerations are political. He wants to benefit from what happened, even if it is at the expense of the chief of staff. Netanyahu is fully aware of how frustrated the public, especially on the right, is about the ongoing wave of terror and is therefore afraid to be seen as being too moderate. On the other hand, after three days of hearing how he had abandoned his chief of staff, Netanyahu decided that he had no choice. His affected statement of support truly reflects the spirit of the times.