Why Israeli politicians are turning against the IDF 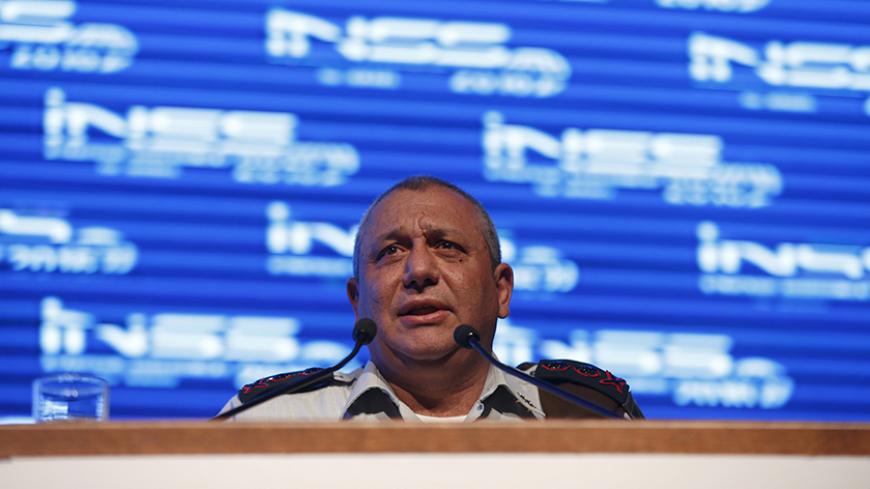 Chief of Staff Lt. Gen. Gadi Eizenkot is an experienced officer with a long list of achievements under his belt. Nevertheless, on Feb. 17, he found himself caught in a political crossfire. It happened soon after he gave a talk to a group of high school students in the town of Bat Yam. When asked about the Israel Defense Forces’ (IDF) procedures for opening fire on assailants, given the wave of terrorism that has been overwhelming Israel for the past few months, Eizenkot said, “Every IDF force out on a mission receives beforehand rules of engagement. The IDF cannot speak in slogans, such as 'if someone comes to kill you, arise to kill them first’ [Talmud, tractate Berakhot 58a]. … There have been cases in which a 13-year-old girl with scissors or a knife got into a confrontation with soldiers. I don't want a soldier to empty a magazine on a girl with scissors.” The chief of staff emphasized that according to existing orders, soldiers are entitled to use force to eliminate threats.

The right wing of the political spectrum immediately attacked Eizenkot for this. The first to lash out was far-right Knesset member Betzalel Smotrich (HaBayit HaYehudi), followed by Deputy Foreign Minister Tzipi Hotovely (Likud). Next came a statement from Minister of Transportation and Intelligence Yisrael Katz (Likud). Then Minister of Internal Affairs Gilad Erdan (Likud) made some comments, which were interpreted as criticism of the chief of staff.

In Israel, the chief of staff is almost always part of the consensus. In general, politicians tend to avoid public clashes with the most esteemed commander of the IDF. This time, however, there was a crack even in that paradigm. Over the past few years, the Israeli electorate has been veering steadily to the right. The political arena has been shifting rightward even faster, ahead of the electorate. Still holding the center is the IDF, its senior officers and the other heads of the security apparatus. Freed from voter intimidation and populist motives, Israel’s top defense officials continue to stick to the facts and maintain their composure. Having noticed this lacuna, politicians are becoming less wary of the esteem traditionally afforded to senior officers. As we have already seen this week, they have no qualms about lashing out at the most respected officers, including even the chief of staff, just to score points with an ever-growing right-wing electorate.

As a result of this firestorm, Channel 10 News published the results of a survey on Feb. 21 that found that most Jewish respondents believed that the chief of staff’s remarks were misguided.

The issue rose to the forefront of the public agenda and stayed there for several days. Over the past few months, young Palestinians — some of them boys and girls in their teens — have attacked Israeli civilians, soldiers and policemen with knives. Some 30 Israelis — as well as a foreign resident from Eritrea and a Palestinian from Hebron — have already been killed in this wave of terrorism, as have over 200 Palestinian terrorists.

The right wing of the Israeli political spectrum supports the approach that any Palestinian who attacks an Israeli with a knife or some other weapon effectively deserves to die, and that everything should be done to take him or her out. They claim that this is the only way to establish a deterrent and stop the current wave of terrorism. The center and left of the political spectrum think differently.

Excessive force was used on more than one occasion to stop these young Palestinians. When two Palestinian girls used scissors to attack Israelis in Jerusalem in November 2015, they were brought down with heavy fire from close range. The impression at the scene was that they could have been stopped easily without the use of force. There was also the case of an Israeli Arab woman, who pulled out a knife in front of a group of police officers in the northern town of Afula in October 2015; she was also shot at close range. Then too, the incident could have probably ended differently.

Nevertheless, it is hard to bring a case against Israeli citizens or security forces, who are expected to use discretion under difficult circumstances of stress and anxiety. With 32 victims already dead, no one is willing to take a risk and show restraint when dealing with knife-wielding assailants. On the other hand, the IDF and Shin Bet both realize that images of people firing at young Palestinians at close range only serve to incite terrorism, and that the funeral of every one of these casualties leads to three or four copycat assailants, intent on attacking Israelis to honor the memories of the original terrorists. Instead, the security forces would rather end these incidents with as little gunfire and as few casualties as possible. The problem is that Israeli public opinion is not entirely in line with the approach “if someone comes to kill you, arise to kill them first.” This rabbinic interpretation of the Bible has become a moral mandate. Israelis have come to see it as a kind of overriding principle, which even supersedes official IDF procedures for opening fire.

The dispute about these procedures for opening fire reflects a deep debate over principles, which has been brewing over the past few months between Israel’s political class and its military leadership. Finance Minister Moshe Kahlon’s initiative, written about in Al-Monitor, is an attempt to bridge these two conflicting approaches. Prime Minister Benjamin Netanyahu’s government is a right-wing government, and it may be even the most right-wing government that the country has ever seen. The sole relatively moderate force in it is ultra-Orthodox party Shas, which has been considered until recently as a right-wing party in every way. Shas leader Aryeh Deri is the most lucid, most moderate and most pragmatic leader in the entire Cabinet. It is Deri who enables Netanyahu and Defense Minister Moshe Ya’alon to withstand the heavy pressure from right-wing ministers, despite constant pressure to take a much harder stance against terrorism. Likud ministers such as Erdan, Yisrael Katz, Zeev Elkin and Yariv Levin, not to mention HaBayit HaYehudi Ministers Naftali Bennett and Ayelet Shaked, want to break sharply to the right and take measures that the defense hierarchy and the IDF reject completely out of hand. With the backing of the defense minister, the army — particularly the coordinator of government activities in the territories, Maj. Gen. Yoav Mordechai, and Eizenkot — would prefer to show as much restraint as possible.

The IDF’s leadership has been signaling relentlessly to the political class that the escalation resulting from a continued stalemate will be hard to check. “There are tens of thousands of armed individuals in the West Bank, in the Palestinian security forces and among the Tanzim militants [Fatah],” a senior security official told Al-Monitor on condition of anonymity. “As long as they stay away from the violence, these incidents can be contained.” What the IDF fears is that the lack of any diplomatic plan on the horizon will eventually draw these armed Palestinians into the circle of violence, and that the third intifada will start to look like the second.

Political pressures on the uniformed class are growing steadily. So far, the highest ranking figures in the political class (the prime minister and his defense minister) have succeeded in avoiding a direct clash with the chief of staff and his officers. Nevertheless, Netanyahu waited four whole days before giving his support to the chief of staff after the raucous “scissors debate” (over Eizenkot's statement) erupted. If the current situation continues and no end to the current wave of terrorism appears on the horizon, the relatively idyllic relationship between the IDF and Israel’s decision-makers will also come to an end.