Human rights organizations can stop Israelis from ignoring what they and their leaders are trying to repress or bury. ​ 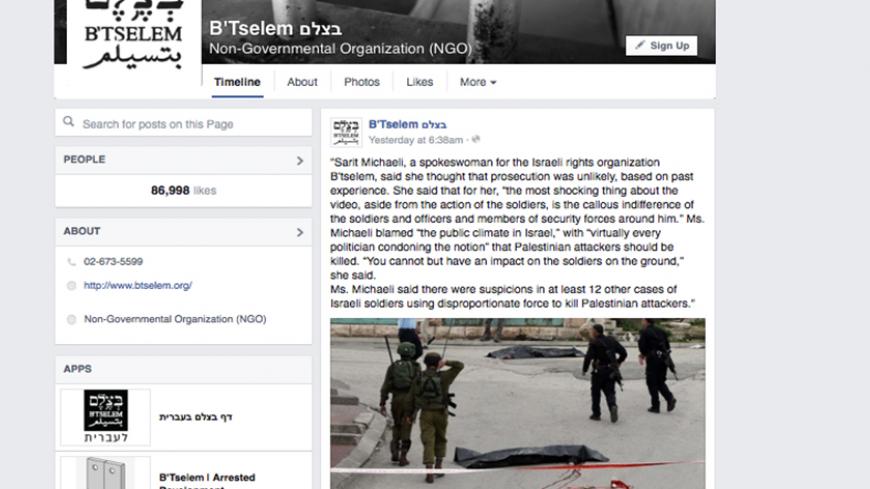 The B'Tselem Facebook page shares an article on the shooting of a Palestinian by an Israeli soldier in Hebron, March 28, 2016. - FACEBOOK/B'Tselem

“If I were the defense attorney for the young man from Hebron, I know who I would have summoned as my first witness claiming that the responsibility for the killing cannot be borne solely by an 18-year-old boy.” So read the Facebook posting by Michael Sfard, an attorney and international law expert who represents several Israeli human rights organizations, concerning the soldier accused of murdering an incapacitated Palestinian man on March 24. On video shot by a B’Tselem activist, the soldier is seen shooting the man in the head as he lay on the road after earlier trying to stab Israeli soldiers. The video sparked a public outcry.

The witness to whom Sfard is referring is any one of a long line of government ministers and Knesset members who have been relaying a clear message to the citizens of Israel since the start of the latest wave of terror last fall: Attackers bearing knives must be killed. Yesh Atid Chairman Yair Lapid, for example, told radio interviewer Nissim Mishal in October 2015 that Israel must confront terror attacks “with zero tolerance.” Lapid said, “You see someone with a knife, you see someone with a screwdriver, you should shoot to kill, don't think twice. There’s total backing [for this] from the legal and political system."

This view is not only held by right-wing and centrist politicians in Israel. In a sermon delivered two weeks ago, Israel’s chief Sephardic rabbi, Yitzhak Yosef, said, “Someone with a knife comes, it’s a mitzvah [commandment] to kill him. Don’t start being afraid … that someone will petition the Supreme Court, or some general will show up and say something else. … The minute a terrorist knows that if he comes with a knife he’s a dead man, this will deter them. That’s why it’s a mitzvah to kill him.”

Since the start of the intifada, B’Tselem activists and other witnesses have used cameras to document many instances of Israeli soldiers whose fingers were too quick on the trigger. The first recorded incident, aired on television stations around the world, showed the killing of a young Palestinian woman named Hadil Hashlamoun in September 2015. Hashlamoun had waved a knife at a soldier manning a checkpoint near the Cave of the Patriarchs in Hebron, but did not pose an immediate threat to his welfare. The soldier did not even try to stop her. Instead, he pointed his rifle at her and fired a volley that killed her. The incident sparked outraged reactions in the Palestinian Authority-ruled territories. Young Palestinians who carried out terror attacks in Israel in the ensuing weeks noted on their Facebook pages that they had been deeply affected by the incident and sought to avenge the young woman’s death.

The code of conduct advocated by many Israeli public figures has influenced events in various places in Israel. In dozens of terror attacks and their aftermaths, recorded by eyewitnesses on their cellphones, soldiers, police and citizens are seen shooting perpetrators even after they have been incapacitated and no longer constitute a threat and in cases that obviously call for a less radical response.

This is what led the Israel Defense Forces (IDF) chief of staff, Lt. Gen. Gadi Eizenkot, to address the issue in an unusual public statement on Feb. 17, in which he tried to convey that in dealing with such events, some judgment must be used. “I don't want a soldier to empty a magazine on a girl with scissors,” Eizenkot said in a conversation with high school students in the central Israeli city of Bat Yam, incurring condemnation from government ministers and lawmakers.

Transportation Minister Yisrael Katz from Likud was quick to respond, posting on Facebook, “I hope that his comments about automatically opening fire on minors were not misunderstood, causing respondents to hesitate and putting people’s lives at risk. The limitations and codes are clear, but terrorists cannot be allowed to live while endangering the lives of Jews.”

The chief of staff, who, as he said, does not want to see a soldier fire an entire magazine at a 13-year-old girl, nonetheless has not issued new regulations on detaining suspects or rules for dealing with the situations that have arisen during the current wave of terror. Perhaps the criticism directed at him by the political echelon after his remarks last month was enough for him, and he now prefers to keep a low profile.

The claim that public figures in Israel are also to blame for the alleged execution in Hebron was not meant as a defense of the soldier who committed the shooting. The soldier was not acting in self-defense. He did not fear for his life or for those of other soldiers, and from initial examination of the incident, it turns out that he wasn't even part of the force operating in the area when the man attacked. Rather, he arrived after the incident was over. He apparently acted the way he did because that was the way the wind was blowing.

The message encouraging itchy trigger fingers is also conveyed through the war being waged by the right-wing government in recent months against human rights organizations in Israel. Topping the list of targets is Breaking the Silence, an organization of IDF veterans reporting rights abuses by the military, but B’Tselem is also coming under frequent attack. Prime Minister Benjamin Netanyahu and his Cabinet ministers have turned the people who protect human rights into enemies of the state who, in their view, spread libel about Israel around the world. Defense Minister Moshe Ya'alon called members of Breaking the Silence “traitors” and then tried to take it back.

Is the war against human rights organizations another message being conveyed by the government to the public that protesting for Palestinians' basic human rights runs counter to Israeli interests? Is the government also saying that the support of these rights — for example, using reasonable force rather than automatic weapons fire during an arrest — is, in fact, an act of treason?

The B’Tselem video from Hebron, as well as other photos and videos from cameras that the organization has distributed to Palestinians for its Camera Project, underlines the need for the organization and is the decisive answer to the campaign being waged against it. Israel needs B’Tselem, Breaking the Silence and other human rights groups so that Israelis stop ignoring what they and their leaders are trying to repress and bury. ​