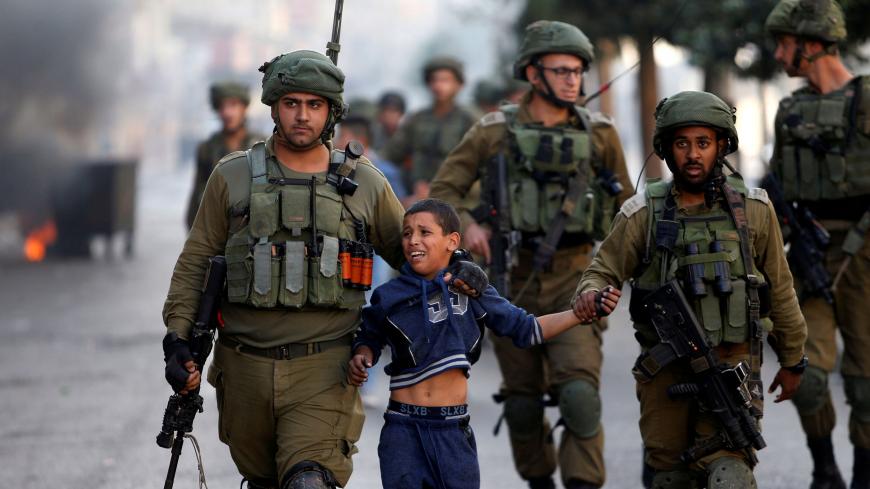 Two video clips that were recently disseminated by human rights organizations strengthen Palestinian claims that the Israel Defense Forces' (IDF) presence in the West Bank is larger than in the past. Unfortunately, the videos also show that friction between the soldiers and the Palestinian population has escalated and become more violent.

In a video taken by security cameras in the Jericho area and disseminated by B’Tselem on Feb. 22, four soldiers are seen beating a Palestinian youth, Yasin al-Saradih, who tried to attack them. They shoot him at close range, then drag him into an alleyway. Palestinian voices can be heard as onlookers watch what was happening from the store windows, saying, “They are killing him.” His family and B'Tselem claim that for several long minutes, the soldiers prevented Saradih from receiving medical treatment that could have saved his life.

After the incident, the IDF stated that the attacker had run toward the soldiers with an iron rod in his hands. “The [IDF] force fired at him, and evidently he was not harmed by the shots. Afterward, the soldiers used force to arrest him. In the course of this incident, the Palestinian even tried to grab and run away with the weapon of one of the soldiers.” The IDF did not address B’Tselem’s claim that Saradih was severely beaten after he posed no threat.

Another video disseminated by the Yesh Din organization on March 2 documented an Israeli border police officer throwing a stun grenade, for no discernible reason, at a couple holding an infant and running away. The couple had escaped from their home in the West Bank Burin village after a smoke grenade was thrown into it. In response, Israel police released a statement saying the officers discerned two suspects trying to flee the place where dozens of disruptive men stood crowded together and, in response, one threw a single stun grenade toward them. According to the police, the officers had not been able to see the infant. “If the officers had noticed the baby, needless to say they would have acted accordingly,” police said.

These two films testify to the complex reality in the West Bank. Israeli youths conscripted at the age of 18 find themselves confronting Palestinian citizens in an atmosphere of increasing anger and violence. While the occupation continues, this reality — of military activity within a dense civilian population — will only deteriorate, along with the chances for reconciliation between the two peoples.

Also on Feb. 22, B’Tselem published the testimonies of the Jarrar family from Jenin in the wake of a violent operation by IDF forces to capture Ahmad Jarrar, who murdered Rabbi Raziel Shevach last month. Inas Jarrar told a B’Tselem investigator how the IDF used dogs when the soldiers burst into their home. According to Inas, she and her husband Mabruk hurried their two children (aged 3 and 9) into their beds as soon as the soldiers entered their house. Then a dog entered their bedroom, sank its teeth into her husband Mabruk’s shoulder and pulled him down to the ground. Inas tried unsuccessfully to pry open the dog’s teeth. The two children, screaming and crying in terror, hid behind the bed.

In the testimony she gave to B’Tselem investigator Abd al-Karim Sa’adi, Inas said the following:

“I begged them to save my husband from the dog, but they just stood there and did nothing. I told the soldier that no one was leaving the house and that he could shoot me if he wanted to. Those were terrifying moments for me. I went quickly back to the bedroom. The dog still had its teeth sunk in my husband’s shoulder and the children were hiding behind the bed. I tried to pull my husband away again and managed to drag him to the entrance, where the soldiers were standing. The dog didn’t let go. I shouted to the soldiers again to call off the dog, but one of them just said, 'Get us Ahmad Jarrar and then we’ll help you and release your husband from the dog.' Several soldiers and the dog dragged my husband down 19 stairs to the first floor.

“At that point, the children wet themselves. They were so scared, they couldn’t stand up."

Sa’adi has worked as an investigator for B’Tselem for 16 years in the Jenin region. In a conversation with Al-Monitor, he said that the escalation in the tensions between IDF soldiers and Palestinian civilians is due to the increased presence of the army in the territories and the fact that the IDF is entering new places in the West Bank's Area A, which is ostensibly under Palestinian civil and military control. He argued that the soldiers' aggressive behavior is an expression of the general mood of the Israeli public, which itself is affected by the Israeli leadership, over which the right has taken control.

“I don’t hate a soul,” Sa’adi said, “but when I encounter Israelis, mainly soldiers, I know that they don’t know anything about me. They no longer regard me as a human being. To them, I am only a terrorist or someone armed with a knife. But I am a human being. I love music, I study, I love life. The soldiers don’t see those things. They are the product of the Israeli reality and the policies dictated by the Israeli leadership to the army.”

Sa’adi said that he witnessed a very harsh scene in the Jarrars’ living quarters in Jenin. He described “pieces of the flesh of the family members that were bitten off by the dogs.” Mabruk was released to his home and claims the family had no connection to the murder committed by their relative.

“The Israelis don’t know much, or don’t want to know about what’s going on in the West Bank. But I’ve been working on this for so many years and I am convinced that when the soldiers go home after their discharge, it will influence the future of Israeli society. These youths, former soldiers, will be fathers, politicians, maybe even leaders. But the violence will affect them over the years and will also become an inseparable part of Israeli society.”