In an interview with Al-Monitor, B'Tselem Director Hagai El-Ad defends the organization's unequivocal, yet unpopular stance against Israeli policies: ''The moral image of the state is important for many Israelis and not just for B’Tselem activists.'' 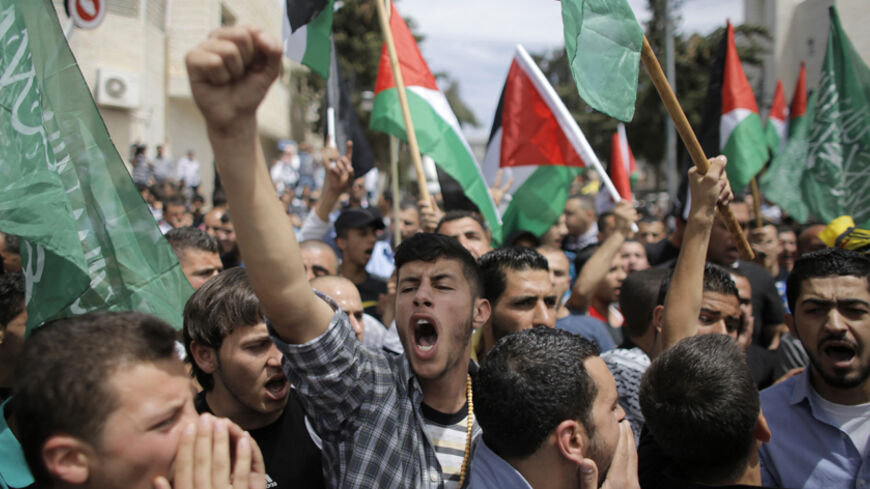 Mourners chant slogans during the funeral of two Palestinians who were shot dead by Israeli forces in the West Bank city of Ramallah, May 16, 2014. - REUTERS/Ammar Awad

Six months have passed since B'Tselem disseminated the video footage documenting the killing of two Palestinian youths — Nadim Nawarah and Muhammad Salameh — during the May 15 Nakba Day demonstrations in Bitunya, a small town near Ramallah. An inquiry by the organization raised suspicion that the youths had been deliberately killed.

On Nov. 12, it was authorized for publication that a border police soldier was arrested on suspicion of murdering the two youths, having used live bullets instead of rubber ones. In tandem, the soldier’s commander was also questioned on suspicion of having known that live fire was used but having failed to report it.

The footage, filmed by a security camera located at the Bitunya intersection, stirred up a huge storm in Israel and around the world. The Israel Defense Forces emphatically argued that the riot-control force had not used live ammunition. “The video footage has been tendentiously edited, failing to reflect the violent disturbance,” was the response of the IDF spokesman. That response failed to address the allegations of the Palestinians that live ammo slugs had been removed from the bodies of the youths, who apparently posed no danger to the soldiers and were probably not involved in the violent demonstration that was taking place at the same time.

Defense Minister Moshe (Bogie) Ya’alon also called the video into question, reinforcing the prevailing assumption in Israel that the Palestinians had, as usual, distributed a bogus and doctored video.

The fact that the video was disseminated by B’Tselem — an organization that Foreign Minister Avigdor Liberman dubbed in the past as “aiding terror” — caused many Israelis to be even more suspicious of the video’s authenticity.

B’Tselem was founded about 25 years ago with the stated goal of documenting activities in the territories that are deemed by it to be “human rights violations,” and publicizing them in Israel and around the world. The intense activity on the ground using investigators and video cameras, which were distributed to hundreds of residents in the territories, presented Israelis over the years with an unpleasant self-reflection. Oftentimes, the organization has found itself in a head-on confrontation with the IDF and the security forces, leading many to think of the organization as making libelous aspersions against Israel around the world.

Naturally, in keeping with its stated goal, the organization sets out to expose Israeli infringement of human rights in the territories. Indeed, B’Tselem investigators have carried out over the years worthy activity in the territories — be it exposing confrontations between settlers and Palestinians, "price tag" hate crimes operations or clashes between the IDF and the Palestinian population. But the organization is partly to blame for some of the Israeli public animosity toward it.

During Operation Protective Edge, for example, concurrent with providing topical reviews and painful testimonies from the Gaza Strip, B’Tselem activists got radio airtime during which the names were read of the Palestinian children killed in Gaza. This action was contested in the Supreme Court, with the organization once again being in the eye of the storm.

B’Tselem’s denunciations of terror attacks or rocket fire from Gaza toward Israel were usually perceived to be lip service. The organization allegedly was solicitous only to the suffering of the Palestinian people while ignoring the brutal attack by Hamas against Israel.

“If Palestinians in the West Bank are shot and there’s no video, nobody cares. And if there is a video, its authenticity is then called into question,” B’Tselem’s Director Hagai El-Ad told Al-Monitor in an interview. “The Israeli response was not to call for an investigation to find out the truth but rather to call B’Tselem a bunch of liars. People appointed themselves as pathologists and experts on how a person who has been shot should fall to the ground. People did not like the way the youths fell to the ground after being shot. They didn’t find their fall to be convincing enough. It was some kind of an alleged proof that the video was bogus even though two bodies were lying in the hospital.”

Al-Monitor: Instead of being wise, you tried to be right, for example by reading [on the radio] the names of the dead Palestinian children during Operation Protective Edge. Thus, you lost the attention of many Israelis.

El-Ad: We wanted to show that more than 500 youths and children who were killed by Israel during Operation Protective Edge were not just a number. They each had a name. This is part of our objective, to reduce the repression space that so many Israelis suffer from. I don’t know what conclusion they would have arrived at — maybe that there’s no choice and Hamas is to blame. But at least the fact that 2,100 Palestinians were killed in Gaza, and quite a few of them were civilians, children and youths, would not have passed unnoticed by them.

Al-Monitor: By walking on the edge, haven’t you missed your goal? Instead of making the public look in the mirror you put in front of them, people ignore you. Even the Bitunya video was received with suspicion.

El-Ad: The hardest time for people to commiserate with the suffering of others is when they are threatened. I think that the moral image of the state is important for many Israelis and not just for B’Tselem activists. But over the years it has become increasingly harder to espouse this position. During the many years of occupation, Israel has done immoral things such as shooting the youths in Bitunya and like some of the things the military did during Operation Protective Edge. But to complain about B’Tselem is to shoot the messenger. That’s the price we are paying.

Al-Monitor: So the arrest of a murder suspect is the response to the people who attacked you? Do you think that will improve your image among Israelis?

El-Ad: What happened here was rare, not only in terms of the intense cynicism and denial but also in terms of the conjuncture of facts, which tilted the balance, leaving the establishment no choice but to conduct an investigation. In 99% of the cases in which Palestinians are shot dead by soldiers in the territories, which happens not infrequently, there is no video and there is no autopsy. In most of those cases, an investigation is not launched. And if it is, it’s quite quickly closed. In light of this case, it’s important that people reflect on what this says about other cases.