Knesset member David Bitan, coalition chairman and a close associate of Prime Minister Benjamin Netanyahu, has proposed legislation that would make it easy to revoke the nationality of activists like B’Tselem chief Hagai El-Ad. 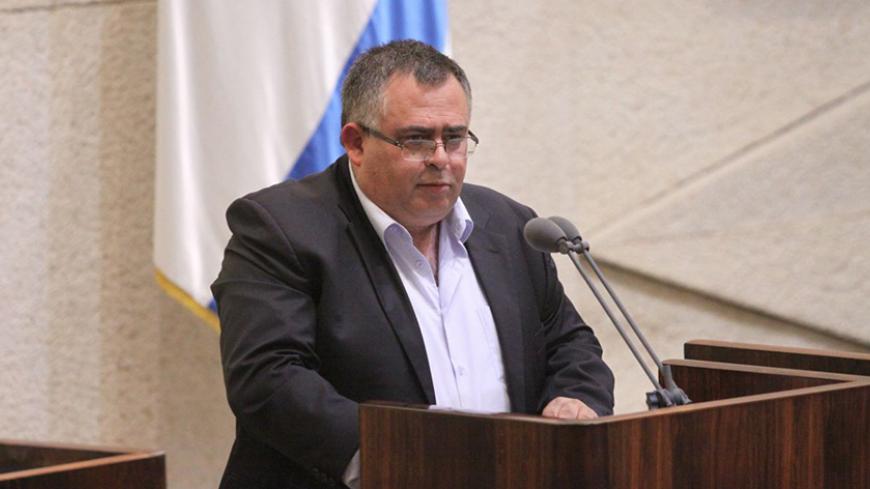 It took less than 48 hours for the chairman of the coalition, Knesset member David Bitan (Likud), to submit two provocative proposals to punish Israeli citizens who call for action against Israel while overseas. Following an Oct.14 speech to the UN Security Council by Hagai El-Ad, the director of the B’Tselem human rights organization, Bitan announced that he was investigating the legality of stripping El-Ad of his Israeli citizenship. Bitan claimed that remarks by the B’Tselem head during the UN debate over the Israeli occupation constituted “an explicit breach of trust by an Israeli citizen against the state, and as such he should find himself another citizenship.” He later announced that he would take steps to pass a new law making statements like El-Ad’s overseas illegal.

A lawyer by training, Bitan must have known that there is no legal possibility of stripping an Israeli of his citizenship simply because that person addressed an international body. According to the law, people can only be stripped of their citizenship in extreme cases of treason, and even then, the interior minister must first present the case to the courts, and their decision must be approved by the attorney general. In June, Interior Minister Aryeh Deri asked the attorney general to begin proceedings to strip convicted Islamic State members of their Israeli citizenship.

Until 2008, the law did allow the interior minister to directly strip an individual of his citizenship. Former Interior Minister Eli Yishai was the first to make use of this option, revoking the citizenship of a Lod resident accused of committing a terrorist attack on behalf of Hamas. In 2008, the Israeli Citizenship Law was amended to reduce the minister’s authority by requiring court approval for the procedure.

There have been several proposals over the past few years to impose civil sanctions against Arab Israelis convicted of involvement in terrorist activities. Most were proposed by Yisrael Beitenu members. None was actually made into law.

Over the past few months, Bitan has become the prime minister’s “fixer,” doing all of his dirty work. It is therefore reasonable to assume that all he wants to do now is to foment an even more incendiary mood among the Israeli public, in the spirit of his commander, Benjamin Netanyahu. The prime minister wages war against leftist groups whenever he needs to bolster himself politically among his right-wing constituents.

This explains why, shortly after Bitan won himself a place in the headlines for his initiative to strip El-Ad of his citizenship and faced the expected sharp responses from the left, he switched to plan B. In interviews with the press, he explained that since it was legally impossible to revoke the B’Tselem director’s citizenship, he plans to submit the “Hagai El-Ad law” to the Knesset, forbidding Israelis from appearing before international organizations with operational authority, such as the UN Security Council, to ask them to impose sanctions against Israel. His proposal goes on to state that anyone who violates this law could lose their citizenship. In conversations with his inner circle, Bitan said that he believes the law would pass. While that is highly unlikely, he still continues to cement his status as sheriff of the Likud.

When the Knesset begins its winter session at the end of the month, Bitan is expected to set the tone. This is not just because of his powerful position as chairman of the Likud faction and the coalition. It has just as much to do with his style and means of operating.

If the Hagai El-Ad Law is actually submitted, the public and political discussion and debate over the issue and its implications will extend beyond Israel’s boundaries, and not in a positive way. It is already clear that Bitan will soon submit another controversial law, put together to match Netanyahu's precise needs, to eliminate Israel's public broadcasting corporation.

The new body being created over the past few months (designed to replace the Israeli Broadcasting Authority, under legal bankruptcy procedures) was supposed to bring public broadcasting free of politics to Israel. Over time, however, various members of the government, such as Netanyahu and Culture Minister Miri Regev, realized that the emerging new corporation was too independent for their tastes. The prime minister claimed that the corporation was leftist, while Regev asked, “What good is the corporation if we don’t control it?”

Bitan is now acting like a hangman and trying to crush his fellow party member, Minister of Internal Security Gilad Erdan. As minister of communication in the previous government, Erdan led the effort to establish the new corporation with Netanyahu’s approval. Bitan’s main argument on behalf of eliminating the new corporation is that doing so would save the state more than 2 billion shekels ($519 million). When Erdan disputed these figures, Bitan responded, “He should take the side of the Likud. I would recommend to him that he take the side of the right, and not the side of the left.”

Accusing Erdan of being a leftist is one of the most unfounded statements Bitan has ever pronounced. Even Likud old-timers can’t remember a chairman like this, who prefers to provoke fights instead of uniting the party. “It is quite possible that Bitan realizes that Erdan has fallen out of favor with Netanyahu, so he can allow himself to act this way. What is certain is that he wants to appease the prime minister, so he is waging his own war against the left,” a senior Likud minister told Al-Monitor on condition of anonymity.

Veteran party members claim that while former coalition chairs maintained a certain level of official decorum, Bitan is redefining the position. He keeps busy pulling out new accusations, twisting people’s arms and making irresponsible remarks. While his remarks may not always be coordinated with Netanyahu first, they seem to be intended to please him. What the cases of the public broadcasting corporation and the Hagai El-Ad law have in common is that they represent a war against the left. Bitan is waging a one-man campaign to delegitimize that sector in order to score political points with Likud activists and the prime minister.

The way things look now, the Knesset’s winter session will bear Bitan’s mark: aggressively fueling passions and debate not only among the public at large, but even within the coalition itself. Netanyahu will set off on a collision course against the left, with a vitriolic agenda that is more dangerous than any before. The distinguishing mark of the 2016 Likud will be a crass and unrestrained right wing, contributing to the overall sense of disgust with the ruling party, even from within. Perhaps this is where the seeds for the next government turnover will be found.