Hebron residents who documented the incident in which a young Palestinian woman was shot by an IDF soldier in Hebron contradict the IDF's story. 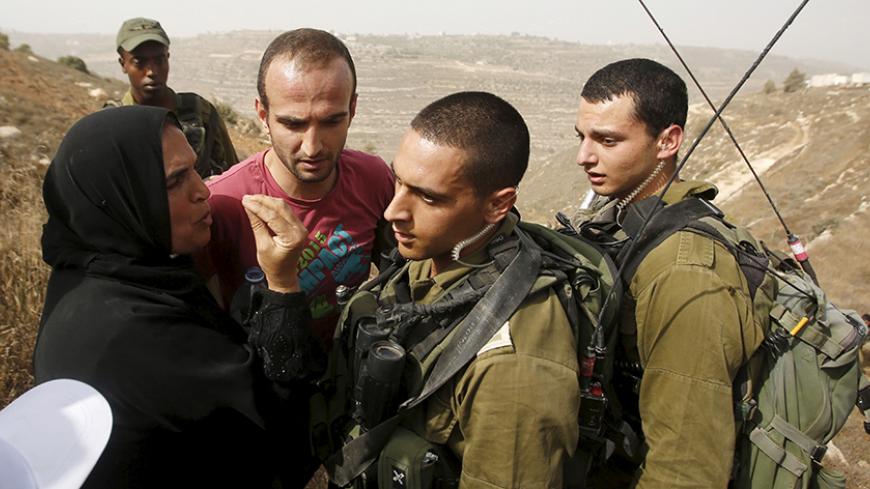 A Palestinian woman argues with Israeli soldiers after Palestinian farmers said they were stopped by Israeli army and settlers from working in their farmland in Halhul town near Karme Tzur settlement, north of the occupied West Bank city of Hebron, Sept. 11, 2015. - REUTERS/Mussa Qawasma

A photo from Hebron shared around the world this week shows an Israeli soldier and a young Palestinian woman. She is covered in a niqab, looking at the soldier pointing his rifle at her. The photo was taken on Sept. 22 by a volunteer with the Youth Against Settlements group. Moments later, Hadil Hashlamoun, 18, was shot in her abdomen and critically wounded. She was taken to Shaare Zedek Hospital in Jerusalem, where she was pronounced dead.

A preliminary Israel Defense Forces (IDF) investigation found that the soldiers stationed at the checkpoint separating the area under Palestinian control from the one under IDF control called on the woman to stop after the metal detector she went through at the roadblock went off. When she kept walking, the soldiers fired at the ground to stop her. After she tried to stab a soldier with a knife she was carrying, he shot her. The IDF spokesman even provided a photo of the knife she was allegedly carrying.

Issa Amro, one of the founders of Youth Against Settlements, told Al-Monitor that volunteers who took pictures of the young woman at the roadblock are sure she was not a terrorist and did not intend to stab a soldier at the roadblock. According to him, the soldier and the Palestinian woman were kept apart by a metal barrier that is at least 1.5 meters (5 feet) high, which would not have enabled her to stab him, and she certainly could not have done so when he had his weapon pointed at her.

Amro said that the volunteers also documented the report of Fawaz Abu-Aysheh, a resident of the Hebron neighborhood of Tel Roumedia. He told them that he tried to mediate between the soldier at the roadblock and the young woman. "Abu-Aysheh told us that he asked to interpret the words of the young woman, who had not understood the orders [shouted in Hebrew] by the soldier. When she turned to leave the checkpoint, the soldier there opened fire at her. Even after she fell in a pool of her own blood, he kept shooting until other soldiers shouted at him, ‘What are you doing?’ and moved him from the post.”

It’s hard to determine whether Hashlamoun meant to carry out a stabbing attack before she was shot. The still images taken at the scene support Palestinian claims that even if she did intend to stab the soldier, she could have easily been stopped without being killed.

The contradiction between the IDF and Palestinian versions would not have come to light were it not for the Youth Against Settlements activists operating in the flashpoint city. Amro claimed that in the past, such an incident would have barely made headlines. “In Israel they would have said that a female terrorist tried to carry out an attack. People would see in their mind’s eye a woman rushing with a knife drawn, and that would have been the end of that,” he said. “Now the soldiers know there are cameras and there’s documentation. The days when you could conceal everything that happens in Hebron or present a false version of events are over. We are on the ground and we make sure to show our version.”

Amro said he received the photo of Hashlamoun standing frozen to the spot in front of the soldier with his weapon drawn in the morning hours, shortly after she was shot, but waited patiently to hear the army’s version. Only when the announcement by the IDF spokesman came out, saying that a Palestinian female terrorist had tried to stab a soldier, did he disseminate the photos. “We wanted to show that this was not the truth, or at least not the whole truth,” he said. “The young woman could not even have stabbed the soldier. She was shot for no reason.”

The Youth Against Settlements organization was formed in 2007 and attracted notice after handing out cameras to Palestinians in Hebron and the rest of the West Bank. “We distributed cameras to Palestinian families living in sensitive areas close to checkpoints,” said Amro. “We teach the whole family — women, men and children — to use the equipment, and train them to document things that are important for Israel and the world to see. We also have volunteers who stand by the roadblocks and document incidents. There are incidents all the time in Hebron. One of the more famous ones we photographed was of the soldier nicknamed ‘David the Nahlawi,’ which showed what really goes on in Hebron.”

In April 2014, a soldier named David Adamov from the Nahal battalion was photographed shoving a Palestinian youth, cursing him, cocking his weapon and threatening to shoot him and another youth. The documentation went viral, setting off a storm of reactions in Israel and across the world and exposing a complex reality. In turbulent Hebron, IDF soldiers carry out their policing duties among a crowded Palestinian population and amid the Hebron settlers, the most extreme of the West Bank settlers.

The organization was not the first to come up with the idea of distributing cameras to families at flashpoint areas. B’Tselem started the practice almost a decade ago to expose the reality of Israel’s occupation of the territories. Amro, one of the instigators of the B’Tselem project, explained the difference between the two initiatives. In addition to “documenting the friction at the checkpoints,” he said, “we encourage the families to document the hardships and the complexity of life under such conditions. Everyone sees this as an important national mission; it awakens in people a strong desire to show the world what goes on in their town.”

A portion of his interview with Al-Monitor follows:

Al-Monitor:  Will your missions bring about change?

Amro:  We want change, for [the soldiers] to know that they can’t do whatever they want. But it doesn’t always work out. In truth, the soldiers now on deployment in Hebron are the toughest stationed in the city in years.

Al-Monitor:  Was it different in the past?

Amro:  In the past, different army units were deployed in Hebron, alternating every few months. During the first and second weeks, there was naturally a certain tension between the army and the civilians, and then it would dissipate. They got to know us and we them, and we would get into a kind of routine. With the current unit, there’s no routine. It’s all shouting and giving orders and cursing. We see the results now with the unjustified killing of a young woman.

Al-Monitor:  Are tensions high in Hebron?

Amro:  Yes, and the higher they get, the longer the string of incidents and the more important the mission of our organization’s volunteers. But everywhere our people go, like to the funeral of Hashlamoun, we hear words of encouragement from the residents of Hebron. They tell us, "Keep going, keep going, so that the world may see and know what we are going through."