How one Palestinian with a camera rattled Israelis

Ever since he taped the incident in which an IDF soldier shot an already injured Palestinian attacker in Hebron, Imad Abu Shamsiya has been receiving death threats from extreme-right activists. 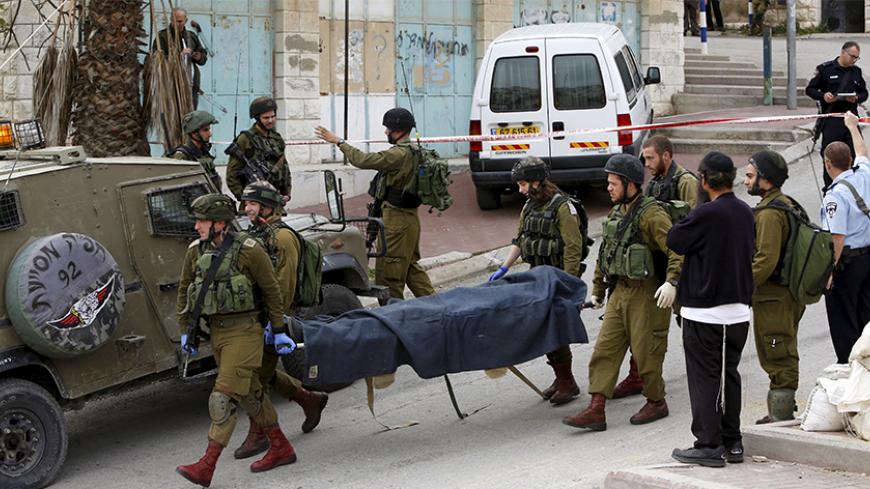 Israeli soldiers carry the body of one of two Palestinians whom the Israeli military said were shot dead by Israeli troops after they attacked an Israeli soldier, in Tel Rumeida, in the West Bank city of Hebron, March 24, 2016. - REUTERS/Mussa Qawasma

B’Tselem Director Hagai El-Ad has appealed to the Israeli army and the police to demand protection for Imad Abu Shamsiya, the Palestinian who filmed the March 24 shooting death of assailant Abdel Fatah al-Sharif by an Israeli soldier in Hebron. Since the video became public, and especially since the soldier’s arrest, Jewish settlers in Hebron have been threatening Abu Shamsiya’s life and throwing stones at his home in the Tel Rumeida neighborhood. They even uploaded his photo onto right-wing websites with a call to execute him. Abu Shamsiya has lodged a complaint with the police, but so far no suspects have been arrested. He said neither the Israel Police nor the Israel Defense Forces are in any rush to act against the violent Hebron settlers.

In a conversation with Al-Monitor, Abu Shamsiya talked about life in the shadow of fear since the video went public, and about his work as a cameraman for Israeli human rights organization B’Tselem, which tries to make public the complex life of Palestinians under threat by Hebron’s most radical Jewish settlers. Six settler families live in Tel Rumeida, one of which is the family of radical right-wing activist Baruch Marzel.

“The first threats were made by phone,” he said. “I got a call on my cellphone from an unidentified number. The caller asked me, ‘Are you Imad Abu Shamsiya?’ When I said I was, he told me, ‘We will kill you; we will burn you and your family if you don’t leave Tel Rumeida.’”

Attempts to kick Abu Shamsiya out of the tense neighborhood did not start with the recent video. About a year ago, a firebomb was thrown at his house, burning part of the building. Several weeks later he observed a settler pouring something into the water tanks on the roof of his house. When the police arrived, it turned out the settler had poisoned the water. The police ordered Abu Shamsiya to move the water supply tanks from the open roof to a sheltered area that the settlers cannot access. “Harassments became a daily occurrence,” he said. “The day after publication of the execution video and the arrest of the soldier, another, larger group of settlers came and attacked my home with stones and threatened to burn it down. Afterward, on their websites, they put up my picture with the English caption, ‘Wanted.’ In Hebrew it said, ‘This is the dog Imad Abu Shamsiya who filmed the Israeli soldier. He needs to be eliminated.’”

Since the growing number of attacks and threats against him, Abu Shamsiya does not leave the house. “I’m afraid to go out. I can say I’m a hero until I’m blue in the face, but I have a family and children to look after. My job now is to protect them. When I went to the police station to file a complaint, the policeman told me, ‘Don’t worry, these are just threats.’ I told him that if anything happens to me or to any member of my family, I will hold all of them totally responsible.”

Abu Shamsiya started filming for B'Tselem in Hebron five years ago, after Tel Rumeida settlers threw stones at his 13-year-old daughter as she was walking home from school. She suffered moderate injuries to her face and required medical treatment. A B’Tselem investigator who came to his house to take down his testimony about the incident suggested to Abu Shamsiya that he be given a camera with which to document incidents that the Israeli public must be shown. “I agreed immediately,” he told Al-Monitor. “B’Tselem gave us instructions and lectures on how to film in a way that does not violate the law; they taught us our rights, how to conduct ourselves in dangerous situations and how to distance ourselves from Israeli soldiers in order not to risk violating the law.”

Abu Shamsiya soon became a familiar figure in the neighborhood. Residents started calling him when they saw an incident that they thought should be documented. “You have to understand,” he said, “when I arrive on the scene with a camera, the army acts differently. They [the soldiers] understand the power of photography and the significance of the camera’s presence. The camera has become a means of deterrence. Gradually we also understood something else of importance — we started believing that the camera was our weapon in defending our rights.”

On the day that the Israeli soldier shot the Palestinian attacker as he lay wounded on the ground, Abu Shamsiya was sitting with his wife on the balcony of their home in the Tel Rumeida neighborhood. Suddenly he heard a hail of bullets. He grabbed his camera and ran to document the incident, as he usually does.

“At first I saw a man wearing a black jacket and black pants spread eagle on the ground,” Abu Shamsiya said. “He was still moving. Next to him was another man who was already dead, his face was covered in blood. Within seconds dozens of Israeli soldiers and settlers from the area arrived and congregated at the site. The soldiers prevented me from filming. I moved away and climbed up to a higher spot from where I could see what was going on. Then two ambulances arrived to treat a third man who was lying on the ground. That was the Israeli soldier who had been stabbed. After they put the soldier in the ambulance and closed the door, I heard an Israeli soldier preparing to shoot. I heard him cock his weapon a few times. I concentrated on him. At that moment I was scared, I thought he had seen me filming and was going to shoot me any minute. But he walked past me and shot Abdel Fatah al-Sharif in the head.”

Abu Shamsiya said that what really makes him angry was the indifference of the people at the scene to the execution they had witnessed. The soldier who had fired even walked up to Marzel and shook his hand warmly. But what really bears examination and investigation, he said, is the fact that before the soldier carried out the shooting, he went up to an officer standing near the wounded Sharif, who was still showing signs of life and whose body was moving. “You can clearly see in the video footage: He handed the officer his helmet, probably also exchanged a few words with him, and then went and shot the Palestinian in the head. I can only assume he was given a green light. I don’t want to say an order, but he got permission from the officer to go and kill Sharif.”

Abu Shamsiya knows that his video footage, which has stirred up a storm in Israel and has been aired all over the world, not only brought to public attention the price of the Israeli occupation of the territories and the events there, but also honed a troubling development in Israeli society. “The fact that the soldier has been turned into a national hero by many segments of Israeli society is very dangerous for you,” Shamsiya said. “I know that without the footage, no one would have been arrested and life would have gone on as usual. After the shooting no one standing around there was bothered by what they had seen. But I am a man who believes in human rights. And I’ll tell you frankly, anyone violating the law must stand trial. If Sharif had lived, he should have been brought before a court for what he did. But not like this. Not an execution. Turning the shooter into a national hero is something I cannot grasp.”

by Murielle KASPRZAK and Joseph SCHMID | AFP | May 26, 2022
END_OF_DOCUMENT_TOKEN_TO_BE_REPLACED