Why Israelis are defending IDF soldier who shot Palestinian attacker

A recent poll shows that most Israelis side with an IDF soldier who shot a subdued Palestinian, even though it's clear the soldier was not acting in self-defense. 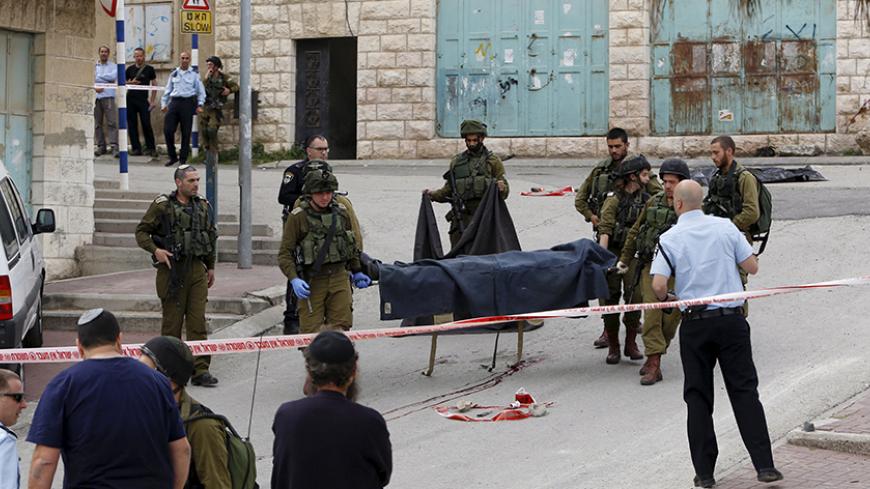 Israeli soldiers carry the dead body of one of two Palestinians the Israeli military said were shot dead by Israeli troops after they attacked soldiers in Tel Rumeida in the West Bank city of Hebron, March 24, 2016. - REUTERS/Mussa Qawasma

A short video filmed by a resident of the West Bank city of Hebron March 24 has been shaking Israel’s political, public and military foundations for four days now. The video ignited a battle between the Israeli right and the left, inflamed much of the Israeli public against the top brass of the Israel Defense Forces (IDF), set six government ministers against Chief of Staff Lt. Gen. Gadi Eizenkot and generated another down-and-dirty confrontation between Education Minister Naftali Bennett and Defense Minister Moshe (Bogie) Ya’alon together with Prime Minister Benjamin Netanyahu. Outside this inner circle, Yisrael Beitenu chair Avigdor Liberman mocked them both.

Above the fray hovers an emotional storm among millions of Israelis who refuse to accept international conventions while they trample on the rule of law and moral values. They defend an isolated soldier who shot a neutralized attacker in the head in Hebron and is now being indicted for murder.

This is not only a war between right and left, but between emotions and reason, between one’s boiling blood and political correctness.

On that morning, two Palestinians attacked IDF soldiers with knives as they ascended toward the Tel Rumeida neighborhood in Hebron. They managed to lightly wound one soldier before the others shot at them. One was killed on the spot and the other one lay motionless on the road, evidently dying (though there is no proof at the moment). At that stage, a B’Tselem activist who lives in a nearby apartment began to film the scene.

The video shows an IDF soldier lift his weapon, cock it, aim and shoot one bullet into the head of the assailant at a range of about 3 meters (9.8 feet). The man, Abdel Fattah al-Sharif, was killed on the spot.

As could be expected, the video generated a major storm as soon as it hit the networks. IDF spokesperson Brig. Gen. Moti Almoz reacted sharply. The chief of staff ordered an immediate investigation. The military police investigations unit arrested the soldier and took him handcuffed into custody as a suspect in a murder case. At this stage, the gates of hell opened on Israeli social networks, which are mainly dominated by the voice of the right. From there, the storm spread to the political system, the top military brass and the media.

The findings of the military investigation at this stage leave no room for doubt: The soldier did not act in self-defense and was not in any danger. The man did not pose a threat, as he was already subdued. He had even been examined and was found not to be booby-trapped and was not wearing a detonator belt. The soldier who shot the neutralized attacker had not been present at the site during the attack itself, but came afterward. He carried out the shooting 6 minutes after the incident had ended and the danger had passed. The area was quiet, with additional soldiers and medical staff circulating calmly. There was no atmosphere of emergency and no military procedure — the kind of drill that takes place when a dangerous agent is present in the vicinity — was active.

The left and the media accused the soldier of carrying out an execution without the authority or authorization of his superiors. The Facebook page of the soldier, a 19-year-old from the central Israeli town of Ramle, revealed that he has close connections with extreme right circles. In another video released two days after the incident, the soldier is seen shaking hands with Baruch Marzel, an especially radical right-wing activist who lives in Hebron. The handshake took place minutes after he had executed the attacker.

None of these incriminating details deterred the Israeli masses from siding with the detained soldier, whose identity is under a court-mandated gag order. A poll published on Channel 2 March 27 contained startling data: Most Israelis think that the soldier acted correctly and should not have been arrested. Only 21% of Israelis support Eizenkot’s public statements against him, and only 5% of the public thinks that his act constitutes murder, which was the bill of indictment given when the investigation was opened.

Support for the soldier crossed all political lines. Not only did the radical right and regular right-wingers join the protest wave, but the political center and even some on the left got on the bandwagon. Protests began on the social networks and mushroomed into petitions, demonstrations and protests throughout the country. Eizenkot, backed up by Ya’alon, were among the few to stand up against this wave. On the morning of March 28, at the Yedioth Ahronoth anti-boycott, divestment and sanctions convention, they were joined by President Reuven Rivlin, who had sharp words for those who incite against the chief of staff.

Usually, Israel’s chief of staff enjoys enormous popular support, much more than other political figures. There is no greater consensus in Israel than the one surrounding the chief of staff, no matter who he is. The fact that the chief of staff’s position this time was defeated by a tremendous public margin in favor of a young, anonymous soldier exemplifies the magnitude of the rupture. The Israeli public is consciously discarding dispassionate analysis of the event for raw emotion, siege mentality and tribal unity.

In the last half year, the Israelis have been victim of a difficult terror wave. So far, the terror has taken the lives of 34 policemen, soldiers and civilians. From the point of view of the Israeli public, the soldiers are doing their duty by protecting them with their bodies.

As far as most Israelis are concerned, all those who attack Jews deserve to die.

In the past, there were quite a few incidents in which Israeli policemen or soldiers spared wounded attackers and paid for this mercy with their lives. The fact that it was proven that the soldier faced no danger to his life hardly sways anyone in Israel. Overnight, the soldier became an Israeli hero, while Israel’s leaders and IDF heads were the subject of ridicule and scorn. This astounding phenomenon evokes memories of the tremendous sense of surprise at the results of the recent elections in 2015, when the polls had announced a clear trend toward Netanyahu. In both cases, it seems that many analysts did not foresee the prevailing public response.

There is reason for worry in the IDF as well. The military, like the people, is now divided. One section continues to adhere to the rule of law, moral values and following orders. The other part is mainly comprised of the forces with policing duties in Judea and Samaria. They are blending in with the settlers and becoming a kind of obscure police militia, not entirely controllable.