Has Bibi forgotten what loyalty means?

Instead of standing by Gadi Eizenkot and condemning the soldier who shot a Palestinian attacker in custody, Prime Minister Benjamin Netanyahu preferred to follow the public mood to the soldier's side. 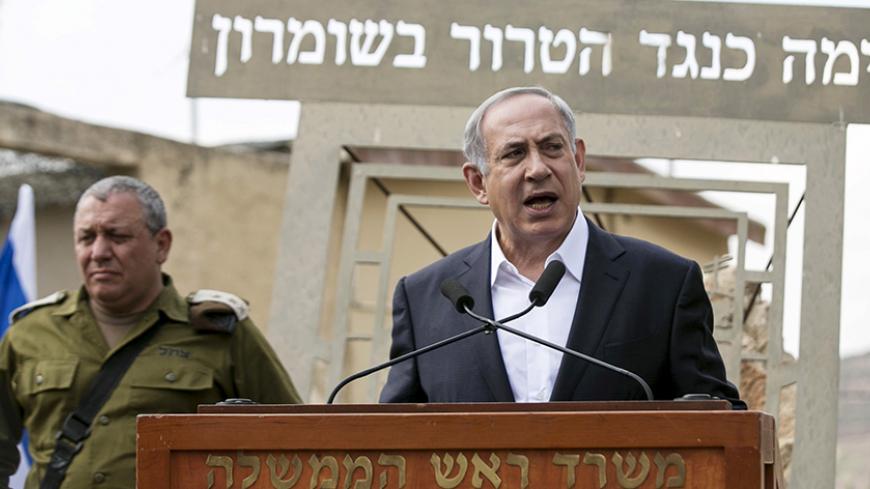 Israeli Prime Minister Benjamin Netanyahu (R) speaks to the media with Chief of Staff Lt. Gen. Gadi Eizenkot at a military base near the West Bank city of Nablus, Oct. 6, 2015. - REUTERS/Baz Ratner

Every Monday, at the start of the weekly Likud faction meeting in the Knesset, Prime Minister Benjamin Netanyahu makes a statement to the press on a topic or message he wants to promote.

This Monday, March 28, the Internet was flooded with comments in support of a soldier who shot and killed a wounded Palestinian attacker after the attacker was captured. In his remarks to the media, the prime minister expressed empathy and understanding for the soldier. Previously, Netanyahu had expressed reservations about the horrific and shameful act, but when he saw which way the public mood was heading, he decided to align himself with it.

“I heard the words of the father of the soldier," he said. "I have to say that as a father of a soldier, the words touched my heart. IDF [Israel Defense Forces] soldiers, our children, stand before murderous terror attacks by terrorists who come to kill them. They have to make decisions in real time, in field conditions, in stress conditions, in uncertain conditions. I rely 100% on the IDF, on the chief of staff, on the investigation. I trust that the investigation will consider all the conditions that I described, including operational conditions. I am certain that the investigation will be professional and fair toward the soldier."

The text may be short, but it captures Netanyahu’s ability of responding accurately to the public sentiment — which tends toward the right.

Shortly after the incident, Chief of Staff Lt. Gen. Gadi Eizenkot sent out his spokesman Moti Almoz, who issued an unusually severe statement. He declared, "An initial investigation into the incident found this to be a very grave incident that contravenes the IDF's values and what is expected of its soldiers and commanders." The statement generated angry reactions among the right.

Realizing that the shooting incident was turning into a political battle, Netanyahu decided that he would not leave the field to his rivals on the right. He could not let Yisrael Beitenu leader Avigdor Liberman and HaBayit HaYehudi head Naftali Bennett score points by embracing the soldier and his family. Bennett had actually called the soldier’s father on the phone, and Liberman behaved as if he were heading a public advocacy campaign in favor of the soldier.

There was one thing that was missing from Netanyahu’s text. He failed to explicitly back Eizenkot and ignored the unprecedented attacks on the chief of staff. Publicly embracing Eizenkot or at least standing by his side would have done more than any platitudes about how he trusts the IDF and its chief of staff. Instead Netanyahu showed himself to be a dyed-in-the-wool populist, taking the side of the shooter, a murder suspect who has emerged as a cultural icon in his own right.

Netanyahu could, for example, have condemned the inflammatory posters that appeared near the Defense Ministry in Tel Aviv over the weekend. The signs displayed such statements as “Shame on you! Even Ahasuerus let the Jews defend themselves.” They attacked Eizenkot for daring to consider the incident “grave.” Or Netanyahu could have condemned the chief rabbi of the city of Safed, Shmuel Eliyahu, who used offensive language to insult the chief of staff and demanded that he be “called to order,” all the while praising the soldier who killed the assailant and calling him a “hero of Israel.”

Eizenkot became the punching bag of politicians on the right, who fired off unprecedented attacks to score political points at his expense. Netanyahu should have nipped it in the bud, instead of abandoning the chief of staff to the public.

Netanyahu is intimately familiar with ways to prop up a controversial figure. If he wanted to, he could have done what President Reuven Rivlin did. He could have stood by Eizenkot’s side with a few decisive but warm comments. In a speech on Monday to the Yedioth Ahronoth conference about the international boycott, Rivlin said, “I sleep much better these days, knowing that Gadi Eizenkot is the chief of staff of the IDF. I trust our army, which is one of the most ethical armies in the world, which knows how to act and which conducts itself intelligently, responsibly and with careful consideration, no matter what the matter at hand is. Our army is not an army of mercenaries. It is an army made up of our children, who are guarding our homes. I trust our army and its ability to investigate the matter and draw the right conclusions.” How simple that is to say, and how correct!

Even Aryeh Deri, the chairman of Shas, knew how to do the right thing by backing the country’s top general. He said, “Gadi is an excellent chief of staff. He is an officer with values. He is responsible and honest. The posters and the incitement against him should be condemned by everyone.”

The prime minister is a frequent Twitter user. He posts on Facebook daily. The fact that he did not see fit to post anything along those lines speaks volumes. Furthermore, as time goes by, it seems as though he supports the soldier, who (from whatever angle you look at it) executed a terrorist extrajudicially. But when Netanyahu sees Liberman with all sorts of demonstrators standing in front of the military court where that soldier’s arrest was extended, accusing the prime minister and Defense Minister Moshe Ya’alon of abandoning one of their troops, Netanyahu cannot control himself. He can’t show the slightest hint of leadership or responsibility.

Eizenkot is indeed a tough military man. Nevertheless, this attack against him has far-reaching potential consequences for the IDF as well. Traditionally, the chief of staff is one of the most popular and admired icons of the Israeli leadership, not least because of the responsibility he bears. Some chiefs of staff have been more popular than others, but they were all granted public immunity. In most cases, even politicians have taken care to pay them their due respect. That is why the process underway right now is especially worrisome. It is an attempt to delegitimize the chief of staff, draw him into the political fray, paint him as a leftist and attack his official standing and professionalism.

Fortunately, Eizenkot has broad shoulders. He can bear the weight of the attacks. The real problem is that challenging the authority of a chief of staff for simply trying to follow moral and ethical codes is not just damaging to the military. It is also harmful to the state.