Why Netanyahu humiliated his defense minister

Prime Minister Benjamin Netanyahu is willing to pay a steep price, both politically and security-wise, as long as he is not seen losing to HaBayit HaYehudi leader Naftali Bennett in the fight over the hearts of right-wing voters. 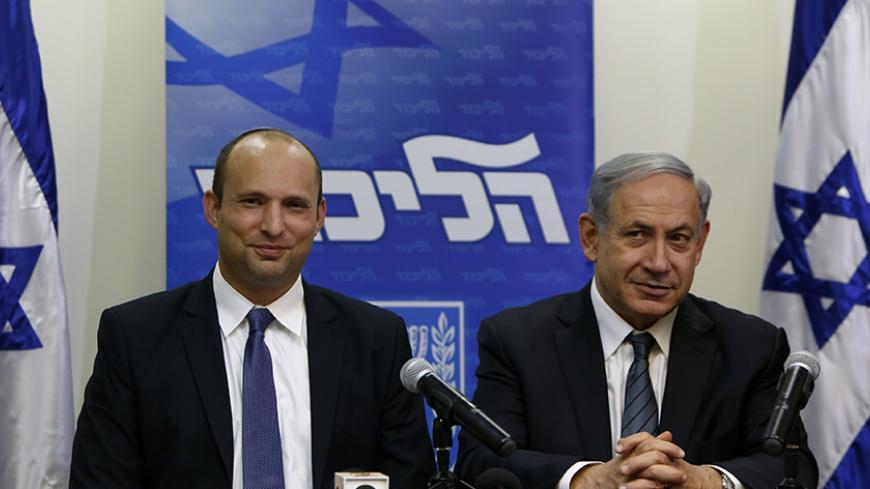 Israeli Prime Minister Benjamin Netanyahu (R) and the head of the right-wing Jewish Home party, Naftali Bennett, give a press conference at the Knesset in Jerusalem, May 6, 2015. - GALI TIBBON/AFP/Getty Images

On March 28, Prime Minister Benjamin Netanyahu phoned Defense Minister Moshe Ya’alon to order him to stop returning to the Palestinian Authority (PA) ​the bodies of Palestinians killed while attacking Israelis. Netanyahu’s order stands in stark contrast to the firm opinion of Ya’alon and many others in the defense establishment who believe that keeping the bodies will not only fail to deter potential terrorists, but might actually increase the motivation among Palestinians to launch revenge attacks.

Ya’alon was at the same time considering more than just security. He was also taking moral considerations into account. In a meeting of the Security Cabinet in October, Ya’alon had expressed his reservations about a demand by ministers from HaBayit HaYehudi and Internal Security Minister Gilad Erdan to keep the Palestinians' bodies. He reportedly said, “Israel doesn’t deal in dead bodies.” At that same meeting, Ya’alon claimed that keeping the bodies could lead to the abduction of soldiers, who would then be used as bargaining chips to obtain the bodies' return.

Israel Defense Forces (IDF) Chief of Staff Gadi Eizenkot, and Maj. Gen. Yoav Mordechai, coordinator of government activities in the territories, also argued that keeping the Palestinians' bodies would only serve to intensify the intifada. In addition, Eizenkot opposed calls from politicians to undertake collective punishment or launch military operations in the territories. He was concerned that such steps would be detrimental to security cooperation with the PA and result in the intifada spinning out of control.

So what motivated Netanyahu to make a decision counter to the prevailing wisdom among the defense establishment? What caused him to act now and release an oddly worded statement that portrays the defense minister as someone who fulfills his orders with no right to express his opposition about them even if he thinks they are damaging to the State of Israel?

Netanyahu held no discussions on the matter, as usually occurs with security issues. There was no discussion in the Security Cabinet and none in the government. Netanyahu’s office even refused to answer journalists’ questions when asked about the timing of the decision and its significance. As far as Ya’alon was concerned, however, everything was crystal clear.

Netanyahu is currently locked in a heated back and forth with HaBayit HaYehudi Chairman Naftali Bennett and his right-wing supporters over the arrest of an Israeli soldier who was recorded on video released by B’Tselem executing a Palestinian after he had been neutralized following an attack on soldiers in Hebron. At the weekly cabinet meeting March 27, Bennett accused Netanyahu and the “country’s leadership” of dancing to B’Tselem's tune. Bennett appears to have been referring to the defense minister and IDF chief of staff although he avoided naming them.

“You are confused between the good guys and the bad guys,” Bennett scolded. Netanyahu, refusing to be outdone, retorted, “Don’t lecture me about backing the IDF.”

The phone call to Ya’alon came one day after the stormy meeting. It appears the prime minister felt the heat from Bennett’s attack, so he called Ya’alon to instruct him not to return Palestinians' bodies to the PA.

This is typical behavior for Netanyahu. He refuses to be caught losing to Bennett in their fight over the hearts and minds of HaBayit HaYehudi voters or the right in general. It sometimes seems as if he is willing to pay almost any political or security price as long as he can prevent Bennett or any other right-wing figure, in or out of government, from outflanking him on the right and presenting him as failing to fulfill the interests of the settlers. There is no shortage of examples of such behavior.

One remarkable instance with particularly disastrous diplomatic consequences was Netanyahu's surrender to right-wing demands not to release long-held Palestinian prisoners, even though he had committed to doing as part of the negotiations with the Palestinians to revive peace talks. On the eve of the negotiations, Netanyahu chose to release prisoners rather than freeze construction in the territories because he believed that halting construction would lose him votes on the right, especially among the settlers.

As the fourth and final prisoner release approached in 2014, the right, led by the My Israel movement, launched a campaign against it. Netanyahu caved to the campaign's pressure, and the diplomatic negotiations fell apart. In an interview with Al-Monitor in September, Sarah Haetzni, the leader of My Israel, described the enormous pressure her group put Netanyahu under in the effort to force him to forgo the release.

Similarly, when it comes to construction in the settlements, Netanyahu has chosen his narrow political interests over diplomatic and security interests. Declarations of new construction projects whenever Netanyahu feels he is about to lose the right are regularly a go-to for him. Thus, for example, after members of the Fogel family were stabbed to death in Itamar in March 2011, Netanyahu announced that he was approving the construction of hundreds of housing units in the settlement. He was later forced to back down on his statement.

Netanyahu was at his most ridiculous following the Supreme Court’s decision in June 2012 to demolish five homes in the Givat HaUlpana neighborhood, in the Beit El settlement, that were built on privately owned Palestinian land. Concerned about losing settler support, he decided to compensate them with a “gift bag” and announced that he would build 851 housing units in the territories. Of course, this was in addition to wasting the millions of dollars to dismantle the existing, illegally built homes to rebuild them elsewhere. Ultimately, he was forced to accept the defense establishment’s position that his plan could not be implemented.

In his current battle with Bennett for the hearts and minds of the right, Netanyahu has decided to ignore the defense establishment’s position that the failure to return the bodies of Palestinians will only intensify the intifada. Despite objections by the security establishment, Netanyahu’s order stands. It seems as if, once again, he is putting his own personal interest above the national security interests of the State of Israel.

It is telling that Ya’alon, who has taken a firm, aggressive position against Bennett and his associates on the extrajudicial killing in Hebron, has chosen this time to let Netanyahu humiliate him, as if he has no position whatsoever, and will not speak up.