Secretary of State John Kerry has paid a visit to Israel amid an increasing wave of violence in Jerusalem and the West Bank, yet he has no new solutions to offer either side. 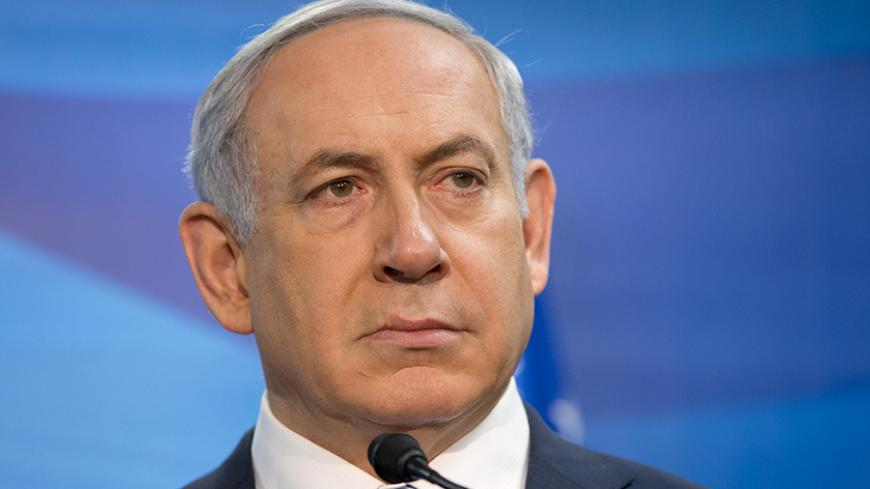 Israeli Prime Minister Benjamin Netanyahu listens as US Secretary of State John Kerry speaks to the media before their meeting at the prime minister's office in Jerusalem, Nov. 24, 2015. - REUTERS/Jacquelyn Martin

After a long absence, US Secretary of State John Kerry returned to Israel Nov. 24, almost against his will. Without good tidings, without an agenda, without a clue about what to do now, he made an appearance as a wave of terror engulfs Israeli streets, as the Palestinian Authority (PA) loses its relevance and President Mahmoud Abbas seems more vulnerable than ever.

Prior to Kerry’s arrival, Ha’aretz published a news item about how Prime Minister Benjamin Netanyahu was open to an “attractive package of measures” to strengthen the PA in exchange for US recognition of Israeli construction in the settlement blocs. In essence, it would be a request to resurrect and reaffirm a letter from President George W. Bush to Prime Minister Ariel Sharon in April 2004, about a year before the Gaza disengagement. That letter implied American recognition of demographic changes on the ground in the occupied territories. From this, one could deduce that the United States supported including the settlement blocs within Israeli territory under a future peace arrangement. What Netanyahu forgets is that Sharon received the letter from Bush after he had written the president about his intention to leave Gaza. Netanyahu, being Netanyahu, wants to get the goods but is not willing, or able, to pay the price.

A “package of measures” offered by Kerry for the Palestinians about two weeks ago included more cosmetics than surgery. It was reported that Kerry is nonetheless demanding much more than Netanyahu is willing to give, including changing the status of substantial parts of the West Bank from Area C (under Israeli security and civil control) to Area B (under Palestinian civil authority and Israel security). At the moment, there is no Israeli readiness for even this limited deal. Netanyahu is not able to pay the price for merchandise that President Barack Obama probably won’t agree to sell him anyway.

Naftali Bennett’s HaBayit HaYehudi has already announced that if even one strip of territory, or responsibility over a strip of territory, is transferred from Israel to the PA, the governing coalition will fall. Netanyahu only has a majority of one in the Knesset — 61 out of 120 Knesset seats — so he cannot entertain the possibility of even one coalition defector. Even if he were willing to take a chance, it is unlikely he would receive the goods that he demands. Netanyahu is actually unable to respond to the question of whether he will agree to freeze construction outside settlement blocs and in isolated outposts in exchange for recognition of construction in the settlement blocs. Netanyahu’s right-wing government allows him no wiggle room. In its stead, paralysis reigns. Under such circumstances, Kerry is essentially an occasional tourist in Jerusalem and Ramallah, listening to the players pouring out their hearts, and he perhaps pouring his​ out to them. Nothing substantive can come from this.

Meanwhile, Palestinian attacks continue unabated, terror that Israel has not been successful in containing, curbing or even defining. More than 20 Israelis have been killed, some of them soldiers, along with more than 100 Palestinian assailants. Israel continues to learn about the limitations of power in its efforts to cope with the wave of terror. The right is calling on Netanyahu to order the Israel Defense Forces to embark on another Operation Defensive Shield, undertaken in 2002 during the second intifada (2000-2005), to eradicate the terror threat, but its demands are irrelevant. In contrast to the second intifada, the situation involves grass-roots terror. There are no organizations involved, no attempts to organize, no terror infrastructure, no hierarchy, no commands or orders, no plans and no engineers creating explosive devices. All there is are Palestinians — typically very young ones steeped in fury and incited to a frenzy — who surprise Israelis in the middle of the street, attempting to harm them with anything that can be used as a weapon. On Nov. 23, two female Palestinian students, ages 14 and 16, used scissors to try to assault passersby in Jerusalem. One of the assailants was shot and killed, and the second one was severely wounded.

Israel has tried everything: It ordered the swift demolition of the family homes of attackers; it made it more difficult for Palestinians to enter and exit Israel; it loosened orders for opening fire; it banned the northern branch of the Islamic Movement; it suspended the mourabitoun and mourabitat from the Temple Mount; it flooded the territory with policemen and soldiers. Still, nothing has changed. The terror wave continues, like an uncontrollable mutation. It began, as reported in Al-Monitor, with tensions on the Temple Mount. It was first concentrated in East Jerusalem, then seeped into Israel inside the Green Line, returned to Jerusalem and then moved on to Hebron.

At the moment, Hebron is the terror wave capital. Most of the attackers hail from Hebron, testifying to the power of Hamas there and that Hebron is the most extreme and hard-hitting of the Palestinian cities. Israel is trying to strengthen its hand in Hebron and its satellite cities. It recently suspended work permits for 1,200 Hebronites to work in Israel. None of these steps have had a significant impact on the ground. Every Palestinian youth trying to kill a Jew who is shot by a policeman or passerby paves the way for the next shahid (martyr) in waiting, who will avenge his blood. It's an unending bloodbath, lacking all logic and without a clear narrative, except for the pathological hatred that turns Palestinian youths into potential killers willing to sacrifice their own lives. For what, it is unclear.

As of now, the terror wave seems somewhat contained. Israel knows how to live with and function under terror as long as it's the simmering type that doesn't completely disrupt daily life or affect the economy. Compared to the second intifada, this wave of violence is a walk in the park. The security apparatus is investing a lot of effort in calming the diplomatic echelons and quieting the harsh criticism of the right. On Nov. 19, a Palestinian who succeeded in killing two people in Tel Aviv was himself killed, and it was discovered he was the first such assailant to hold an Israeli work permit. This presented a dilemma, especially to the Coordinator of Government Activities in the Territories, regarding the tens of thousands of Palestinians who work in Israel on a daily basis and collectively support hundreds of thousands of family members in the territories. Should they be prohibited from the option of earning a living to reduce the risk? At this stage, Israel is containing the event and has not significantly reduced the number of work permits, but if additional Palestinians follow in the footsteps of the terrorist from Tel Aviv, there will be a problem.

Netanyahu has no solution up his sleeves. He scatters public statements to the four winds railing against incitement and promises that “we’ll win this round too.” At the moment, the feelers between Netanyahu and opposition leader Isaac Herzog about the Zionist Camp joining the government are leading nowhere. Netanyahu faces increasing terror, harsh criticism from the right and ongoing concern about losing his electoral base. Thus, it will be hard for him to bring in Herzog, change the basic principles on which the present government stands and emerge from the depths of the right to appeal to the political center. Netanyahu is stuck with the right, Herzog is stuck with the center, the Palestinians are stuck without hope or prospects on the horizon, and the Americans are stuck betwixt and between. This is the depressing reality, although far less depressing than what is taking place in other parts of the Middle East — for example, in Syria.