Israeli business leaders have called on the prime minister to end the conflict with the Palestinians so Israel can prosper, while Economy and Trade Minister Naftali Bennett claims that this will destroy the Israeli economy. 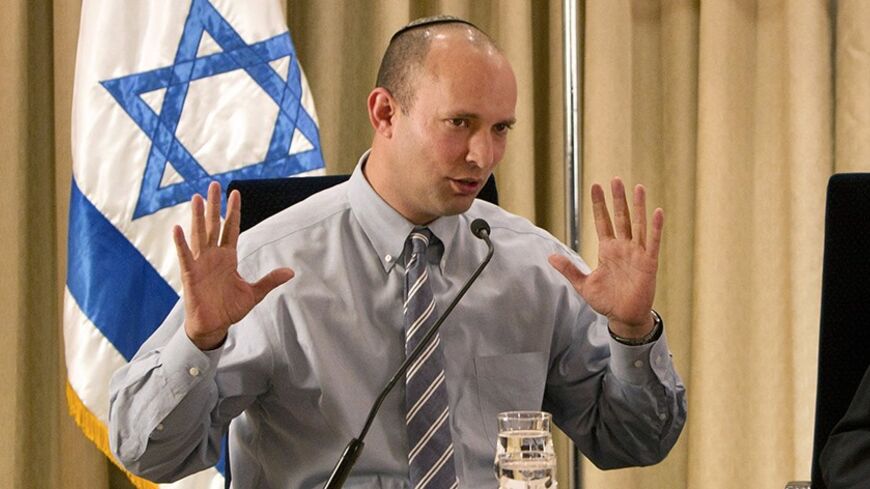 At the height of Economy and Trade Minister Naftali Bennett’s horror show at the Jan. 20 meeting of the HaBayit HaYehudi Knesset faction, Bennett histrionically approached a map of Israel that had been prepared in advance and pointed to the Judea-Samaria region. Several minutes earlier he had declared that the establishment of a Palestinian state would crush the Israeli economy and by way of explaining this sweeping conclusion, he asked the attendees to imagine the following scenario.

That same morning, a Yedioth Ahronoth headline announced that a delegation of 100 Israeli business leaders, on their way to the annual World Economic Forum in Davos were preparing to transmit a crystal-clear message to Prime Minister Benjamin Netanyahu. The report said that they will warn Netanyahu, one of the key speakers at the convention, of the widening of the boycotts against Israel as the result of the continued conflict, and of the damage to Israel’s local economic stability and growth. The delegates include Strauss Group chair Ofra Strauss, Google Israel CEO Meir Brand, Amdocs co-founder Morris Kahn and high-tech entrepreneur and venture capitalist Yossi Vardi, who has earned the nickname “guru of the Israeli Internet.”

Bennett tried to refute the appeal that emerged from the very nerve center of the Israeli economy. He publicized his own theory, according to which the very existence of the diplomatic process with the Palestinians is destructive to the Israeli economy. To everyone’s consternation, the minister’s theory was only a clumsy, eclectic accumulation of arguments, all wrapped up in intimidating words and presented on the background of visual tools such as a map and a graph. Thus Bennett argued that during the years in which attempts were made at rapprochement with the Palestinians, terror thrived and the Israeli economy suffered.

To buttress his argument, Bennett brought up the example of the economic crisis at the beginning of the previous decade. He feels it erupted as the result of the failure of the Camp David talks in 2000. “While the world economy continued to grow,” Bennett said, “the Israeli economy was coming apart. What happened? Ehud Barak went to Camp David, and immediately afterward, the second intifada began and the Israeli economy crashed.”

This is, of course, a glaring distortion. Bennett, a local high-tech prince, should have recalled that in those years, while the terrible intifada raged and caused a thousand deaths and great economic damage, the global dot-com crisis also took place. In that era, the combination of terror and the collapse of high-tech companies led to negative economic growth and rise in unemployment. But for obvious reasons, the HaBayit HaYehudi chair preferred to conceal this "negligible" event, which did not appear on the graph he used as scientific verification of his assertions. In 10 minutes of a mish-mash of slogans and fallacious statements, he tried to undermine what has been proven in the last two decades, in tens if not hundreds of research studies and reports by economic and academic research bodies: that the continuation of the occupation and absence of a diplomatic solution are bad for the Israeli economy.

Social activist Sharon Luzon, a political science and international relations lecturer in the Open University, wrote the following Twitter response to the economy and trade minister’s presentation: “Hundreds of years of liberalism and scores of years of neo-liberalism are based on the assumption that peace, and the striving toward peace, are good not only for preserving life, but for strengthening the economy and encouraging growth. It is surprising that Bennett, neo-liberalism’s poster boy, tries to have his cake and eat it, too. He praises economic liberalism, but claims that the diplomatic process is bad for economics. Perhaps he ought to go and read more, to uncover the foundation of the school of thought that he represents.”

Bennett apparently forgot that he is the economy and trade minister and a member of the diplomatic-security cabinet, and chose to use intimidating rhetoric (which the young Netanyahu had raised to an art), based on an amateurish analysis of reality. This does not exactly raise the stature of the young minister in anyone’s eyes, but even worse is the fact that his very words can wreak damage on Israel’s economy. When a high-level economic minister raises baseless and manipulative arguments, this can have repercussions on and negatively influence the state’s economy. Bennett preferred to kowtow to the settlers at the expense of the national interest, and the ad hoc economic theory he invented is merely a cover for a political campaign.

When Bennett described the economic recovery of the market after 2002, he said, “So what happened — did peace suddenly break out in 2002? No way. There was no diplomatic process. In Operation Defensive Shield, the [Israel Defense Forces (IDF)] re-took control over the cities of Judea-Samaria and from then until now, with the exception of the international crisis, we are in continuous growth.” Again, the economy and trade minister chose to omit an important detail that did not fit into his selective view of recent history: the disengagement plan of late Prime Minister Ariel Sharon. The plan, conceived in 2003 and implemented in summer of 2005, was a diplomatic act that bestowed international legitimacy on Israel and its leaders, brought investment into the country and strengthened the economy.

Not coincidentally, Bennett also ignored the diplomatic activism that characterized Ehud Olmert’s term as prime minister: the Annapolis Conference and the negotiations that followed, and Olmert’s direct contacts with Palestinian Authority President Mahmoud Abbas on his bold "Convergence Plan" that included the evacuation of West Bank settlements. Those years of economic prosperity were due not to IDF firepower, but to an atmosphere of international dialogue and credit that allowed Olmert to wage the Cast Lead operation in Gaza in the winter of 2009. This list does not even include the Oslo Agreement and the peace with Jordan at the beginning of the 1990s that opened the global economy to Israel.

I wonder if Bennett — ordinarily a wise man and sharp thinker — would have dared to make the same baseless, embarrassing arguments in front of a forum of top-notch economists and not only to the members of his faction. One way or the other, we can only count our blessings that he is not accompanying the prime minister to Davos. Netanyahu is expected to meet with Yahoo! president and CEO Marissa Mayer and Google senior vice president and chief business officer Nikesh Arora to deepen Israel's partnership with the two titans.

At least they will not have to hear economic stupidities from Israel’s economy and trade minister.