Some young Israeli right-wing politicians have mastered public discourse against the two-state solution, suggesting even annexation and citizenship for the West Bank's Palestinians. 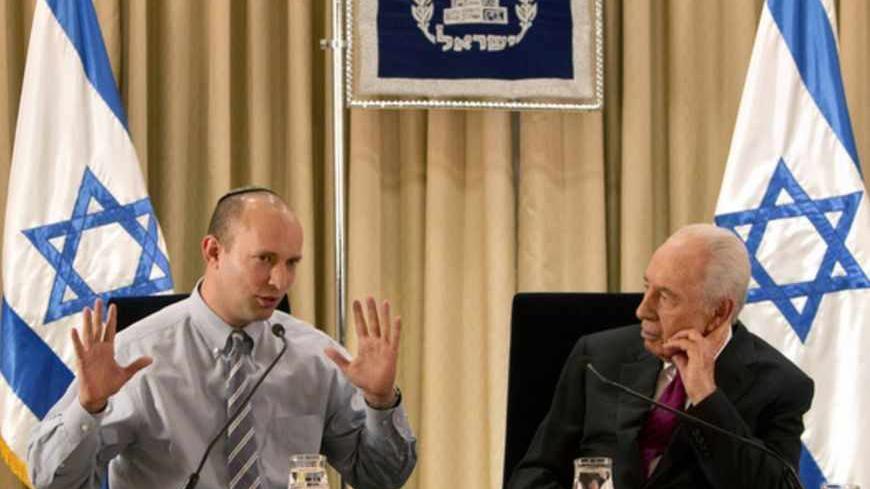 On the 20th anniversary of the Oslo Accord, the two-state solution appears to be facing its greatest challenge yet from the political right. Articulate young representatives like Minister of Economy and Trade Naftali Bennett and Knesset member Tzipi Hotovely are increasingly and successfully depicting it as an outdated and unrealistic solution.

In the two decades since Oslo, the idea of the two-state solution has become increasingly accepted and entrenched in the Israeli public mind. At its height, the idea was publicly adopted by Prime Minister Benjamin Netanyahu in his Bar-Ilan University speech in June 2009. That appeared to be an unadulterated victory for the Israeli left, whose representatives have been preaching this solution since 1967 but were for a long time considered a delusional and irresponsible minority.

After the first intifada, the political mainstream also started espousing the two-state idea. Leading figures like former minister Dan Meridor, former prime minister Ehud Olmert, Justice Minister Tzipi Livni and former defense minister Shaul Mofaz — all veterans of the Likud party — adopted it and expanded public support for the idea. At the same time, the right wing was increasingly hard pressed to market its opposition to the idea. Its main argument, the potential damage of a Palestinian state to Israel’s security interests, was not sufficiently convincing and sounded tired and dated. The fact that the right’s representatives did not offer a clear alternative did not score any points for the opponents’ camp, either.

But in recent weeks, something new appears to be happening in Israel’s political-public discourse. One can easily discern a shift in the balance of power and the vision of two states is being challenged from the right as it hasn’t been in years, despite that the two-state idea should have been flowering following the visit of US President Barak Obama and the rounds of shuttle diplomacy by Secretary of State John Kerry.

The voices of its staunchest advocates in the Netanyahu government — such as Tzipi Livni, Environmental Protection Minister Amir Peretz, Science Minister Yaakov Perry and Knesset Member Amram Mitzna — are being drowned out by the voices of its opponents.

Just a few days ago, the “darling” of the settlers, Deputy Defense Minister Danny Danon of the Likud, stirred up a storm when he claimed in an interview with The Times of Israel that if the two-state solution is put to a vote, it will not pass.

Danon didn’t say anything new. He has been repeating the same things for years, in a loud and clear voice. What is different now is the position from which these things are being said — no longer from the back benches of the Knesset but from the senior position of a deputy minister in a prestigious government ministry.

Bennett, chairman of HaBayit HaYehudi party, also set off a storm last week when he described the two-state solution as “futile.” He has said harsher things in the past, but now that he chairs a political party and is a senior government minister, his words sound different. The same is true for two other deputy ministers from the Likud — Deputy Transportation Minister Tzipi Hotovely and Deputy Foreign Minister Ze’ev Elkin — as well as coalition chief Knesset Member Yariv Levin, all of whom now hold senior offices, unlike their positions in the previous Knesset.

This is a young, articulate group that does not use strident language and comes across better in the media, unlike the veteran Likud representatives who sound like a broken and outdated record.

The new leaders of the right have also shifted the weight of their arguments. The traditional claim that the two-state idea is “a disaster for Israel’s security interests” has been replaced with the argument that “We have full rights over this land.” Bennett does it in the most natural, relaxed fashion of them all. A good friend of Finance Minister Yair Lapid, this high-tech millionaire who wears a traditional skullcap and masters the digital world is not ashamed to explain, in plain language, that the Land of Israel belongs to the Jews.

At last week’s event launching a new Knesset lobby for the Land of Israel, Bennett said to applause, “The purpose of this lobby is to present an alternative to the two-state idea.” This is a significant statement, indicating a change in public-diplomacy strategy. Bennett knows that the right’s sweeping opposition to the idea is perceived, and justly so, as hackneyed, and he therefore wants to present the Israeli public with alternatives and allow it to be the judge.

Bennett went on to say, “The justification for settlement in Judea and Samaria must be based on the argument that the Land of Israel is ours and not on other arguments … We have to stop being ashamed. Judea and Samaria are ours, not because they protect the Dan area [the center of Israel], but because our patriarch Abraham walked there.”

Bennett is, in fact, abandoning worn, defense-related claims in favor of an argument based on ideology and faith which seeks to justify our life in the Land of Israel. By so doing, Bennett does not leave room for the familiar argument between the right and the left. It is no longer over whether it’s possible to defend the state of Israel from the 1967 borders (former Mossad chief Meir Dagan reiterated this week that this is possible), but rather: “The Land of Israel is ours … according to a religious decree.”

But the right has become sophisticated not just on the road to undermining the two-state solution, but also in the presentation of alternatives. We will soon be hearing more and more ideas emanating from right-wing seminars and conferences, where discussion will be held regarding alternatives to two states. Hotovely, who took part in a conference marking the 20th anniversary of the Oslo Accord held June 20 in Tel Aviv, proposed an idea of her own: Palestinians living in Judea and Samaria will be accorded Israeli citizenship. Hotovely explained that the Oslo paradigm had crashed and it was time to abandon the two-state solution in favor of another, that being annexation and citizenship — in other words, “applying Israeli sovereignty to Judea and Samaria and granting Israeli citizenship to the Palestinians.” As for the demographic problem, Hotovely proposed solving it by bringing more new Jewish immigrants to Israel.

In the face of the energetic activity on the right, the political advocates of the two-state idea appear listless. The Labor Party and all its mouthpieces have not been successful in promoting the idea in the public discourse. Livni, too, who had excelled as a public proponent of the Idea, is having trouble delivering the goods.

Therefore, in order to survive, the two-state solution is in urgent need of a facelift.