Bibi’s Choice After Election Will Set Course for Israel

Assuming Prime Minister Benjamin Netanyahu comes out on top in next week’s elections, his choice about who to include in the governing coalition will affect Israel for years to come, writes Shai Feldman. 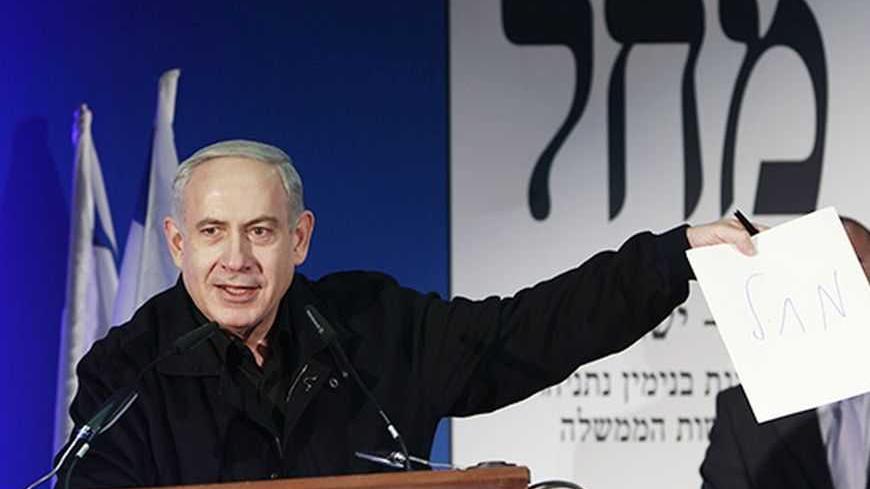 Israel's Prime Minister Benjamin Netanyahu holds up a paper inscribed with his party's initials during a campaign rally in the southern city of Ashdod, Jan. 16, 2013.
Shai Feldman
January 16, 2013

In the aftermath of next week’s Israeli elections, Prime Minister Benjamin (Bibi) Netanyahu will face the decision of his political life. What kind of governing coalition he chooses to form will affect Israel for years to come.

One option will effectively end hopes of a two-state solution to Israel’s conflict with the Palestinians and deepen its isolation. The other could open the door to negotiations and better relations with Europe and the United States.

If the real vote on Jan. 22 is anywhere close to what public opinion polls currently indicate, Israel’s domestic scene in the aftermath of the elections will reflect a grim reality: the strengthening and radicalization of the Israeli right and the fragmentation of its center and center-left. This reality is the outcome of long-term as well as recent developments.

Fourth, Likud’s Knesset representation will be further to the right as a consequence of that party’s Nov. 26, 2012 primaries. Likud moderates and pragmatists including Dan Meridor, Michael Eitan and Benny Begin lost their seats while right wing extremists like Moshe Feigelin, Danny Danon, Zeev Elkin, Miri Regev and Yariv Levin were voted in. In American political terms, what happened to Likud is analogous to the Indiana Republican primary that ousted Senator Richard Lugar.

Finally, and most significantly, the relative weight of the entire Likud-Yisrael Beiteinu bloc has declined as a result of the meteoric rise of a party to its right: Ha'bayit Ha'yehudi (the Jewish Home) led by Naftali Bennett. For many young Israelis, Bennett seems like the modern Israeli pioneer: a former combat soldier, a high-tech entrepreneur with a small fortune, a former CEO of the Council of Settlements in Judea and Samaria and a former aide to Bibi. Bennett, who calls for Israel’s unilateral annexation of 60 percent of the West Bank, may command up to 15 seats in the next Knesset.

Given these realities, what choices will Bibi have after the Jan. 22 elections? He will have two options: First, he can appeal to his base by forming a right-wing coalition built on Likud, Yisrael Beiteinu, Ha'bayit Ha'yehudi and Shas. Most members of this coalition would be to Bibi's right, diminishing his room to maneuver to almost nil.

The implications of such a coalition for Israeli policy will be far-reaching. At the very least, any notion of a negotiated resolution of the Palestinian-Israeli conflict will be rejected, settlement construction in the West Bank and Jerusalem at-large will be accelerated, and other measures will be taken to render a two-state solution to the conflict impossible. With Palestinians then giving up on resolving the conflict politically, a third Intifada will be almost inevitable. Alienation if not anger toward Israel in Europe and other quarters will grow exponentially, making it nearly impossible for Israel to mobilize any understanding for its concerns about the threat of a nuclear Iran.

Alternatively, Bibi may seek a governing coalition based on Likud, Shas and parties of the center and, possibly, the center-left. If such a coalition can demonstrate a serious effort to end Israel’s occupation of the West Bank, it would reverse the trend toward the country’s political isolation and the deterioration of its international standing. It would also be easier for Israel to gain international legitimacy for measures needed to prevent Iran from obtaining nuclear weapons.

Which of these Israeli futures will Bibi choose? Intellectually, he seems to understand that a collapse of the two-state vision will result in increasing calls for a one-state solution, and thus a destruction of the Zionist project. He also seems to appreciate that Israel’s political isolation will endanger his own vision for Israel’s economic growth.

But will his increasingly radicalized party permit him to opt for an alliance with the Israeli center and center-left? Will he risk abandoning the comfort zone of his “base” in favor of allying with centrist leaders he despises? Will he be able to find common ground with a socialist-leaning Yachimovich? Will he risk parting with religious parties that insist on exempting their constituents from military service, and ally instead with Lapid who seeks more equitable burden-sharing? Will he trust Livni not to abandon him at the first sign of a push-back in the face of tough negotiations with the Palestinians — thus leaving him high and dry? These are only some the questions associated with a more benign Israeli future in the aftermath of the Jan. 22 elections.

What will be Bibi’s choice?

Shai Feldman is the Judith and Sidney Swartz Director of Brandeis University’s Crown Center for Middle East Studies and a Senior Fellow at Harvard University’s Belfer Center for Science and International Affairs.