What is behind rising violence in Israeli Arab society?

A spike in violence in Arab villages in Israel has many claiming that police indifference is at the root of the matter, but they are not the only to blame. 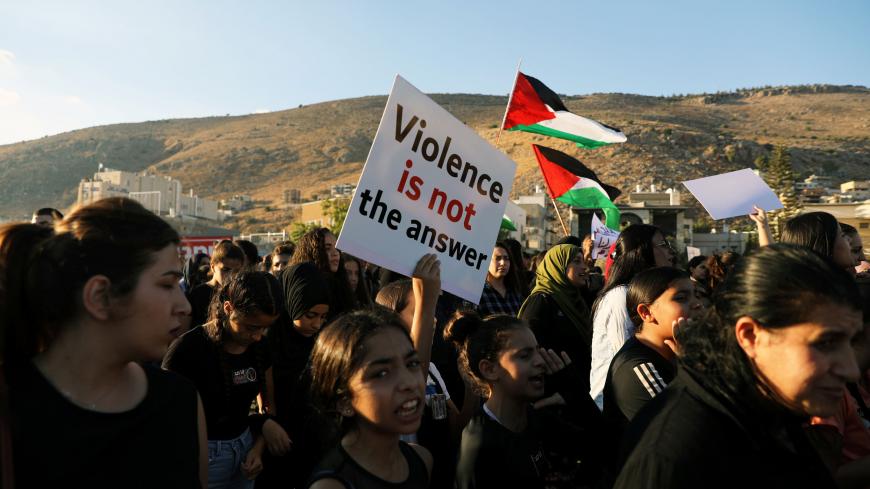 People hold Palestinian flags and placards during a protest against what Israeli Arab citizens claim is Israeli police inaction on the violent crimes in their towns, in Majd al-Krum, northern Israel, Oct. 3, 2019. - REUTERS/Ammar Awad

“I condemn the acts of murder and violence in Arab society,” Prime Minister Benjamin Netanyahu tweeted Oct. 6, after a long silence over the recent surge of violence in Arab communities. With more than 70 murders since the start of the year and over 1,300 since the year 2000, Israel’s 21% Arab minority has had enough, and masses came out to protest police inaction Oct. 4.

Ninety-five percent of shooting incidents in Israel occur in the Arab society, as do nearly 60% of the murders. From this, we get a troubling picture of the point to which Arab Israeli society has sunk.

Even Netanyahu, who generally expresses himself on matters relating to Arab society when it serves his political interests, and then usually to incite hatred, could not ignore the issue. Nonetheless, it is somewhat strange. After all, during his decadelong rule, Netanyahu allowed the monster to grow to such terrible dimensions. He should have been the first to deal with the problem and wipe out the violence and criminality, given that Arab Israeli citizens deserve the same sense of security as Jewish citizens.

The lack of enforcement in the Israeli Arab ssociety seems linked to a perception among many Israeli decision-makers that “Arab society is a very, very violent society," as stated outrageously by Public Security Minister Gilad Erdan Oct. 7. He continued, "It’s because in their culture, disputes, rather than ending with a lawsuit, end with a knife or weapon being drawn. It’s because a mother can give her approval to her son to murder the sister because she is dating a man the family does not like.”

Obviously, there is no scientific evidence to back up his observation. It is simply another racist comment of the type favored by Erdan, as reflected by his unsubstantiated claim that “arson terrorism” caused a wave of wildfires in the winter of 2016. Erdan also falsely claimed that Yakub Abu al-Kiyan, a Bedouin teacher Israeli forces shot dead during riots in the village of Umm al-Hiran in January 2017, was a terrorist and that his killing had foiled a terrorist attack. Erdan also falsely suggested to President Donald Trump during his visit to Israel that a traffic accident in Tel Aviv had been a terror attack.

It is interesting to compare Erdan’s comments to the March observation of one of his subordinates, Deputy Police Commissioner Jamal Hakrush, the first Arab to hold such a high rank. Hakrush heads the special administration tasked with improving policing in the Arab society. He stated, “Arab society is not violent. It is involved in 60% of the murders in Israel, but that is only by 2.5% of the Arab population. In other words, 97.5% are normal citizens. You cannot include everyone as being violent. This is a very small percentage that must be dealt with.”

Erdan’s declarations are unsubstantiated and reflect, more than anything, an attempt to evade his ministerial responsibilities. Even more damning, in an Oct. 6 interview on Kan Radio, Hakrush said, “The police have not been on the Arab street for 70 years. Now we are trying to rectify the situation.”

Israel’s Arab citizens sense that the government and police are fine with the ongoing violence, as long as it involves Arabs shooting Arabs. The mass protests are expected to continue in the coming weeks.

Ahmad Tibi, the chair of the Joint List Knesset faction, told Al-Monitor, “An Arab is allowed to murder an Arab and those responsible will keep sipping their espresso in Tel Aviv. Prior to the year 2000, the rate of violence in the Israeli Arab society was far lower than today, and today 60% of the murders are carried out by Arabs. Over 90% of shooting incidents occur in Arab communities, and since 2000, the number of Arabs shot to death by Arabs has reached 1,386. That is why one cannot claim that the increase in crime is part of our society. It is a direct result of the exclusion, lack of enforcement and the attitude toward Arab society as the backyard of the state.

"We have been calling for the past decade for the seizure of the illegal weapons in Arab communities. There is not a single town or village that doesn’t have such weapons, including high school students who hold weapons. The State of Israel, which knows how to locate and bomb trucks full of weapons in Sudan, can easily reach a Mitsubishi or Mazda carrying weapons into [the Arab town of] Umm al-Fahm.”

As for the claims that Arab Knesset members voted in July 2018 against a law authorizing the opening of police stations in Arab communities, former Meretz Knesset member Issawi Frej told Al-Monitor, “We in Meretz opposed the law because we oppose coercion. We do not oppose police stations, but we are against any law designed to coerce zoning and planning restrictions on local government. Just as we do not want local government forced to open football fields or culture clubs in Arab communities.”

Truth be told, one cannot stick one’s head in the sand and claim that only the police are to blame. How is it possible that 2.5% of the Arab population, as noted by Deputy Commissioner Hakrush, have become the face of Arab society? The time has come to examine how the violence and criminality have become such a common sight in Arab communities, and how crime families have become a haven for young people seeking an easy, quick way to make money. The parents of these young people must ask how they failed their children, and how they brought them up to walk around with illegal weapons.

Regarding the scenes of violence in several Arab towns and villages during the October 2018 municipal elections — the police are not to blame that this is the face of democracy in the Arab society. How did shooting in the air, with its fatal consequences, become an integral part of the wedding ceremony culture in Arab society? Undoubtedly, this is a flaw that begins at home and stems from the view that violence is a solution.

All the relevant forces in Israel, from law enforcement and legal authorities, Arab leadership and parents, must join forces to address the problem. One more thing to consider: Why does an Arab criminal allow himself to shoot and kill in an Arab community, but not in a Jewish one? He, too, knows that in Jewish communities, authorities draw the line on such behavior. If caught, he will be jailed for many years, but in Arab communities, it is a free for all.