Israeli Arabs have had enough of violence, arms

The surge in crime over the past few weeks, and especially the number of murder cases, has mobilized Israeli Arabs to declare a general strike. 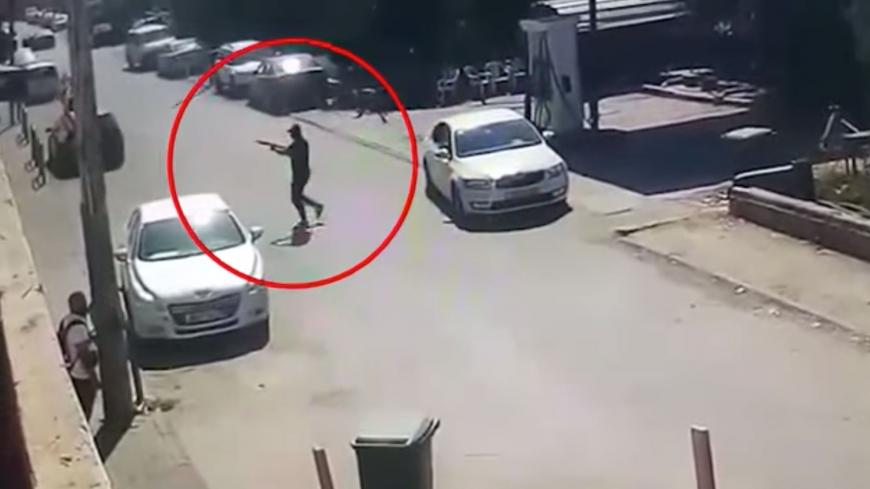 A masked man fires off rounds of ammunition from an automatic weapon on a street in Fureidis, Israel, Oct. 2, 2019. - YouTube/ynet

On Oct. 2, the Arab Higher Monitoring Committee called upon the Arab population in Israel to go on strike the next day in order to protest a spike in murder rates plaguing their communities. A video clip posted on social media Oct. 2 told the whole story in 85 seconds. It documented two or three masked young men firing bursts of automatic fire into the air from a rooftop adjacent to a family gathering in the northern Israeli Bedouin village of Tuba Zangaria. The uninterrupted echoing bursts of ammunition were clearly reminiscent of armed Islamic Jihad or Hamas combatants in the Gaza Strip.

Also on that same day, a surveillance camera in the Arab village of Fureidis caught a masked man firing off automatic bursts at a car on a street bustling with people. The footage showed a frightened schoolboy running for cover from the shooting, which slightly injured a woman who was taken to Rambam Hospital in the nearby city of Haifa. Several hours later, in the central Arab town of Kfar Qassem, an armed man broke into a local business and shot a 26-year-old woman at close range, slightly injuring her.

September was the deadliest month ever for Israel’s Arab communities at the hands of Arab criminals. According to data compiled by the Aman (Arabic for “security”) Center dedicated to fighting violence in Arab society, 13 Arab Israelis were murdered in one month, bringing the total this year to date to 56 men and 11 women. The latest murder victim on the long list was Ibrahim Mahamid, 23, a resident of the town of Umm al-Fahm, shot dead from a passing car Sept. 26.

An hour prior to the murder, Umm al-Fahm Mayor Samir Mahameed took part in a conference convened in Jerusalem for Arab mayors by the Federation of Local Authorities to discuss the eradication of the surging violence in Arab society. The event was attended by the director general of the Ministry of Public Security, former Deputy Police Commissioner Moshe Edri, as well as by Deputy Commissioner Jamal Hakrush, who heads the police administration tasked with improving policing in Arab communities. Hakrush, himself an Arab citizen, was named to the job in 2016 in order to advance the deployment of police stations in Arab towns and villages, thus far with few impressive results.

Following Mahamid’s murder, the Arab Higher Monitoring Committee decided on a series of protest measures, first among them an Oct. 3 general strike of Arab schools, institutions and businesses. Subsequently, the newly elected lawmakers of the Arab Joint List announced a boycott of the swearing-in ceremony for the 22nd Knesset scheduled for that day. The Arab Knesset members and heads of Arab towns and villages blame the Israel Police and the Ministry of Public Security for the ongoing policing failure; the Arab officials say this has enabled criminals to build up massive arsenals of weapons and ammunition.

These claims reflect a certain paradox. On the one hand, elected Arab officials have persistently conveyed to their people that the Israel Police is a hostile force that must be opposed. On the other hand, they are counting on the police force — and only on it — to wipe out the violence in their communities.

Up until the first Palestinian intifada in 1987, thousands of Arabs served in the Israel Police, mostly in Arab communities. Following the uprising, heavy pressure was brought to bear on these Arabs to resign, and most did so. At the same time, Israeli security forces, including the police, were depicted as hostile to the Arab minority. The events of October 2000, when police killed 13 Arab civilians in a wave of rioting, raised suspicion of the police to record levels and the confidence of the Arab sector in the Israel Police has never been restored.

The bloodbath that could ensue should beefed-up police forces enter Arab towns such as Umm al-Fahm and Kfar Qassem to confront armed criminal gangs and seize their illegal weapons would not be an impossible or even far-fetched scenario. Those same Knesset members and local leaders who are demanding a determined police response to violent crime could be singing a different tune once armed police enter Arab communities and arrest weapons holders.

The chair of the Arab Higher Monitoring Committee, former Knesset member Mohamed Baraka, told Al-Monitor that Arab society regards the Israel Police as a hostile entity “as described in the Or Commission report” appointed to examine the fatal events of October 2000. “These police officers take part in the razing of homes [built illegally in Arab communities], both within Israel and in the West Bank, and therefore passing the buck to the Arab population is far-fetched. It has nothing to do with our demand to eradicate crime. The police is not a civilian force. Still, it does not behave like a force tasked with serving the public, but rather as an oppressor. Since the events of 2000, security forces have killed more than 60 Israeli Arab citizens,” he said. Baraka accused the police of conspiring with criminal organizations in order to lead to the internal disintegration of Arab society. “This is a long-standing goal of the regime,” he said.

Asked whether he truly believes this conspiracy theory, Baraka answered in the affirmative. “Certainly. When they [police] decided to eradicate crime in [the northern Jewish town of] Nahariya, they were successful, as they were in [the Jewish town of] Netanya. When the state decided to bomb targets in Syria, it scored precise hits. What, they don’t know who possesses weapons? After all, Minister Gilad Erdan says 90% of the weapons originate with the Israel Defense Forces. Is this a hidden trickle?” Erdan is the minister of public security.

Baraka was unable to resolve the contradiction between his claim of alleged police cooperation with organized crime and the public Arab demand that the police, and only the police, wipe out violence in the Arab sector. Also noteworthy is the fact that not all local Arab leaders and Arab Knesset members share that same conspiratorial view held by the head of their top leadership body.

Brig. Gen. (res.) Meir Elran of the Institute of National Security Studies, who heads a program researching the relationship between Arab society and the country’s Jewish majority, told Al-Monitor that the main problem is the reluctance of the Israel Police to enter Arab communities. Therefore, he said, any enforcement activity should be preceded by contacts and discussions among those involved. “The only way to eradicate the phenomenon of violence in Arab society is to create public commitment and mobilize the cooperation of residents, local government and the police,” he added.

He said the Institute of National Security Studies is formulating a soon-to-be-unveiled plan proposing the formation of local associations, under the auspices of local government bodies, bringing together police, clerics and social workers. These would precede the entry of any police force into targeted areas to seize weapons and enforce the law. The plan also calls for establishment of a local entity in every Arab community whose task would be to restore confidence in the police. Elran said the state must aid the establishment of these organizations as a prime national interest, since the violence and murders could end up spreading to Jewish communities; one can already see some cooperation between Jewish and Arab criminal gangs. “Everyone understands that things have gone too far,” he said. “The Arab leadership understands that law enforcement must be allowed to enter and do its job, but it is not a one-off. It requires preparatory work.”