Demonstrations in the Arab-Israeli town of Umm al-Fahm spun out of control, and accusations of excessive force by the police have reached the Knesset. 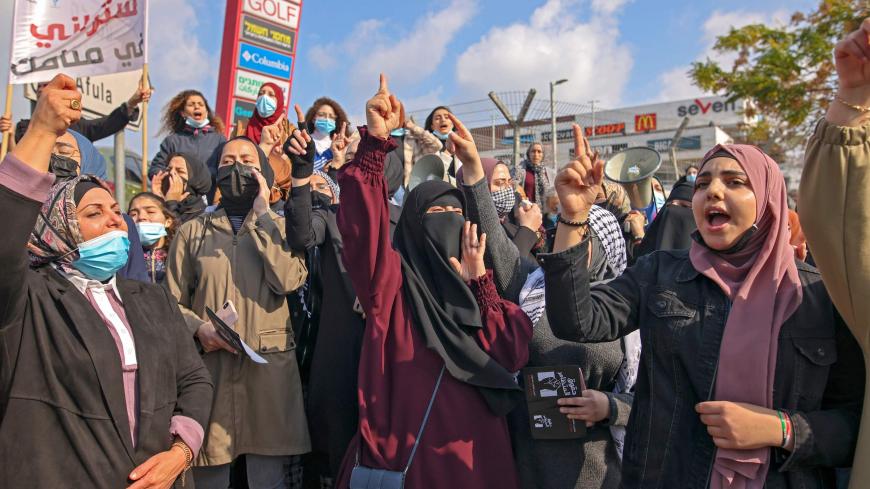 Arab-Israeli women take part in a protest after a student was killed in a reported police shootout this week, in the northern Arab-Israeli town of Umm al-Fahm on Feb. 5, 2021. - AHMAD GHARABLI/AFP via Getty Images

Early this January, armed assailants shot the former mayor of Umm al-Fahm, Suleiman Aghbariah, leaving him seriously wounded. In response, the people of the city have gathered every Friday after prayers for the last eight weeks to protest the wave of violence and crime inundating Arab society and an alleged absence of police efforts to enforce the law in the country’s Arab towns and villages.

The spontaneous protests were eventually taken over by the town’s youth movement known as al-Haraq al-Fahmawi al-Muwahad. This Friday, things spun out of control. When clashes erupted with the demonstrators, the police apparently resorted to using tear gas, rubber bullets and stun grenades. Knesset member Yousef Jabareen of the Joint List and current Umm al-Fahm Mayor Samir Mahameed were among some three dozen people who were injured by stun grenades or rubber bullets, with one young man evacuated to Haifa’s Rambam Hospital. After surgery, he is now in serious but stable condition.

According to a statement by the Israeli police, “The protests were marked by disturbances which included attempts to block the entrance to the city and Route 65. Rocks were also thrown at the police, leaving one officer lightly injured.” However, this statement seems to contradict several videos posted on social networks that show police shoving demonstrators, including men and women alike and a number of elected officials.

The Arab public was outraged, mostly at the police. There have been calls for a commission of inquiry to investigate the incident. The municipality announced that it was freezing all community policing initiatives for the next two weeks, while the youth movement began organizing next Friday’s demonstration, which is planned to include participants from across Arab-Israeli society and not just local residents.

After receiving medical attention for his injuries, Jabareen had his office send a statement to Al-Monitor, “Ruthless and racist police attacked non-violent demonstrators who were doing nothing more than demanding that they be kept safe from this wave of crime. City leaders and I were injured by stun grenades. The commander of the Umm al-Fahm Police must resign immediately. The entire Arab sector is demanding that. The police show strength when dealing with protesters and weakness when dealing with criminals, but that will not break us. We will continue to protest.”

There is no doubt that these events could be a turning point for the Arab public with the March elections just three weeks away. So far, both the Joint List and Ra’am, which left the coalition, have struggled to convince Arab voters to participate. In earlier contests, Prime Minister Benjamin Netanyahu’s incitement helped them win the trust of Arab voters and get them to the ballots. Alleged police violence in Umm al-Fahm is likely to do the same.

A Channel 13 poll published March 2 showed an anticipated rise in voter participation. It is now approaching 59%, up from 53% for the past few weeks. A debate on crime in the Arab public was held March 1 during the Knesset’s pre-election recess. The debate was initiated by the Joint List and 25 Knesset members including lawmakers from Meretz and Yesh Atid insisted that the Knesset address the issue of crime in Arab towns and villages and also the incidents in Umm al-Fahm.

Yesh Atid chair Yair Lapid tweeted, “What happened at the demonstration in Umm al-Fahm cannot go unanswered. Citizens who took to the street to demonstrate against violence in the Arab society were injured, including a Knesset member. The police are operating under difficult conditions, but that does not justify police violence.”

These remarks suggest that the leader of Yesh Atid is adopting a new approach toward Arab voters and Arab society in general. In the past, he would have been reluctant to make such a statement. Now, he quickly spoke up after the incident. Finally, after many long months, the government approved a 150-million-shekel ($45 million) budget to combat crime in Arab communities.

What do the people of Umm al-Fahm think about these incidents? Local youth movement activist Yanal Jabareen told Al-Monitor, “The people of my city, Umm al-Fahm, have spent the last seven weeks demonstrating against crime and violence in Arab society and against the inability of the police and government to eliminate organized crime. The violence last Friday reminded us of the live fire and snipers during the protests of October 2000. That incident marked a significant break in the relationship between the Arab sector and the institutions of government.”

When asked whether the events will have an impact on the upcoming election, Jabareen said, “Of course it will. [Ra’am leader] Mansour Abbas has proved himself to be weak. They’ve already started disseminating older videos of him praising the police. On the other hand, it is too early to tell whether there will be a rise in the number of Arabs going to the polls.”

In contrast, Kafr Qasim resident Mahmoud Frej told Al-Monitor, “I don’t think that it will have any impact at all on the movement of votes from the Joint List to Ra’am or vice versa. Anyone voting for Ra’am believes in this new approach, which contends that the police are the solution, and that we must change our strategy and work through the government. In contrast, people who support the Joint List tend to identify with its constituent parties. This means that even if the incidents have an impact, it will be marginal at best.”