Can Arab politician Mansour Abbas harness public anger against crime to the extent that his Raam party can pass the Knesset threshold and win four seats? 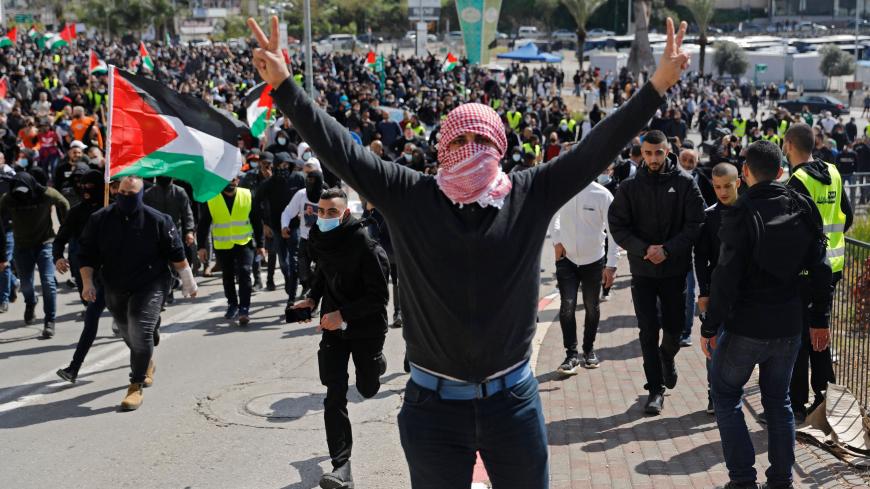 A protester gestures during a demonstration by Arab Israelis in the mostly Arab city of Umm al-Fahm in northern Israel on March 5, 2021, as demonstrators march against organized crime and calling upon the Israeli police to stop a wave of intra-communal violence. - AHMAD GHARABLI/AFP via Getty Images

Demonstrations against crime in Israeli Arab towns and villages continue. Many people say police and authorities are doing little to cope with a phenomenon that has cost the lives of many in recent years.

An especially large demonstration took place Feb. 26 in the town of Umm al-Fahm. During that protest, altercations broke out between demonstrators and police. The police reaction led to the wounding of Mayor Samir Mahamid, Arab Knesset member Youssef Jabareen and 35 others. Demonstrators then accused police of using excessive force against them, including the use of tear gas, rubber-coated bullets and stun grenades.

On March 5, another demonstration was organized in Umm al-Fahm. In light of the many protesters expected, police announced the closure of Route 65 to vehicles. Police said they were taking this step to enable all protesters to arrive at the site designated for the demonstration. And indeed, many people arrived, including quite a few Jewish participants who came to express solidarity with the crisis of the Arab public in the fight against violence and crime. In all, over 10,000 people participated in the protest.

But the Arab community hasn’t stopped bleeding. On March 9, there were three shootings in the towns of Jaljulya, Sakhnin and Jedadya-Makr. Mohammed Abed Alrazik Adas, a 14-year-old boy, was shot dead, and a 12-year-old boy was severely injured in the shooting in Jaljulya, which took place a few dozen meters from a police post. The municipality of Jaljulya called a general strike and an emergency meeting for March 10.

Following the March 9 shootings, Arab Joint List party Chairman Ayman Odeh blamed government neglect for the situation. “The abhorrent criminals are those who pressed the trigger, but the policy of criminal neglect on the part of the government is no less to blame,” he tweeted.

Among the thousands of demonstrators who came to the huge demonstration at Umm al-Fahm was the chairman of the Arab party Raam, Knesset member Mansour Abbas, who came under attack from several protesters who tried to prevent him from taking part in the demonstration. They cursed him, shouting, “Get out, traitor!” This was in reference to his party's leaving the Joint List and adopting a new strategy of cooperation with Prime Minister Benjamin Netanyahu and his government. Other protesters defended Abbas and confronted those who tried to drive him away.

Abbas said those who confronted him were a handful of individuals who belong to the other parties who are not from Umm al-Fahm. The municipality of Umm al-Fahm condemned what happened with Abbas, saying, “In the name of city residents we reject the attack on Knesset member Abbas and condemn this act. The city of Umm al-Fahm is open to Knesset member Abbas as it is open to every member of the Knesset from every party, Arab and Jewish. The protest was meant to say 'no to violence' and what happened here was violence.”

That being said, could the attack on Abbas actually help him and his party pass the vote threshold? According to a News 13 poll published March 9, Raam would win four seats, the minimum to enter the Knesset, while the Joint List would win eight. Israel HaYom and an i24 News poll published this week also indicated Mansour Abbas would pass the vote threshold and get four seats. This could point to a kind of trend where a significant part of the Arab community identifies with him and his new political line.

But what do people in the Arab community — those who are not politically active — think? Bahaa Abu Mukh of the Arab town Baqa al-Gharbiya told Al-Monitor, “First, we should note that the Arab community is not violent despite the violence that has raged in recent years, and that the Arab public has always known how to solve problems peacefully and with tolerance. But the attack on Mansour Abbas for the political position he took or a political line he adopted could lead to a wave of support for him, since such an act is unacceptable and unreasonable, and during a demonstration against violence, no less.”

Eman Safady, a publicist and media personality in the Arab community, told Al-Monitor that the attack could have an effect in two ways. “First we should say that the whole Mansour Abbas festival is part of a political strategy on the part of Netanyahu to divide and weaken the Joint List. His being attacked during the protest in Umm al-Fahm could work on two levels. On one side, there are those who would say that nothing [good] will come out of his alliance with Netanyahu. The whole violent exchange could cause some to stay away from Raam. On the other side, there are those who would vote for him because they see in him hope to save the Arab community from the wave of violence, even at the price of cooperation with Netanyahu.”

Thus, at the end of the day, the attack on Abbas could be the decisive factor that puts his party in the Knesset. No other Arab political party has dared to run alone since the higher vote threshold of 3.25% was introduced. This would be quite a development since he was attacked only for a political position; still, many in the Arab public are disgusted at how some Arab political activists all too often call anyone who doesn’t agree with their political views a “traitor and collaborator.”