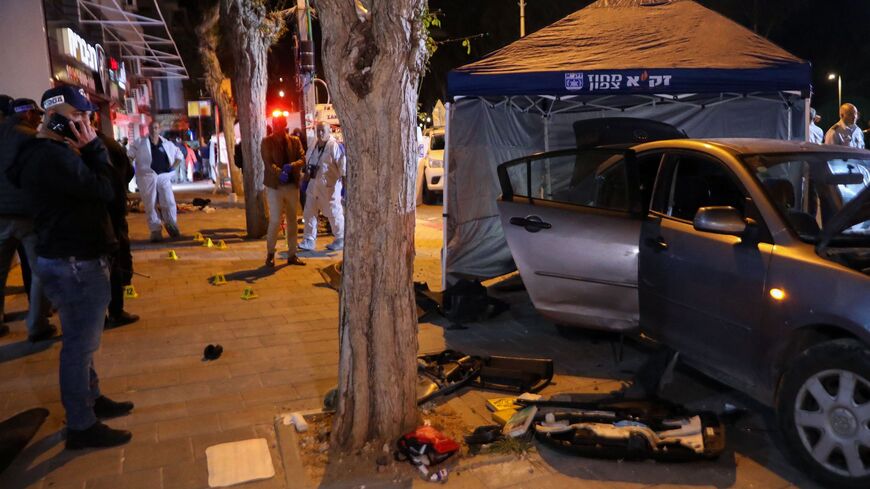 Israeli security forces gather at the site of an attack that left two Israeli police officers dead in the northern city of Hadera on March 27, 2022. - GIL COHEN-MAGEN/AFP via Getty Images

Two of Israel's border police officers, Yazan Falah and Shirel Aboukaret, were killed March 27 in a shooting in downtown Hadera. The incident was Israel's second terrorist attack in a week, after four Israelis were killed March 22 in a combined vehicular and knife attack in the southern city of Beersheba. A third attack took place tonight in the ultra-Orthodox town of Bnei Brak, in the center of Israel. An assailant shot and killed five civilians. Contrary to the March 22 and March 27 incidents, Tuesday's attack was not carried out by an Arab Israeli, but rather a 26-year-old Palestinian from Jenin.

In the two first cases, the Arab Israeli assailants were inspired by the Islamic State. The two shooters in Hadera were residents of the town of Umm al-Fahm. One of them was accused of attempting to join the Islamic State in 2016 and sentenced to 18 months in jail. The assailants made a video of themselves pledging allegiance to the Islamic State that security forces have confirmed is authentic. The attacker in Beersheba is a resident of the Bedouin village of Hura who was sentenced to four years in prison in 2016 for participating in gatherings of Islamic State supporters.

Both attacks were condemned by political representatives of the Arab Israeli community, including the municipality of Umm al-Fahm, the Hura Local Council, the Joint List, the Ra’am party and even the High Follow-Up Committee for Arab Citizens of Israel, whose announcement received backing from the chair of the Northern Branch of the Islamic Movement, Sheikh Raed Salah.

The attack in Hadera, however, showed that Arab society in Israel is not as homogeneous as it is depicted among the Jewish public. Jewish Israelis tend to relate to Arabs as a single bloc with a single opinion, but nothing could be farther from the truth.

The people responsible for the attack in Hadera were residents of Umm al-Fahm. One of the victims, Yazan Falah, was a resident of the Druze village of Kasra-Samia in the north. The head of the emergency department at Hillel Yaffe Hospital in Hadera, where the injured were brought, was Arab physician Dr. Jalal Askar of Baqa al-Gharbiyyeh. The perpetrator of the attack, one of the victims and the doctor who managed and addressed the media about their care were all part of Israel’s Arab minority.

Sheren Falah Saab, a journalist with Haaretz who is related to Yazan Falah, tweeted, “This is one of the worst days for the Falah family, my family. No words can express how terrible and painful the shock, the tears and the sense of helplessness that struck the family really feels.”

Umm al-Fahm Mayor Samir Mahameed said in an interview on Israel’s 103FM, “Murder is to us a red line that must never be crossed.”

Chair of the Joint List Ayman Odeh went further, saying in an interview to Channel N12, "IS is first of all our enemy as Arabs before it is the enemy of any other people."

There is some consensus among Arab Israelis. The vast majority of Israel’s Arab citizens loathes the Islamic State and its extremist ideology, as was evident in a 2016 study by the Institute for National Security Studies that stated, “All factions and groups within the Arab population and its important political and religious leadership have condemned the Islamic State openly and explicitly.” Nevertheless, this has not prevented large parts of the Jewish public particularly those on the right of the political spectrum, from taking political advantage of the attacks.

For instance, opposition leader Benjamin Netanyahu tweeted that Prime Minister Naftali “Bennett’s weakness is costing lives. After they abandoned the Negev to Ra’am and the Islamic Movement, now they are abandoning the residents of the Negev to bloodthirsty Islamic terrorists.”

Bezalel Smotrich, chair of the Religious Zionist party, posted on Facebook, “This government, which sold the Jewish state to the anti-Zionist supporters of terrorism and enemies of Israel in the Islamic Movement, is providing great hope to many Arab Israelis, with their aspirations to destroy the State of Israel. In the last few months, the Arabs have come to feel that they are masters of the land and in control of the government and the state. Abbas is their strongman. Everything happens at his command.”

Arab singer Valerie Hamati was born in Jaffa, she was scheduled to appear at the March 28 Negev Summit before the foreign ministers of the participating countries. After her performance was canceled following the attack in Hadera, she posted on Instagram, “Hatred is not resolved by fanning hatred. When missiles are fired on Israel, my family and I are also afraid. We also take shelter in our safe room. When Netta Barzilai wins Eurovision and everyone jumps on her happily in Rabin Square, I also scream in happiness and cry my heart out with pride.”

Ali Zahalqa, a former educator from Kafr Qara posted his condemnation of the attack on Facebook. He told Al-Monitor, “The tragedy in which we live is … that the murderers were Arabs, the murder victim was Arab, and the doctor tending to the victims was Arab." The tragedy, he said, "testifies to the complexity of Arab society within the State of Israel.”