The death of the Arab Israeli dream

In an interview with Al-Monitor, Knesset member Issawi Frej of Meretz accused the government of creating an atmosphere permitting the targeting and persecution of Arabs and for ignoring the problem of violence in Arab Israeli communities. 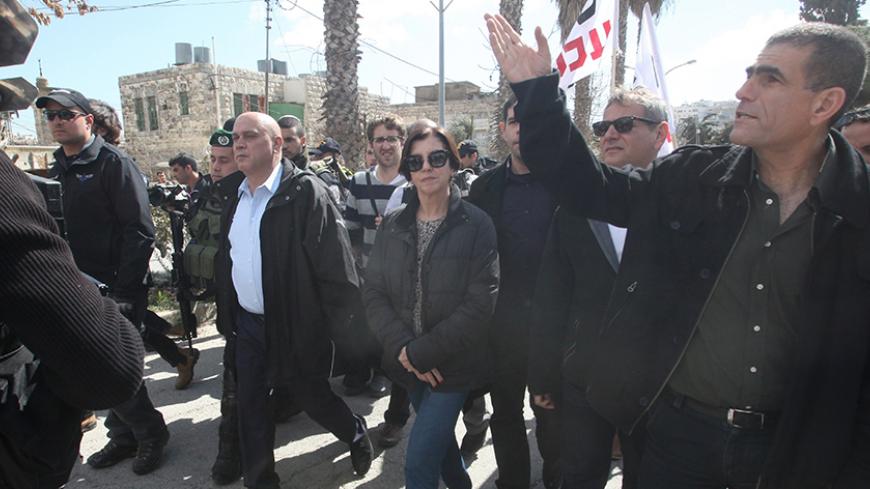 “I was in Rome a week ago. My daughter calls me up at about noon and says, ‘I’m on my way back from school, and there’s shooting on the street.’ Probably some criminal chasing another criminal. I find myself helpless. I tell her, ‘Run and hide in one of the houses.’ Another time, my little son, 7 years old, told me he was in the car with his mother and saw someone shooting ‘at God in the sky.’ I didn’t understand. My wife told me that the driver of the car in front of them at an intersection had stuck his arm out of the car, holding a gun, and started shooting upward. This all happens in the State of Israel, 10 minutes from Tel Aviv, and life goes on. This is the routine in Kfar Qasim, an Arab town in the center of Israel.”

Meretz Knesset member Issawi Frej is the person recounting this story from the State of Israel's “backyard.” Frej, an Arab, was born in Kfar Qasim in 1963 and has lived there since, as have his elderly parents. He got married in Kfar Qasim and raised seven kids there.

Sometimes a banal description of a routine event — such as a 7-year-old boy speaking calmly about gunshots fired next to him or a girl on her way from school seeking shelter from a gunfight — helps one understand that something bad is actually afoot. Al-Monitor’s interview with Frej offers a firsthand account of the state’s persistent disregard of illegal weapons in the Arab sector, a phenomenon that has been covered in Al-Monitor. Frej and local Arab leaders have been warning for years about the dangers and implications of the abundance of unregistered weapons. It was only when an Arab Israeli, Nashat Milhem, carried out an attack in Tel Aviv on Jan. 1, using a weapon that belonged to his father, that the government began to pay attention.

Every Israeli should read the interview with Frej, because it describes the death of a dream. It reveals Frej's desire, as an Arab citizen of Israel, to raise his children in an egalitarian and just society and serve the public as a politician in a Zionist party, a dream that daily crashes into the walls erected by those who set the tone in Israel these days, Education Minister Naftali Bennett and Culture Minister Miri Regev.

Al-Monitor:  How do you experience the current wave of terror as an Arab Israeli when you go home to Kfar Qasim in the evening from your job in the Knesset?

Frej:  I have a lot of conversations with my parents and older people in Kfar Qasim. They tell me that they cannot remember such a time. There’s a lot of concern. I see it in our daily life, as an Arab population that withdraws into itself, because a minority starts to protect itself in such situations. I am very sorry that we have come to this point in which the government promotes divisive policies, and the tone set by the leadership permeates every level of society.

Even irrational daily events are beginning to take over our lives. I read recently that according to a report by the OECD (Organization for Economic Co-operation and Development), we are a poorer and more corrupt society, but a happy one. How do all these things fit together? We have become a society in which abnormality is routine, so that making racist comments about the Arabs has become part of the routine. We are more racist, but happy. Things don’t occur in a vacuum. Both sides are guilty, but simple logic dictates that the sovereign, the state, is the main culprit — after all, it is the one that is supposed to enforce the rule of law. When people see the rule of law crumbling before their very eyes, they adopt jungle-like behaviors. They start taking the law into their own hands. That’s what’s happening in the Arab sector.

Al-Monitor:  Can you elaborate on how that manifests itself?

Frej:  I described my kids’ daily routine. That says it all. According to police data I got from senior officers, there are 500,000 weapons in the Arab communities. That means that there is an unlicensed gun in one out of every three Arab homes. I am in Kfar Qasim, and not a day goes by that I don’t hear shooting in some corner or other. Five, six [people] are injured every month. This month, it was five, and the families withdraw into themselves and conduct a “hudna” [truce], and then there’s calm. In other words, the police, as well, can know who was involved, but they don’t care. No one is arrested, and things go on as usual. So the citizen who sees these things understands that he shot someone, but no one stopped him, and he doesn’t have to account to anyone. He understands that he has to look out for himself. I hear from teachers at school that youngsters from upstanding families are buying weapons in order to defend themselves.

Al-Monitor:  Do you think this is part of an organized government policy?

Frej:  As long as these weapons are in Israel’s backyard, it’s of no interest to anyone. But when they move west [toward Jewish towns], then it becomes wrong. Like it was on Tel Aviv's Dizengoff Street [site of the Jan. 1 attack].

Al-Monitor:  You recently described the killing of a Palestinian girl who tried to attack a soldier at the West Bank Anatot checkpoint as “murder.” Why? The soldier was trying to defend himself.

Frej:  When I saw the video in which a 13-year-old girl was only chasing a grown soldier, an armed and trained fighter, I didn’t understand why she had to be killed. This is a girl who was running after him slowly, and you fire one bullet and kill her. This is a policy of killing, not of disabling, and the truth must be told: This is an execution. There is no other explanation for what I saw. When government ministers talk about putting a bullet between the eyes, it trickles down. I am worried that this is a policy designed to perpetuate a climate of fear, a perennial enemy, tension — all in order to justify relentless collective punishment. For all of this to happen, one has to lose all sense of morality. We have turned into an immoral society. It affects both sides: a violent society in which a soldier kills a child at a roadblock or carries out orders to conduct humiliating body searches — how does he then go home, and how will he function in life? Will this not influence his life?

Al-Monitor:  Do you go through this as an Arab Israeli in the Knesset too?

Frej:  Of course. Right-wing Knesset members are in a constant race to generate headlines and to come up with proposed legislation for persecution and incitement. It happens every day. This week, for example, we had the “frisking” law [which gives police leeway to conduct body searches without cause]. All of this anti-democratic, violent and heavy-handed legislation doesn’t do any good. The race is to see who can be the most creative in generating anti-Arab headlines. This is a distorted world in which being a patriot means persecuting the Arabs.

Al-Monitor:  Do you feel that you are able to make a difference?

Frej:  I search my soul every day and ask myself what I am doing there. I think the very fact that we in Meretz are successful in serving as the conscience and compass of a normal society, that’s the least we can do, to keep these issues on the agenda. But I fear the moment when we in Meretz, the only left-wing party in the country, will no longer be part of the political reality. This worries me greatly. I see in the Knesset that if we don’t stand up and oppose and warn, things go on. Bibi [Netanyahu] has even managed to convince the chairman of the opposition [Isaac Herzog] to follow in his footsteps.

Al-Monitor:  Herzog only said that the time is not right for an agreement with the Palestinians. He hasn’t given up on the idea of two states. How do you perceive his plan?

Frej:  If that’s how he really feels, then he’s in the wrong place. Because his plan is the exact opposite of the Labor Party platform. If this is what he believes, he should not be connected to a platform in which he doesn’t believe. It smells of racism. The minute you talk to the Palestinians about separation, as if to say, “Get out of our face,” it sounds bad. This is not how you talk to your neighbors; they aren’t going anywhere. You need to talk to them in a positive tone and not convey revulsion. This is not right, because this place will have two entities, side by side. They will be connected economically, politically and socially, and there’s no other solution.

Unfortunately, Bibi has been successful. We have become a more nationalistic state, more religious and less civil. We are an opposition numbering 59 Knesset members, almost half the seats in the house, but we are not behaving like those who are supposed to replace the government. People want to distance themselves from the left. I, on the other hand, am proud that we in Meretz are there. Portraying us as detached from reality is absurd. In this reality, you are legitimate only if you keep oppressing and don’t use the word “occupation.” Pretty soon someone will propose a bill that criminalizes the use of the word “occupation.”

Al-Monitor:  What do you think is the most significant blow to the Arabs in Israel under Prime Minister Benjamin Netanyahu’s rule?

Frej:  ​The prime minister is doing so much damage to the Arabs that it’s hard to point to one thing. But the most egregious is the Nationality Law [defining Israel as the Jewish nation-state]. That’s what worries me most. The Nationality Law prevents me from being an Israeli because I have to be Jewish, in contradiction of the principle of civic equality laid out in Israel’s Declaration of Independence. Then Bibi comes and insists on the Nationality Law, under which I become a second-class citizen. The views of HaBayit HaYehudi have permeated everywhere — “We are not occupiers, we have returned to our homeland” — and anyone who says otherwise is kicked out of the circle. He is said to be an informer, a plant, unpatriotic, an Israel hater. More and more red lines are being crossed every day.