In an interview with Al-Monitor, Joint List Chair Ayman Odeh argues that calling for the preservation of a Jewish majority in Israel excludes Arabs from public discourse. 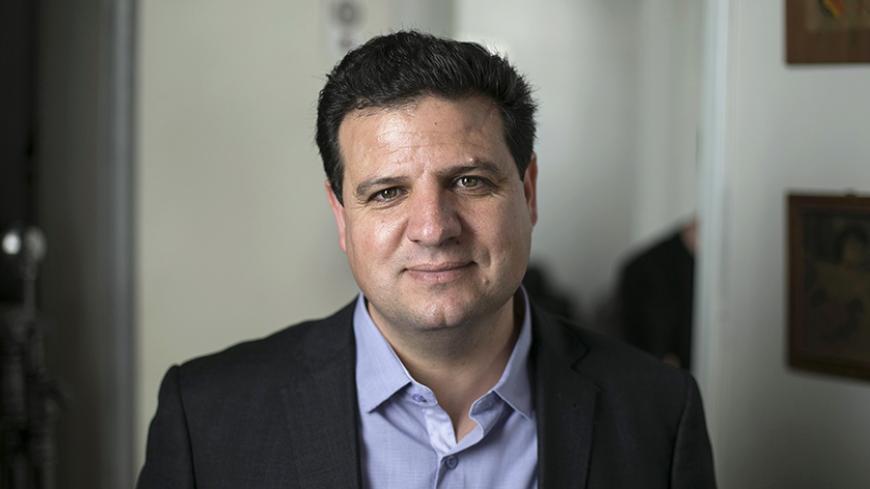 Ayman Odeh, head of the Joint Arab List, poses before the filming of a television campaign ad in Tel Aviv, March 8, 2015. - REUTERS/Baz Ratner

Ever since he was elected chairman of the Joint List, which is made up mainly of Arab parties, in January, Knesset member Ayman Odeh has set himself a goal to fight the delegitimization of the Arab population in Israel and attacks related to their citizenship by various right-wing sectors.

Since the March 17 general election and the Joint List’s electoral success — which garnered 13 Knesset seats and became the third-largest party in the parliament — Odeh has discovered that the challenges facing him are not confined only to coping with Israel’s right-wing groups that regard Arab Israelis as a menace. He also faces entire sectors in the Israeli left that share, according to him, the same offensive discourse.

During a Peace Now conference in Tel Aviv on July 24, Odeh astounded the participants by saying that while the right calls "death to Arabs," the left does the killing — which can be interpreted as "giving Arabs hell."

In an interview with Al-Monitor, Odeh cautions that if the left-leaning parties in general, and the Zionist Camp in particular, do not change their attitudes as well as the discourse toward the Arabs, the left will not be able to return to power and will completely lose its only chance of ever winning the support of Arab Israelis.

Al-Monitor:  Knesset member Odeh, is the left really “killing you”? What do you mean by that?

Odeh:  I meant what I said. The left is giving Arabs hell, and I actually referred to three incidents that left-wing governments carried out against the Arab population and never expressed regret for: Kafr Qasim in 1956 [a massacre perpetrated by the Israel border police], the 1976 Land Day [following the expropriation of lands that sparked protests during which Arab Israelis were killed], and the events in October 2000 [which resulted in the death of 13 Arabs]. All those killings were perpetrated by left-leaning governments in Israel.

Those who say that they want a Palestinian state side by side with Israel only in order to preserve a Jewish majority are being racist toward me, because as far as they’re concerned I’m a “demographic problem” for them. When [Zionist Camp leader] Isaac Herzog says that the 2005 disengagement from Gaza was justified demographically but not so from a security standpoint, I take umbrage at the word "demographic."

Even Yariv Oppenheimer, the director general of Peace Now, says he is in favor of the two-state solution because he wants to keep Israel a nation-state with a solid Jewish majority. I find this statement also to be racist toward me because I’m an Arab.

The question remains whether we — the Arabs — are partners or a menace? All those statements about a Jewish majority and demographics portray me, or even my daughter, as a menace. That’s why the mindset needs to change. There’s no doubt that the greater danger comes from the right and not from the left, but to build a genuine left — one that can return to power — it needs to consider the Arabs as a legitimate population in the country and not as some looming danger. This is the only way to bolster the peace camp in the country.

Al-Monitor:  You sound surprised by these statements, but the underpinning of the State of Israel, by definition, is a Jewish state. Those statements about demography and the desire to maintain a Jewish majority are nothing new or recent.

Odeh:  I’m not surprised, but what I’m trying to do is to build a Jewish-Arab partnership, and I’m trying to instill in the mindset [of the left] to view Arab Israelis as a legitimate population. It is perceived to be illegitimate because the left is helping the right. I understand that the right wants to delegitimize the Arabs and let them have no say, because by doing so it neutralizes some 20% of the population. The left — playing into the hands of the right by also lashing out at the Arabs and considering them to be a demographic threat — is shooting itself in the foot.

When the Zionist Camp sets out against the Arab leadership in the Knesset, I don’t take part in the commotion. But once the debate is over, I go to the office of the people who attacked us and I talk to them and explain that they’re helping the right. If they go after us instead of going after the right, they’re helping to delegitimize us. In my tete-a-tetes with them, they admit that they were noisy, that it was too much and that they understand that I’m right. So I’ll keep on talking to them and I’ll keep trying to bring about change.

Al-Monitor:  You talk about changing the mindset and you attack the left, but let me remind you of one fact: In the last elections, you — as a joint list — were opposed to a vote-sharing agreement with the leftist Meretz Party [where two parties share excess votes, to get an extra Knesset seat]. So what kind of cooperation are you talking about?

Odeh:  In regard to the vote-sharing agreement with Meretz, I admit that that was a mistake. First of all, because we lost one seat. And that would have been a very important seat. Let me remind you that this is the very seat that gives the coalition [of Prime Minister Benjamin] Netanyahu its one-seat majority of 61 Knesset members. But it goes beyond that. I’m also talking about the concept. If we can’t team up with Meretz, who else can we do it with? Back then I tried to convince my colleagues to sign a deal with Meretz, and I was critical of their position. I think today they realize their mistake.

Al-Monitor:  Knesset member Zehava Gal-On, the chairwoman of Meretz, has said that they need to think of teaming up with the left, including the Joint List. Do you consider this to be a plausible option?

Odeh:  If it’s running together in the general election, the answer is certainly no. But if we’re talking about some concrete alliances, a joint demonstration or activity for peace and for ending the occupation or for protecting the democratic sphere, then we can have shared activities.

Al-Monitor:  Once you were named the chair of the Joint List, the Israeli media was surprised by your conciliatory tone. You were described as someone who brings about a new image of Israeli Arabs. Do your colleagues in the Joint List share your placating tone?

Odeh:  I don’t agree with some of the things that my colleagues from the Joint List are saying, but you need to understand that there are disagreements. We are an amalgam of four parties that have different worldviews and ideologies. I mainly express the views of the Israeli Arab party Hadash, but I have no doubt that my colleagues accept those positions. They support me. Everyone wagered that the Joint List would be short-lived and fall apart after the elections, but the fact remains that it is going strong.

Al-Monitor:  How did you handle statements by your colleagues in the Joint List that are not in keeping with the coexistence you’ve been advocating?

Odeh:  These are concrete things that I would rather leave for our internal discussions.

Al-Monitor:  What objectives have you set yourself?

Odeh:  I’m working on two levels. At the level of awareness, I’m trying to generate a civics discourse in the State of Israel. I maintain that since 1948 to this day, the security discourse has been the dominant one. Since the 2011 social protest, social discourse has picked up. What is lacking, however, is a civics discourse. To drive my point: The Herzliya Conference [hosted annually by the Interdisciplinary Center] is a national security oriented conference, the Eli Hurvitz Conference on Economy and Society [also known as The Caesarea Forum, focused on business and economics] is an economic liberal conference, and there’s also the Sderot Conference [in the southern development town of Sderot] that deals with social issues. What we lack is one conference, the civics conference, which is what I’m trying to promote. I’m trying to advance a civics census that will be signed by 1 million citizens. It will talk about respecting different identities in Israeli society and call for shared citizenship and equality for all groups in Israel. This is the civics discourse I’m trying to push for, and with it, the legitimization of the Arab population.

At the practical level, the idea I’ve been espousing is to close the economic gaps between Jewish and Arab citizens. There’s no question that at the national level there’s a gap between us. We think that Arabs deserve collective rights, and we won’t let up on this.

Al-Monitor:  Do you think a right-wing government can be persuaded to take action to close those economic gaps?

Odeh:  Even right-wing ministers understand that there cannot be growth without the participation of the Arab population in the economy and the market. This is why from this perspective, cooperation is possible. When I talk to ministers, they say they’re willing to join forces, but obviously there’s a gap between words and actions.