The decision by Ayman Odeh, leader of the Joint List of predominantly Arab parties, to refuse a vote-sharing deal with the leftist Zionist Meretz Party might discredit his commitment to rebuild the bridges between Jews and Arabs. 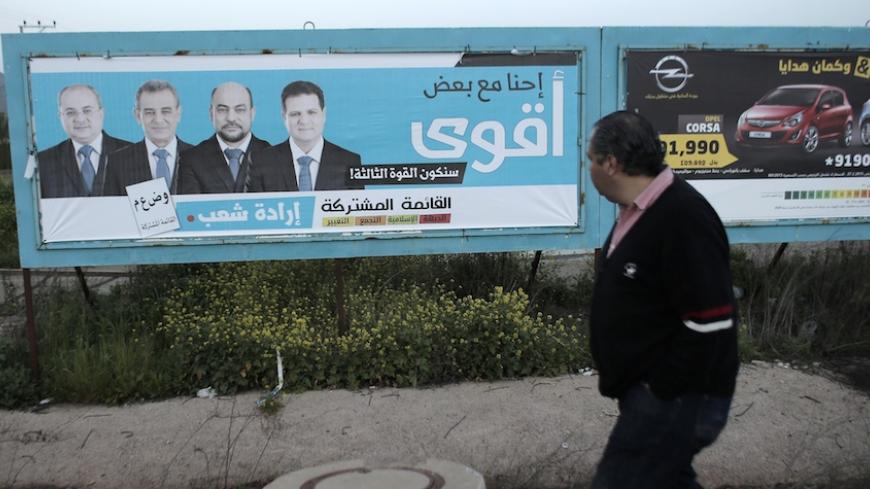 The Joint List of predominantly Arab parties has reportedly refused to sign a vote-sharing agreement with the Meretz Party, thereby undercutting efforts to close ranks between Israel’s centrist and left-wing parties. The failure of this move could cost the centrist-left bloc a seat or two in the Knesset and might very well determine who will become the next prime minister and the composition of the coalition.

According to the Israeli electoral method, vote-sharing agreements are designed to find a place for lost votes that are insufficient to form one Knesset seat. Had it not been for the refusal of the Joint List, the Zionist Camp — which recently signed a vote-sharing agreement with Meretz — would have perhaps signed an agreement with Yair Lapid’s Yesh Atid Party, while Meretz and the Joint List would have divvied up the surplus votes. Consequently, the centrist and left-wing votes would have "remained at home," namely within the bloc. But Balad and the representatives of the Islamic movement in the Joint List torpedoed the initiative, claiming that there should be no cooperation whatsoever with a Zionist movement.

To date, the unification between the Arab parties seemed to be the appropriate response to attempts by the right wing to delegitimize Arab Knesset members and pass legislation discriminating against Arab Israelis. Incitement from right-wing Israeli groups, chief among them Foreign Minister Avigdor Liberman’s Yisrael Beitenu Party — whose election slogan is “Ariel for Israel and Umm al-Fahm for Palestine” — has allegedly forced upon the Arab parties their recent unification. But despite the circumstances that prompted them to unite, there was a feeling within the Arab community that this move had a silver lining. Instead of thrusting Arab Israelis to Palestine, as some right-wing supporters hope for, they will become from now on an integral part of Israel’s political life.

Hadash and its leader, Ayman Odeh, who also heads the Joint List, have openly declared that their vision is to have full integration and cooperation with Jewish-Israeli society. The Joint List, which polls predict will be the third-largest party in the Knesset, is interested in being actively involved in the next Knesset and chairing some of its committees.

But now, the balance of power within the Joint List has been exposed and its leader's vision comes off as being practically hollow. If a joint-sharing agreement with a party that has championed human rights as well as rights for Arab Israelis (namely leftist Meretz) is something they find inappropriate, what kind of cooperation can we expect the day after the elections, and with whom? If a left-wing movement such as Meretz is considered foul, which other Knesset party would the slate consider worthy of parliamentary cooperation?

Zehava Gal-On, the chairwoman of the Meretz Party, which may barely pass the voting threshold, expressed disappointment over the decision. “The refusal of the Joint List to sign a vote-sharing agreement proves that it failed in the ultimate test of partnership,” she said. “Despite the recent voices coming from the Joint List, at the moment of truth it let the nationalistic votes set the way — nationalism and isolationism instead of partnership.”

In the nightmarish scenario of the centrist-left bloc, if Meretz does not cross the voting threshold and does not get 3.25% of the votes, four seats will be lost almost instantly, potentially determining the makeup of the next coalition. And in a way, these lost seats could have determined the future path and existence of the Joint List — the same that some Jewish left-wing voters said they would vote for. When the initiative came to naught, Odeh wrote on his Facebook page: “I believe in the politics of a broad partnership to facilitate real change in this country and that’s the road we will take, because that’s the only way for building a different future for all of us.”

Much has been written, including by Al-Monitor, about the precarious foundations of the Joint List. Its members have nothing in common except that they are Arab Israelis. It's also doubtful that their desire to survive the elections could keep them united the day after. Yet, the main question remains who will lead the group that brings together Islamists, communists, Marxists and Balad’s secular people.

Will Odeh, whose appearances in the Israeli media tried to show to Jewish society that it really is unfamiliar with the young generation of Arab Israelis, be able to maintain the line he has been championing? Or will the Islamic movement and Balad — whose manifestos, activities and provocative style have upset many in Israeli society — drag Hadash into a policy of rift and isolationism in the next Knesset?

The Joint List has the potential of changing Israel’s political map and the standing of Arab Israelis. But mainly, it can mend the fences between Jews and Arabs, which so many forces have sought to destroy.

Odeh failed in the first decision that the Joint List was asked to adopt. Now the burden of proof rests on his shoulders. He has a week before the March 17 elections, and a long, steep and daunting road in the next Knesset. During the next Knesset term he will have to rise to the occasion of possibly taking on a historic role — namely, improving the status and image of Arab Israelis in Jewish society. It all rides on him.

If he is able to keep together the tenuous slate, he will be able to bring about a true revolution that no Arab Israeli leader has succeeded in doing before him. If he fails and lets the other forces set the tone, the schism between Jews and Arabs will widen. As a result of the new conjuncture, we are no longer talking about a fringe party but rather about a slate that represents the voices of almost all of Israel’s Arabs.