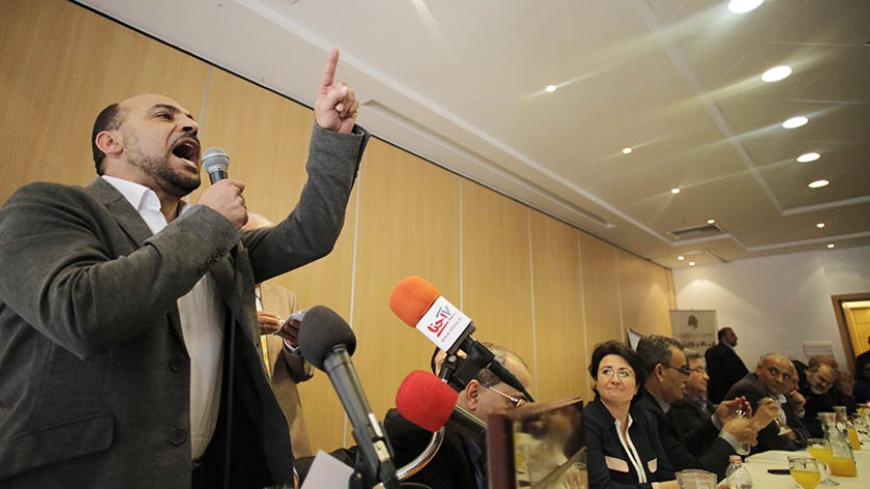 Parliament member Masoud Ghanem speaks at a news conference held by Arab-Israeli parliament members and other candidates, announcing a joint political slate of all the Arab parties that will be running in the upcoming elections, in the northern city of Nazareth, Jan. 23, 2015. - REUTERS/Ammar Awad

The unification of the Arab parties into a joint Arab slate was quite contrived. During the unification process, I spoke with several voters who declared that they would indeed support such a joint list. And as soon as the unification became a fait accompli, a growing number of voters, from the Arab sector as well as from Israeli-Jewish left-wing circles, started entertaining scenarios that until not long ago were thought to be — even among these voters — a pipe dream. If the forecasts and the polls turn out to be correct, the Joint List of predominately Arab parties could become the third-largest party in the Knesset. If a unity government consisting of the Likud and the Zionist Camp parties is formed, attorney Ayman Odeh, the head of the Joint List, could become the chairman of the opposition. By law, the prime minister is obliged to regularly update the chairman of the opposition, including on security matters.

These developments, as well as the reshuffle in the Hadash Party that placed at the top of its slate a young chairman who is calling for coexistence, have become driving factors that fascinate Jews from the left side of the political map. The much-ballyhooed enlistment of former Knesset Speaker Avraham Burg to Hadash accorded Jewish voters some sense of legitimacy. In the past, those voters were perhaps hesitant to publicly state that they would support or vote for a slate defining itself as Arab-Jewish but whose underlying base comprises all Arab streams and factions in Israel.

“We identify a 'teeny-weeny' trend, a mini trend. I’m very cautious not to say 'trend,'” Reut Mor, the Hebrew spokeswoman for Hadash headquarters, told Al-Monitor. “It’s starting to happen in the left circles. That’s also a counter-reaction to what we’ve all seen in Israel in the past two years.”

Alongside its main campaign, which targets the Arab sector, the Joint List chose to also launch an election campaign catering to Jewish voters, and it is no coincidence that Tel Aviv was chosen as the venue for its headquarters. “It was important to launch a campaign in Hebrew to rally voters from among the Jewish democratic forces,” Mor stated. “But we also want to address those who are highly unlikely to vote for the joint slate. In fact, what we want is to leverage the election campaign to legitimize elected Arab officials following many attempts at the Knesset to exclude them.”

At Hadash headquarters, they do not yet know how many Jewish voters will possibly support them. No serious poll has been conducted so far on the issue. Nevertheless, the large number of calls to the headquarters by Jewish voters, people with whom the Arab parties had no contact before, alongside an increasing number of new party activists, do indicate a distinct phenomenon. Still, the most tangible index of Jewish votes is actually the public support of the list manifested on Israeli-Jewish social networks and in the Israeli media. Should the list expect Jewish votes to garner it one more Knesset seat, or perhaps two? It is too early to tell.

"The great, positive novelty is that Jewish voters are no longer afraid; they are openly saying that they’re voting for a slate that’s identified as Arab," satirist, screenwriter and art critic Kobi Niv told Al-Monitor. "I declared this in an article in the daily Haaretz and got some 1,000 ‘likes.’ A lot of people openly stated their intentions on Facebook. To me, that’s the important thing. My vote carries a double meaning. Partly because I believe that this is the only hope for a shared life between Jews and Arabs but partly because I don’t want Arabs to feel that they’re all alone and that all the Jews are against them. I don’t think that the number of Jewish voters for the joint slate will be substantial, but that's not what's important."

Beyond these words by Niv, it’s not only the message of Jewish-Arab coexistence that attracts and lures left-wing Jewish voters to the slate, which deliberately doesn’t define itself as an Arab one. Writer Almog Bahar is one of the key activists of the New Black Panthers (which is the follow-up movement to the one that operated in Israel in the 1970s against ethnic discrimination toward Sephardic Israeli Jews). He argues that the social platform of the joint slate is the primary reason for giving it his vote. “In a far-fetched scenario — which is impossible in Israeli politics right now — I would combine the joint slate with [the Sephardic social movement] HaKeshet HaDemocratit HaMizrahit and the [Sephardic ultra-Orthodox] Shas Party. This would create a list that crosses the boundaries between social-class politics and the occupation,” he said.

Bahar added that as a youngster growing up in Jerusalem, he supported the Likud Party, "which is why I understand the bad feelings my choice is eliciting. But defining it an ‘Arab slate’ isn’t necessarily correct. It identifies itself as a Jewish-Arab slate, even if so far not many Jews have joined it."

With Bahar's statements in mind, most of the Jewish voters I spoke with, the ones who have openly declared that they will vote for the joint slate, have actually stated that they were disenchanted by the Meretz Party, which is why they have chosen a new home that promises a shared idea that can be expanded in the future.

Uri Weltmann of Haifa, a college math teacher has been a Hadash activist for the last 10 years. “As a leftist, I have huge disagreements with the kind of politics Meretz has been espousing in recent years,” he told Al-Monitor. “For example, whenever the Israeli government chooses to wage war on Gaza, like Operation Protective Edge during the past summer, it takes Meretz quite some time to wake up and say that the war is wrong. The first time Meretz came out to demonstrate in the last war was five weeks after the fighting broke out, unlike Hadash, which raised a hue and cry from day one. In fact, Meretz represents the far left side of what we call the ‘tribal campfire’ [a bonding common denominator referring to Israeli mainstream]. Hadash and the joint slate don’t want to be part of that tribal campfire, because they strongly undermine the assertion in Israel that war is inevitable.”

And yet, unlike Weltmann, among some of the left-wing Israeli voters there is still a group that vacillates between the two slates. One of them is theater director Sinai Peter.

“My dilemma is where can I better promote the struggle for Jewish-Arab coexistence,” Peter observed. “At the moment neither Meretz nor Hadash clearly answer that question. I cannot but be impressed with the remarkable energies of Arab cohesiveness. But a person like me also has a responsibility to make sure Meretz continues to exist and the question is, ‘How do we keep it?’ Meretz is in danger, facing the possibility of not passing the voting threshold. If people like me walk out on the party, it may cease to exist. That is where my indecision comes from and I believe I will remain undecided until I cast my vote.”

Yet again, the opposite phenomenon also exists. A poll by daily Haaretz on Feb. 20 indicated that about half of the Joint List voters consider Meretz as their second-in-line alternative. The pollsters explain (as has also been written about in Al-Monitor) that some former Hadash voters are reluctant to vote for a list composed of other Arab parties (such as Balad). They are considering "defecting" to the Meretz Zionist leftist party.