Why US is part of Middle East problem, not solution

Joint List head Ayman Odeh, recently celebrated as one of Foreign Policy's top global leaders, argues in an interview with Al-Monitor that the US administration is an obstacle to resolving the Israeli-Palestinian conflict. 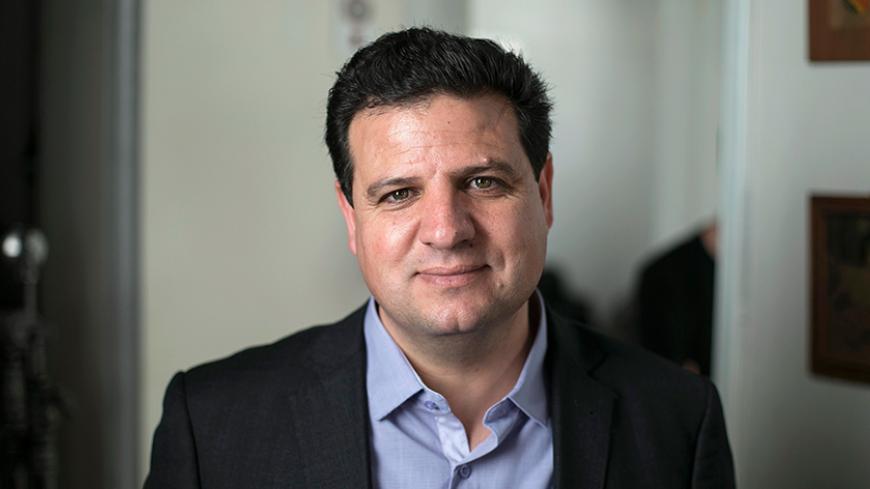 Ayman Odeh, head of the Joint List, poses before the filming of a television campaign ad in Tel Aviv, March 8, 2015. - REUTERS/Baz Ratner

In early November, Arab Knesset member Ayman Odeh, the chairman of the Joint List, received a surprising email from Foreign Policy magazine: He had been selected as one of its 100 Leading Global Thinkers for 2015. Yet, Odeh could not pop the champagne cork right away, as he was asked to keep his selection under wraps until the official announcement was made in early December. Unfamiliar to most of the Israeli public until about a year ago, he suddenly found himself rubbing elbows with Pope Francis, Russian President Vladimir Putin, German Chancellor Angela Merkel, Sweden’s Foreign Minister Margot Wallstrom, the negotiators of the Iran nuclear deal and other world leaders and thinkers.

The announcement indicates that Odeh was chosen for the prestigious list thanks to his ability to unite Israel’s Arabs. “Odeh yoked diverse leaders — Islamists, secular feminists, socialists — with a forthright argument that Arabs deserve the same rights as Jewish citizens,” it read.

Odeh called his father, a construction worker, and whispered the news into his ear so that none of his associates or aides could eavesdrop. He later drove home to tell his wife the happy news. He then had to hold his tongue for nearly a month until the magazine made the official announcement.

In early December, Odeh went on a US tour to voice his own opinions and to serve as a mouthpiece for Arab Israelis and their predicaments. According to him, the decision-makers of the world’s largest power are hardly familiar with the population that makes up 20% of Israel’s citizens.

Odeh returned to Israel earlier this week with at least one operative goal. He wants to set up an active lobby of Arab Israelis living in the United States who attended American universities and speak English. What he would like is for them to do everything they can to raise public awareness in the United States concerning the issue of Arab Israelis.

In an interview with Al-Monitor, Odeh relates that during his tours in Washington, Philadelphia and New York and after addressing various crowds and more than 20 research institutions, he has arrived at the conclusion that not only is the American establishment not part of the solution, it is in fact one of the main obstacles to resolving the Israeli-Palestinian conflict.

“These are perhaps harsh words,” Odeh tells Al-Monitor, “but it is indeed the truth. US foreign policy is predicated on interests and not on morality. They shouldn’t be selling this democracy fiction to us. Americans are best friends with tyrants and primitive leaders in the Persian Gulf — those who prevent women from driving. But all of a sudden, if there’s one Arab leader they don’t like, they take down the flag of democracy, come riding roughshod with large forces, allowing fundamentalist movements to take control over everything. We’ve seen this in Iraq, Afghanistan and elsewhere, too.”

Touching on the American conduct concerning the Israeli-Palestinian conflict, Odeh observed, “Saying that the United States has supposedly bailed out on the conflict — and that we saw this after the meeting between [President Barack] Obama and [Prime Minister Benjamin] Netanyahu — is simply untrue. It hasn’t given up. It keeps paying billions for what is called 'security' and 'Israel’s army.' All those statements about the administration wanting a two-state solution but not Netanyahu are an outright lie. The United States is pleased with what’s going on in the Middle East, selling weapons to Israel and Saudi Arabia. It is the only one that maintains ties with everyone, but the others don’t maintain any ties with each other. It stands to gain by not having peace in the Middle East, which is why I directly point a finger at the United States for being the main stumbling block to peace in the region. If the US really wants the two-state, it can force the Israeli government to act, but it doesn’t do so on purpose. When it comes to the issue of peace, it only pays lip service.”

Al-Monitor:  If that’s your opinion of the United States, what were you looking for there?

Odeh:  You know where I stand in regard to Netanyahu’s government, so what am I doing in the Knesset? I’m a person who has an opinion and wants to make a change, and I also know it can’t be done by a knockout. There are over 300 million people in America. There are African-American movements from which I have learned and still do. I’m learning from the American civil rights movement and want to knit ties with it. One of the things I’m trying to do is to tell them that there are relations between the official United States and the official Israel. But it is high time, for the first time in history, that ties were fostered between the progressive forces in both countries, for example between the Arabs and the blacks and between democratic forces in both Israel and the US. This is what I’d like to advance.

Al-Monitor:  The US also has a presidential candidate, Donald Trump, who has called on banning the entry of Muslims to the US; how do you feel about that?

Odeh:  An entire public counting over 1.5 billion people is being demonized, and that’s part of the collision between civilizations. So I hope he’ll lose.

Al-Monitor:  Had Trump invited you to meet with him, maybe to tone down the criticism about his stand on Muslims and after canceling his trip to Israel, would you have accepted it?

Odeh:  No, I wouldn’t. In principle, I’m willing to meet with almost everyone. But in every meeting I need to ask myself who would stand to gain and who wouldn’t. I don’t want people using me.

Al-Monitor:  It’s possible that Trump will become the next president. Have you taken that into account?

Odeh:  As broken down as American politics is, it still hasn’t gone that far south for a person like him to be elected president.

Al-Monitor:  During your US tour, you refused to enter the building of the Jewish Agency in New York when you arrived there to address the Conference of Presidents of Major American Jewish Organizations. Why?

Odeh:  You know how much I want to meet with people. I was told "the Conference of Presidents" and I replied, "Sure thing." Someone whispered in my ears that they are very right wing. I said, "Bring them on." I don’t need to preach to the converted. I want to talk with them. I thought I was going to address them in their offices. Suddenly at the entrance I see signs for Aliyah, the Jewish Agency and the Zionist Congress. So I asked, "Where am I?"

I was informed that that was a Jewish Agency building, so I asked if they could find another venue. Then somebody came over and in very blunt language said to me, “You don’t want to talk to us; you’re against us.” That was Malcolm Hoenlein, their president. I said, “I want to meet you, but please understand me. I won’t go in there.”

Al-Monitor:  What do you have against the Jewish Agency?

Al-Monitor:  Coming back to Israel, you evoked the idea of setting up an active lobby of Arab Israelis living in the United States in order to raise public awareness there concerning the issue of Arab Israelis. Why is such a lobby necessary?

Odeh:  As I have said before, and let me reiterate this, the United States isn’t the solution — it’s the problem. To date, there is no one unified group of Arab Israelis in the United States holding events and talking to the public in general as well as to people who carry influence and trendsetters. This is my primary goal at the moment, to set up such a body in America through which I can influence American public opinion.