Minister Ofir Akunis, who is responsible for reforming public broadcasting, tells Al-Monitor that contrary to accusations by the left, his reform plan is designed to rebuild an independent entity, reflecting more "balanced" views. 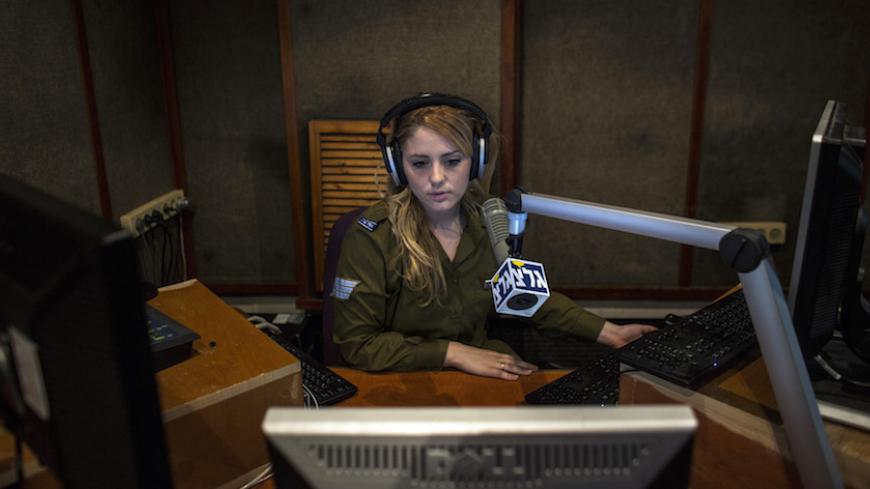 An Israeli soldier from Galei Tzahal, the Israeli Army Radio station, speaks during a broadcast session at the station's studio in Jaffa, south of central Tel Aviv, Nov. 10, 2013. - REUTERS/Nir Elias

“Israeli Army Radio should stand fully behind the Israeli position and back the IDF [Israel Defense Forces],” says Minister Ofir Akunis, who is in charge of the Israeli Broadcasting Authority (IBA) and the Second Television and Radio Authority. While Prime Minister Benjamin Netanyahu kept the Communications Ministry for himself in the present government, which testifies to the issue’s importance for him, he gave Akunis, a senior Likud member, the authority to deal with the hot potato called the “Reform of the Broadcasting Authority.” The Israeli Broadcasting Authority has been declared bankrupt and awaits structural reform. Akunis quickly became the target of attack by the opposition, who claim that he’s working to increase the right wing's control over public Broadcasting.

In an interview with Al-Monitor, the minister without portfolio explains why these accusations are “an urban myth,” arguing that the media in Israel is tilted toward the left and details his vision for a balanced public broadcasting — but surprises with the statement that the army’s radio station doesn’t have to be “balanced” but should totally back the Israeli position.

Al-Monitor:  At the beginning of September, as the government’s budget is presented, the bill for the Public Broadcasting Law will be brought before the Knesset. What’s your opinion on the harsh criticism of this law, according to which it would lead to the Broadcasting Authority’s dependence on the prime minister?

After I was appointed to this position and accepted this task, we were very close to ending public broadcasting already at the end of June. The situation was that the screen could have gone black momentarily. The law that organized the reform of the Broadcasting Authority, which was formulated in the previous government by Ministers Gilad Erdan and Yair Lapid, was problematic. Even then, before I knew that I would have this present position, I saw the problems. It’s a fact that I didn’t vote for that law, because I thought that the schedule [for restructuring the IBA] isn’t feasible and it was legislated in a hurry.

In contrast to the recommendation of many, I thought we should extend the activity of the broadcasting authority until the end of September, and at this time to introduce legal amendments that would ensure the creation of a new public broadcasting corporation in March 2016. In this respect I worked virtually alone.

In complete contrast to the false spin disseminated by political elements and special interests from within the Broadcasting Authority, we didn’t and have no intention of intervening in the content of public broadcasting, because as part of my worldview, I believe in a strong and independent public broadcasting.

Al-Monitor:  You’ve called public broadcasting workers “ingrates.” Do you regret that? After all they’re dealing with a crisis and uncertainty.

Akunis:  I saved them when at the end of June I led the extension of the activity of the broadcasting authority until the end of September. If that didn’t happen, it would have closed in 72 hours and all the workers would have been fired. I didn’t ask for thanks, because I did what I was asked to, but I didn’t expect such an attack, either. It’s unfortunate that there are special interests within the Broadcasting Authority who mislead the rest of the workers, because there are hard-working and talented workers in the authority who do good work.

Al-Monitor:  Why was it important to you to add “Israeli” to the name of the law before “public broadcasting”? Does it carry a political agenda?

Akunis:  I have to say that it surprised me that they didn’t include the word “Israeli” in the name of the law. It’s not just public broadcasting, it’s Israeli public broadcasting, and I insisted that it should be called that, just like in Canada or Britain. We don’t have to be ashamed of our nationality. I really think that even all the Israelis who aren’t Jewish — Arabs and other minorities — can feel Israeli. But even in this case they said that it’s extraneous and that it’s a superfluous declarative decision motivated by my political interests.

On this topic I’ll say the following: I’m proud of this decision and I insisted that it would be accepted as the first amendment of the law. It’s not a political, but a social decision. In Israeli society there’s a great variety of opinions and cultures and positions, and there’s no question that the small screen must reflect it. I don’t hold the view that some cultures have no place in public broadcasting, but rather the opposite. Thus, as I imagine it, I see the public broadcasting corporation that will start broadcasting in March 2016 showing Israeliness at its best: a variety of music and culture, the periphery and the big cities. Public broadcasting is for everyone.

Al-Monitor:  What do you say to those who fear the right’s political influence on public broadcasting?

Akunis:  That public broadcasting should be balanced, and reflect the variety of positions in Israeli discourse, and this isn’t a slogan. The screen should show the position of Mrs. Cohen from Sderot or Eilat or Kiryat Shmonah. I think that after the last election there’s a greater understanding that Israeli public discourse clearly leans to one side of the political map, and it’s not to the right. Senior analysts lead this worldview, and the questions of the TV hosts are biased. It’s clear. You can discern this lack of balance in political panels, where there’s always the token right-winger confronted by three or four representatives from the left, and even though it’s clear today that most of the public opposes a Palestinian state, the small screen presents things as if it’s the opposite.

In the last election we saw how most of the media stood clearly for the candidate of the other party and amplified the strength of the left-wing camp. If there were a strong public broadcasting authority, it would reflect the situation in a more balanced way.

Al-Monitor:  The Likud Party has ruled in the last few years, and public broadcasting is in your hands, so your argument that it’s not balanced sounds problematic.

Akunis:  We’ll start with the fact that the Broadcasting Authority in its current structure is too big of an organization, and we need reform in the structure itself, but it’s also an opportunity to refresh the screen and the broadcasting schedule to be more varied.

The public isn’t always aware of this, but the broadcasting schedule of the Reshet Bet Public Radio Channel hasn’t changed since 1995, and since then the media map has completely changed — including, of course, the technological revolutions. In this case I have to say that the Reshet Bet Channel is balanced. But we have to make sure it is suited to the new world and not stuck in the 1990s.

Al-Monitor:  And how do you see these things when it comes to Israeli Army Radio?

I don’t think that on Army Radio we should hear the position of the illegal infiltrator, but rather the position of the elderly resident of south Tel Aviv who was attacked this week by an illegal infiltrator. ... Also in the debate over the [2010] Mavi Marmara flotilla, I don’t need them to explain to me why the flotilla is important and right, but rather I expect full support for the side of the IDF soldiers who did their job.

Al-Monitor:  But this is muzzling freedom of speech.

Akunis:  Just the opposite. We’re allowing people to speak. But when it comes to Army Radio, which is funded by the Ministry of Defense, the station’s purpose is to be a station for soldiers.

I’m not saying don’t let others speak at all, but at least give the second side a chance to express itself. Like in the case of the illegal infiltrator — we have to remember that this is someone who broke the law and is in Israel in the position of a law-breaker. A minister in Israel can’t enter the United States without a visa, why is it OK in this case? And the media holds saccharine and soft interviews with this infiltrator. In the end, if the public gets information in a fair and balanced way, it will appreciate the activity of the free press in Israel.

I represent big constituencies and I hear complaints about imbalance everywhere. In Dimona, Jerusalem and south Tel Aviv people ask me: “Why aren’t our positions expressed?” My approach is just the opposite of muzzling. It’s democracy at its best.

Al-Monitor:  It’s no secret that the prime minister wants to change the face of Israeli public broadcasting and to control it. Is your appointment part of such a goal?

Akunis:  This is an urban myth. I’m leading the changes in legislation and my recommendations are only mine. I stand on the Knesset podium and in Knesset committees, and it’s clear that I update the prime minister, like the rest of the ministers. I’m leading the process of the creation of the new Israeli broadcasting authority and I’m determined to finish the task, so that in the coming spring, viewers at home will get better and more varied television programming, that would best reflect the great and beautiful variety we have in the State of Israel.