The unified Arab list is expected to see success in the next Knesset elections as a result of discriminatory Israeli laws, according to the head of the joint list of all Arab parties. 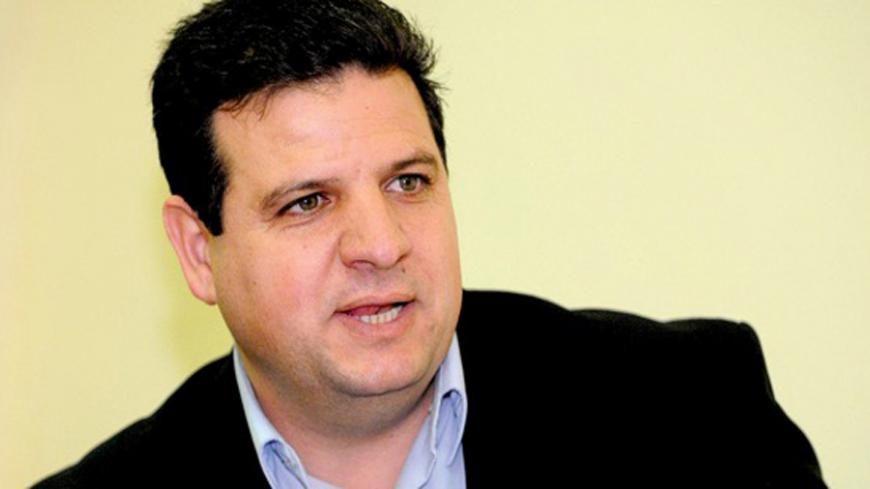 The Arab-Jewish party Hadash (the Democratic Front for Peace and Equality) has been a small but permanent fixture in the Israeli parliament for years. It usually won four or five of the 120 Knesset seats in elections, providing a fig leaf to Israeli democratic claims without being able to influence either internal or external policies. In 2013, Hadash won four seats. This "problem" is set to change in the coming elections, ironically, as a result of the Israeli right's attempts to keep Palestinian Arabs out of the Knesset.

Ayman Odeh, the head of the joint list of all the Arab parties in Israel, told Al-Monitor that the combination of racist policies and changes to the election law helped produce this unprecedented list. The unification was created as a result of “raising the threshold and an increase in racist policies and practices, which appeared in racist laws as well as the unprecedented assault on Gaza in the summer of 2014.”

Although he is not sure that the unification of democratic and peace forces in Israel will succeed in removing the government of Prime Minister Benjamin Netanyahu, Odeh says, “This new experiment is still in its early stage.” However, the Haifa lawyer hopes that “this experience succeeds and continues because of the possibility of defeating the right wing.”

While focusing on the goal of removing the ruling right-wing government in Israel, the head of the Arab list is not very excited about the existing alternatives to Netanyahu. He tells Al-Monitor, “Our fight against the occupation, racism and discrimination constitutes a democratic alternative against the nationalist camp led by Netanyahu and the Zionist Camp led by [Isaac] Herzog and [Tzipi] Livni.”

Odeh is hoping that at the very least, their efforts, along with other democratic forces in Israel, can slow or stop what he calls a “deterioration toward fascism,” which he concludes is the result of the occupation. “Ending the occupation and establishing an atmosphere of peace are the first step in ending the racial discrimination against Arab citizens as a national minority,” he says.

Odeh is aware of the challenges ahead but has focused his attention on the need to encourage Arabs to participate in the elections that will not include any competition between Arab parties. He is hoping to increase the participation of Palestinian citizens in Israel from 56% in 2013 to 70% or more in this round.

Al-Monitor:  What are the most important factors for the success of the unification of Palestinian citizens in Israel in preparation for the next electoral cycle?

Odeh:  There are a number of factors. The first is an attempt to deny the Arab and democratic representation in parliament by raising the threshold, and the second is the increase in racist policies and practices, which appeared in racist laws and schemes and last summer’s war on Gaza. The joint Arab list reflects the unity of Palestinians against the Israeli ruling establishment and the partnership with the Jewish powers, which fight occupation, racism and discrimination, and thus constitutes a democratic alternative against the nationalist camp led by Netanyahu and the Zionist Camp led by Herzog and Livni.

Al-Monitor:  The Democratic Front for Peace and Equality has always emphasized the parallel process of the paths of equality and peace. Will the list continue in the same process, or will equality be a priority due to the rise in racial attacks?

Odeh:  We believe that one of the main reasons for the increase in levels of racism is the overall crisis of the Israeli rulers due to the impasse they reached on the political and socio-economic levels. The deterioration toward fascism is the result of this crisis, and therefore, our issues cannot be separated from the major cause of our people. As the poet Tawfiq Ziad said, "The tragedy that I live is but my share of your tragedies." The parallelism of these two tracks and their connection should be highlighted. Ending the occupation and establishing an atmosphere of peace is the first step in halting the racial discrimination against Arab citizens as a national minority and not as individuals, and defeating the right-wing racial program by developing an alternative political program, based on different foundations and one that eliminates hostility to the Palestinian people under occupation and to the Arab citizens in Israel, too.

Al-Monitor:  Are voters and the Israeli political system on the verge of change in dealing with the Arab population, or do we expect very little progress?

Odeh:  All Israeli governments were bad, racist and hostile to the rights of our people, but Netanyahu and his partners have escalated in recent years the tone of incitement to the Arab population. We cannot predict the outcome today, and despite the progress of the right-wing parties in the polls, overthrowing Netanyahu is still possible. The same applies to the party of [Avigdor] Liberman, who is already in full swing due to the alleged corruption scandal that was unveiled recently, and even Meretz, which lost a lot of votes in favor of the Zionist Camp led by Herzog and Livni.

We say that the Arab population may have a decisive weight after the election, and this relates primarily to raising the participation in the vote from 56% in the last election to 70% or more in this election.

We are confident of our progress and of the increase in our representation, and we will boldly demand the reinforcing of the status of the Arab population and setting our issues in priorities, because we are tired of the government delays. We will call in the Knesset to obtain the chair of key committees and develop an action plan that includes the enactment of laws and provisions guaranteeing equality for Arab citizens.

Al-Monitor:  There are signs that many are betting on the presence of an opposition front to the extreme right in the next election. How do you see your role in the fight against the right?

Odeh:  It is premature to bet now on restoring the experience of the "blocking vote" during the Rabin era [1992-95]. But certainly we don’t depend on Herzog and Livni. At the same time, we are not neutral concerning Netanyahu's return to power — especially after the war perpetrated in Gaza — nor concerning [Naftali] Bennett's [Jewish Home], which openly calls for the annexation of Area C to Israel and stands behind the settlement activities in the West Bank and occupied Jerusalem.

Al-Monitor:  What are the main challenges that you personally see in presiding over a joint list for the first time, especially with the presence of personalities from different parties’ ideology in your list?

Odeh:  Despite the difference and competition between us, our direct enemy is Zionism. I think everyone is aware of the size of the tasks ahead of us and everyone behaves according to the required responsibility.

The biggest challenge was the formation of this list and the engagement in this partnership to overcome the increase of the threshold rate and other obstacles imposed by the right, and the bet on our existence and our representation in parliament. This new experiment is still in its early stage, and we in the front want this experience to succeed and continue because of the possibility of defeating the right.

Al-Monitor:  How do you assess Avraham Burg joining Hadash? Will his participation reduce the gap between Arabs and Jews?

Odeh:  When a Jewish man, born in the house of a Zionist leader from the Mifdal party, joins Hadash, and having presided over the Jewish Agency, then abandons Zionism and adopts the front's positions, this is considered a critical national gain and has its impact on the Jewish community and on the progressive circles, both on the quantitative and qualitative levels. Each breakthrough we accomplish in the Zionist consensus is a net gain for the cause of justice for our people. Overall, despite the induction of the ruling establishment and its arms and horns on the joint list, it has the support of the Jewish community and a wide range of anti-Zionism fighting against the occupation, racism and fascism forces. Burg’s positive step confirms the credibility of our position and our way, because this man has previous fixed convictions.

Al-Monitor:  There is fear of indifference among Arabs in Israel. What are the practical steps to prevent it, and what percentage do you hope to achieve from the Arab participation in the elections?

Odeh:  This fear is justified, especially in the absence of the usual rivalry within the Arab community. We are aware that the main challenge is to raise the percentage of the vote to 70%, and if we succeed in this, we can raise the representation from the current 12 seats to 14 or 15 seats.

Al-Monitor:  The Palestinian issue is at a delicate stage. Is there an opportunity for the joint list to bridge the gap between the Palestinian leadership and the next government?

Odeh:  The Palestinian issue is undergoing its finest and most dangerous stage in recent decades, due to Israeli and US policies and also in light of regional developments. This requires arranging the Palestinian house and promoting national unity and popular resistance against the occupation. This is our position, and the Palestinian leadership and all factions know it. This is a prerequisite for the realization of the rights of our people and for attempts to prevent the establishment of the state of Palestine.

Overthrowing Netanyahu may change the regional atmosphere and create a new opportunity to reassess serious dialogue on the path of negotiations and peace, but Netanyahu's staying may drag the region into a new abyss, especially with the growth of racism and fascism in Israel.

Al-Monitor:  The law declaring the Jewishness of the state failed in the past year. Will the current elections strengthen the issue or terminate the discussion? What is your role in dealing with the subject?

Odeh:  We believe that the issue of a Jewish state formed a convenient way out for Netanyahu, lest the political issue [of negotiations] and economic topics be part of the electoral agenda. From our side, we will confront each piece of legislation or action that affects our rights and legitimacy in our country, through the unification among the Palestinian minority on the one hand and strengthening the partnership with the rational forces of democracy in Israeli society on the other hand.

Al-Monitor:  There is a serious US-Israeli disagreement on Netanyahu’s invitation to the White House without any coordination. What is your take on this?

Odeh:  We believe that this dispute is in the trenches, the enemies of the Palestinian people. Therefore, it should not be overly relied upon because Israel has been and remains a tool of US dominance in the region and a front claw for the imperial interests and plans, regardless of the internal contradictions between them.

On the other hand, Israel's international isolation may create better ground to overthrow Netanyahu, because it concerns the economic and cultural elites and the military and security as well. Perhaps the time has come for the [Barack] Obama administration to think about stopping Netanyahu’s arrogance; the failure of [US Secretary of State John] Kerry’s efforts proved to the US administration who Netanyahu is, and this crisis comes now to reconsider what is certain and sustained with this administration. The question remains whether there will be a change in the US mentality toward Netanyahu and whether there will be any intention of an actual realization of the rights of the Palestinian people to establish an independent state.